Teams listening to a speaker midway through the conference. (Images via Dubai Internet City)

As Dubai passionately pursues its strategy to become a smart city by the turn of the decade, Dubai Internet City recently hosted eager startups at the second edition of Decode Dubai: a 48-hour hackathon to inspire local tech aficionados to create novel smart solutions that help to elevate Dubai’s smart city status.

Nearly 200 competitors - a mix of technopreneurs, coders, hackers, developers and designers - were in attendance at opening night, reflecting the city’s small yet thriving tech community.

There were also non-UAE techies as well. Irina Sushko and Neven Solidov - software developers from Bulgaria - decided to compete on a whim. Sushko blogs about her travel experiences, occasionally undertaking software development work to pay for her expenses: “I’ve travelled extensively and what so many adventurers seek, especially those in the millennial generation, is a more local, authentic experience. I figured joining the competition would be a good way to push myself to produce an app in two days.” 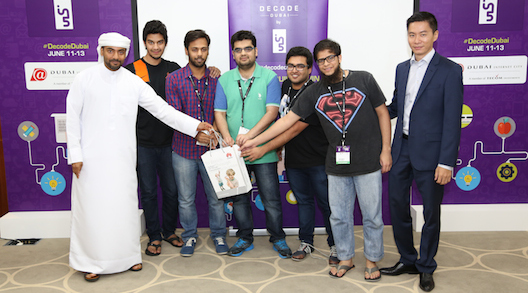 While some participants already had a team and idea, others had to pitch their ideas in the hope of finding collaborators. The majority of the 25 pitches fell into the 'shopping and retail' category. Ideas included a collaborative community wall, an intuitive dining recommendation app, a job site for physically challenged individuals and door to door auto services.

At the finale the teams presented, in a closed session, to a panel of over a dozen judges drawn from across Dubai’s government, private and startup sectors which included Marwan Salem Bin Haidar, executive director of Planning & Development for Dubai Smart Government and Majed Al Suwaidi, managing director of Dubai Internet City and Dubai Outsource Zone.

One of the judges, Ashish Sidra, VP for Innovation at telecom operator du, was impressed by the calibre of competitors.“Not only did the teams conjure innovative ideas, they were also able to apply their enthusiasm and expertise towards creating early prototypes within such a short timeframe,” he said.

The five winning teams will be paired with mentors and will spend the next three months sharpening their apps for the Dubai finals in September 2015, with one idea elected to represent Dubai at the global Smart City App Hack finale in Barcelona. 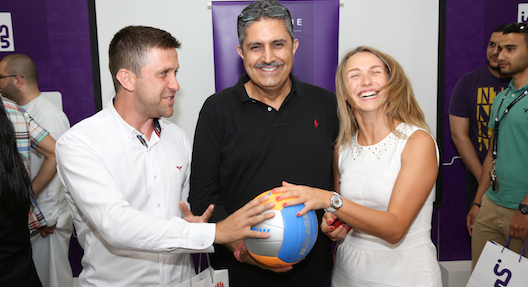 The beThere cofounders with Prashant Gulati of The Assembly.

Several competitors conjectured that the city’s relatively new, young hackathon culture can attract more participants and raise the bar for creativity and innovation, by offering more substantive rewards for winners.

Sidra believes industry hackathons offer a valuable opportunity for corporations to feel the pulse of innovation in the community and can be mutually advantageous for both entrepreneurs and big businesses.

“From du’s perspective, our biggest contribution is using our customer reach and market positioning to support relevant startup ideas to go to market. This philosophy allows young and innovative businesses to gain instant and substantial recognition with which they can establish their customer base.”

His words may bear heeding by the key players in the local corporate and entrepreneurial ecosystems to join forces and radically energize and democratize the infrastructure for budding innovators, thus enabling the city to flourish as a hotbed for tech talent.