In the 20th century, Saudi Arabia was a global power thanks to oil; in the 21st century, it might still play a dominant role - but this time through a less expected avenue: renewable energy.

MaterialSolved, a startup incubated by one of the Kingdom’s research universities, King Abdullah University of Science and Technology, is designing software to manage the performance of solar photovoltaic (PV) cells.

“Like the software that architects use to design and visualize buildings, our software will be used to design, visualize and predict PV Cells,” cofounder Amal Aboulhassan said. “We are planning to start installing the first paid commercial beta on next year.”

The first version will be tested with five to 10 international universities that have research collaborations with KAUST before taking it global to corporate research parks, Aboulhassan said.

Saudi Arabia budgeted $109 billion in 2013 for a plan to generate a third of its energy from renewable energy by 2032. Since then, centers such as King Abdullah City for Atomic and Renewable Energy (KACARE) and the Solar and Photovoltaics Engineering Research Center at King Abdullah University of Science and Technology (KAUST), were launched to help research and develop ways to create a more sustainable energy future.

KAUST is incubating student entrepreneurs working on startups in renewable energy. They’re provided with tools and support to develop their ideas and contribute to creating a cleaner environment.

Aboulhassan joined the New Ventures Accelerator program in KAUST and graduated in March. During this period, she worked on her business model, interviewed customers, filed a patent, and brought on cofounder Omnia ElSaadany. 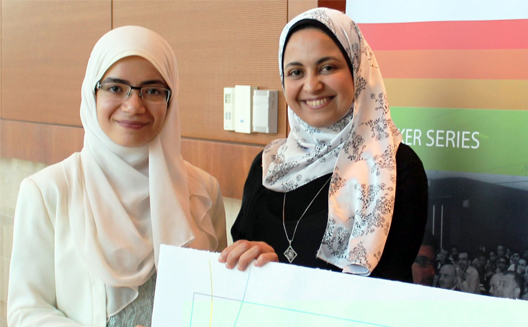 From left to right: Cofounders Omnia ElSaadany and Amal Aboulhassan

Aboulhassan talked to Wamda about what inspired her and discussed the great potential of using solar energy in Saudi Arabia.

Wamda: What sparked your innovation?

Aboulhassan: This idea is based on my PhD research. I have been working closely with the photovoltaic material scientists for three years. During this time, I found that the community is extremely in need for a software tool that meets their visual modeling needs since such a tool does not exist in the market. Omnia, my cofounder, and I have 10 years’ experience in computer graphics, virtual reality, visual computing, and visualization. So, we came up with an idea on how design a software framework that fills this gap.

Wamda: What sort of data will the software generate?

Wamda: How are you monetizing it?

Aboulhassan: We plan to sell the software either as license or SAAS. We will decide on this after launching the first commercial beta (test) to get better statistics about users’ preferences. We are also planning to sell consultancy services (mainly to scientists and researchers). This service is expected to be important because scientists are usually working on a wide range of data and requirements. Accordingly, they will need help to guide them on how to prepare the data before being used by our software.

Wamda: Why do you see a need to rely on solar tech in Saudi Arabia, now?

Aboulhassan: The world is currently relying on non-renewable non-clean resources. One day these resources will finish leaving us with a crisis. In my opinion, we need to find clean and renewable energy solutions as soon as possible. Saudi Arabia in particular needs to be part of this since it mainly depends on oil for obtaining energy as well as sustaining their economy.

Approximately 10% of Saudi Arabia’s population does not have access to the national power grid. Providing them access could require up to 20,000 miles of new transmission lines. Medium-size high-concentrating photovoltaic (HCPV) projects might be the ideal solution for providing remote villages with electricity. (HCPV), due to its modular nature, is also well-suited to support high-electricity-use complexes like hospitals or universities. Due to the high DNI (Direct Normal Irradiance) in Saudi Arabia, HCPV will most likely also compare very favorably against dual-axis tracking silicon in solar farm installations. (Dual-axis trackers are solar panels that have the ability to follow the sun’s movement horizontally and vertically)

Examples of the interest of KSA in solar energy: 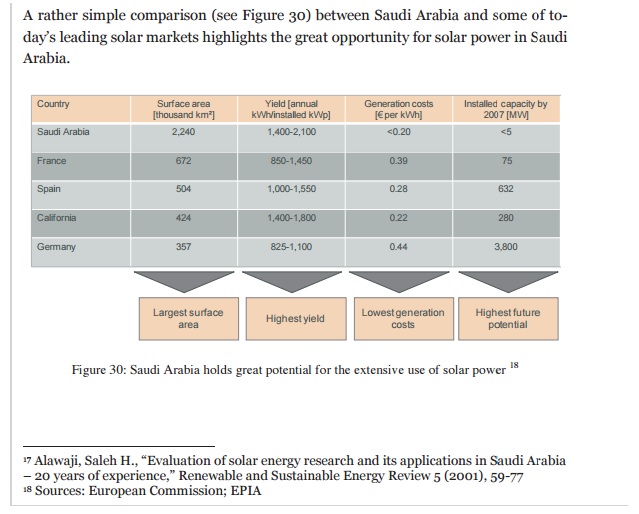 Wamda: How are you planning to take the project outside the walls of KAUST?

Aboulhassan: This software targets scientists who are working in photovoltaics in the whole world. We have already built some networks with research groups in KAUST and the US. We are planning to use this network for outreaching scientists in the first step. Then, we will extend the advertisement to more channels such as conferences.