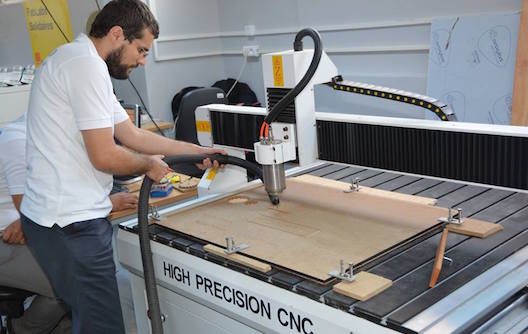 The FabLab solidaire is bringing out the heavy artillery. (Image via FabLab Solidaire)

“Tunisia has no other choices but innovation and creativity to achieve progress.”

Taoufik Jelassi, Tunisia’s former minister of higher education, scientific research and information and communication technologies, couldn’t have made it any clearer when he spoke at the International Innovation Summit in Hammamet in September 2014.

Despite a highly promising ICT sector, Tunisians do not necessarily excel when it comes to creating and innovating – partly because university graduates receive very theoretical training.

Two makerspaces in Tunisia are working to provide practical training to fill this gap.

The space has a dazzling array of machines. There are 3D printers of varying levels of complexity, Bejar said.

A mural of a shower suspended in the air, flanked by the phrase “wake up your ideas” is on the wall to the left.

And behind the visitor is the “museum” - a wall of old computers, printers, and other examples antiquated technology that dates back to the early 1970s.

This, Bejar said, serves as a reminder of “how far [AJST has] come.”

The Association Jeunes Science de Tunisie (Association Youth Science of Tunisia, AJST), is the non-profit association which opened FabLab Solidaire, with the support of Fondation Orange. 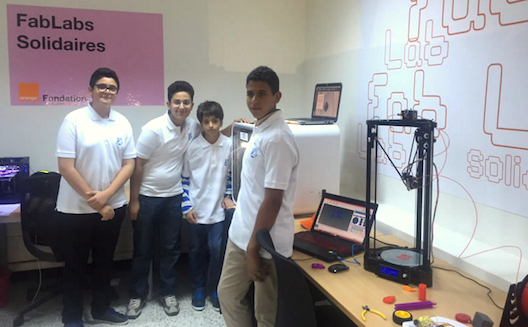 Young Tunisians are at the heart of the FabLab Solidaire. (Image via Fondation Orange)

Since its creation in 1974, they’ve been promoting science and technology amongst Tunisian youth by offering them the opportunities and resources to develop their own projects and to belong to a scientific community

“The AJST was the first association to have a computer science club […] at the end of the 1970s,” Bejar said. “The new FabLab is in line with this same logic that we must always seek out innovation and creativity.”

The FabLab’s greatest contribution, according to  Bejar, is that it pushes the boundaries of possibility for its young members. It offers youth the opportunity to develop science and tech-related projects that were previously unachievable due to a lack of resources and materials.

“It’s more simple to make a plastic prototype on the 3D printer than to make a mold and blow molten glass - which will be two hundred times more expensive - whereas with plastic we can easily test, replicate and show the prototype,” Bejar said.

But why use the word “solidaire” (solidarity) in the fab lab’s name?

“Solidarity because we are integrating an element of openness,” Bejar explained.  “[The fab ab] is not restrictive – it’s for the community, it’s for apprenticeship… it is very much a public initiative.”

And Bejar is not alone.

Mariem and Abderrahman Ameur, a dynamic duo with computer science/marketing backgrounds, have been running their small makerspace, elFabLab, out of La Marsa in Tunis’ suburb, since January 2015.

Although elFabLab isn’t nearly as expansive as FabLab Solidaire, it is immediately clear that this does not hold back its creative activities.

Indeed, the creative process is in full-swing – Abderrahman and his team are building a set for a Star Wars remake that they will be filming in Matmata, a filming location for Star Wars Episode IV, later in the week. The room is filled with half-completed props, recycled materials, 3D image scans and video equipment. 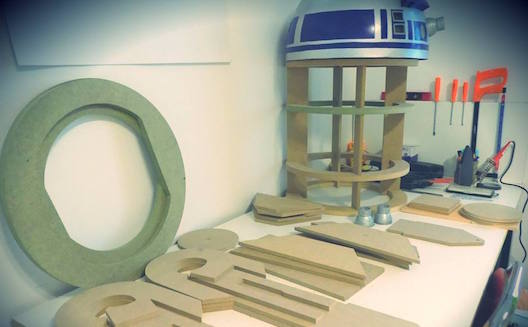 Yes, these are parts for a Star Wars set. (Image via elFablab)

In the room next door Abderraham Ameur shows off a 3D printer that they built themselves, using open-source documents and programming.

The makerspace is beginning to assist with entrepreneurial projects.

Entrepreneurs operating out of elFabLab tend to base their  projects on a technological tool. Entrepreneurs can access elFabLab’s services through a fixed price or subscription fee, depending on their needs.

“In such cases, [elFabLab] is really acting as an incubator. We offer the space, the machines, the know-how, the coaching, and the experts,” Mariem said.

Other projects follow the open-source template, where projects are orientated towards apprenticeship, knowledge-sharing and the principles of collaboration. In this case, elFabLab hosts people through a simple subscription fee, much like subscribing to a club or association.

“We are trying to juggle between the [private and open-source] formulas because we are trying to differentiate ourselves and to address a range of project holders,” Mariem explained. “We want to stay diverse, inclusive.”

A fab lab, she continued, is not simply a collection of machines. It’s a community built upon knowledge-sharing and skills transfer, a community of makers.

“There are people, for instance, who bring a USB stick with a 3D document and want to print it here. And we have to explain that we don’t work that way,” Abderraham Ameur said. “Here, you come with a project idea, and then we help you. The idea is to learn while you create.”

“It’s a bit delicate at the moment because people are not necessarily used to playing such an active role in the conception of their projects,” Mariem added. “They don’t know how to do it on their own.”

What do Mariem and Abderraham think of the new Fab Lab Solidaire? Do they feel threatened by new makerspaces?

“Not at all,” she said. “Makerspaces are different in that way. You can literally have dozens of makerspaces and they will not detract from one another. This is what we saw when we were living in Paris. They don’t compete with one another, they complement one another.”