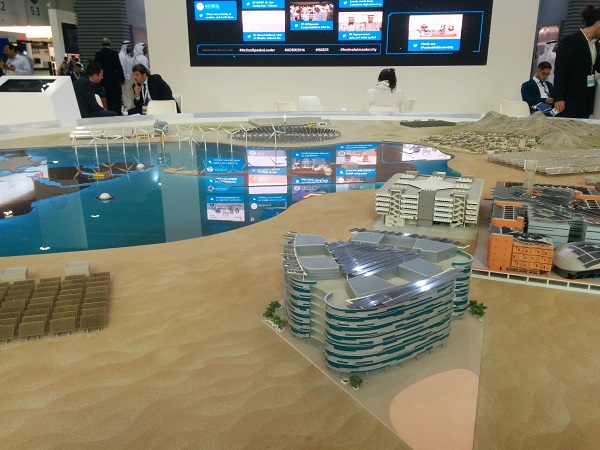 Amid a slowing global economy, multinationals both green and not competed to show off their cleantech creds at the World Future Energy Summit (WFES) last week.

Japanese nuclear corporations presented next to the world’s largest oil companies, but perhaps the most interesting businesses at the expo for Wamda readers, aside from the celebrity presence of Akon, was the range of foreign startups seeking to expand into MENA, or catch the eye of investors.

“There’s a shift to renewable energy going on here [in the Middle East]. There is very good irradiation going on by the sun, so the conditions are favorable, and people are very open to new technology,” he told Wamda.

French group Sunna Design, founded in 2010, built a reputation in Africa providing, again, off-grid solar units with batteries, this time for lighting and was using the forum to hasten a push into the Middle East.

“There are definitely more opportunities here for our company than Europe,” said Middle East business development manager Martin Saunier-Plumaz, despite quickly growing competition within the region in the off-grid solar sector. 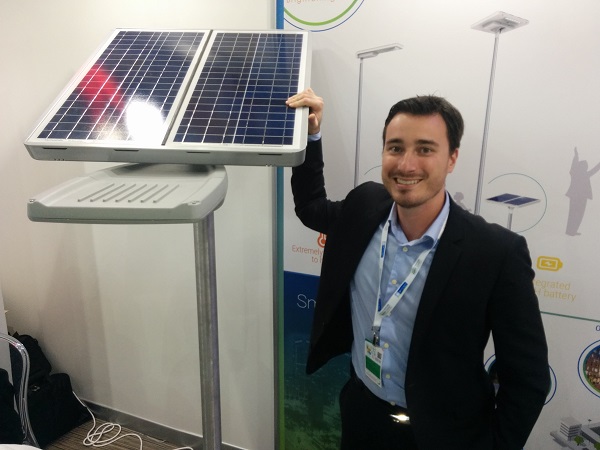 Martin Saunier-Plumaz with the Sunna Design 'solar engine' and light.

He said the nickel-metal hydride (NiMH) batteries that supported the panels could withstand temperatures of up to 85 degrees Celsius and were already being used in the Maghreb, continental Africa, Jordan, Saudi Arabia, the UAE and Oman.

Wamda readers were alerted to the possibilities of solar-plus-battery products in July last year, when CleanTech Arabia founder Ahmed Huzayyin said he was urging solar energy entrepreneurs to add battery storage options to their products.

A few, such as SolarizEgypt, are indeed competing on this front, but integrated solar battery systems are still a rare beast in this region.

Water and waste were key issues at WFES, with both sectors having their own sections at the expo. GE, a Wamda partner, released a report on water and energy use during WFES, with a case study on desalination in the Middle East to describe how the concept might apply to this region.

Three other exciting ideas from startups were from New Zealand, Germany and France again.

The pilot unit was pushed slightly past its limits in testing, or as technical manager Kevin McKay told Wamda, “we didn’t actually blow it up but…” so he was looking for investors with NZ$1 million (USD 652,000) to fix the unit and commercialize the technology. 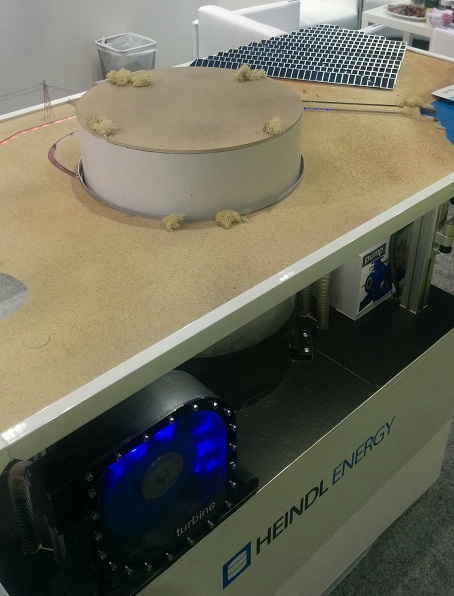 German entrepreneur Eduard Heindl was presenting an audacious idea to effectively use a mountain as a giant piston, storing energy from industrial solar farms (right).

Founded in 2013 and backed by Swiss venture capital firm HTG Ventures, the concept behind Heindl Energy is to carve a solid block of rock from the earth and use the energy generated by solar power to pump water into the cavity. At night, the rock is allowed to fall and the pressurized water is pumped into a turbine.

With a life-span of 50 to 100 years and an up-front cost of $1 billion for an 8GW plant (or the UK’s entire installed capacity of solar photovoltaic generation), it’s a bold idea that is, indeed, getting serious interest.

Heindl said overtures from the region had so far come from Saudi Arabia and the UAE, but as the prototype is due to start being built in Austria in March and a commercial project would take at least four years to build, revenue is some way away.

French startup BladeTips had possibly the most convincing renewable energy innovation however, with a new design for wind turbines.

Cofounder Thibault Cherqui said that most energy was generated by the tips of windmill blades. Their design then included only the tips of blades, held together by cables and ‘floated’ into the sky by small attached helicopter-like drones. 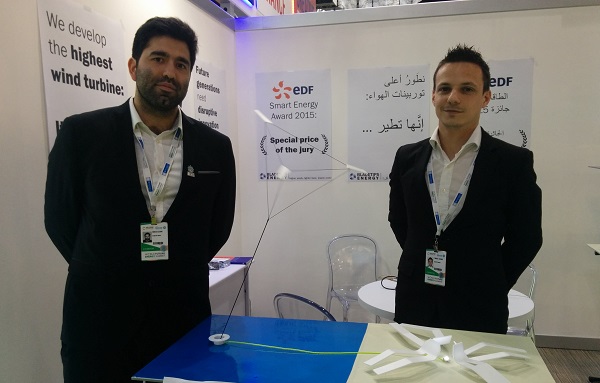 BladeTips founder Rogelio Lozano and cofounder Thibault Cherqui with a model of their design.

The ‘water-energy nexus’ concept was a hot topic, as both Wamda partner GE and the International Renewable Energy Agency (IRENA) released reports identifying key issues in the way industries and governments use and abuse water and energy resources.

The GE report included a case study on desalination in the Middle East and North Africa, as countries use oil and gas to power energy intensive desal plants to counter a worrying decline in freshwater reservoirs.

“In the United Arab Emirates, for example, desalination accounts for nearly 25 percent of total primary energy consumption. Likewise Saudi Arabia uses 25 percent of its oil and gas production to generate electricity for desalination plants,” the report said. It identified several technical and cultural solutions to using hydrocarbons for desal plants.

The IRENA report included food in its 124 page ‘nexus’ report, looking at how renewable energy could be used to achieve food and energy production and water conservation goals.

For Jordan, a state with severe water problems and a shortage of natural energy resources, this concept is particularly pertinent.  During the summit Abu Dhabi research institute Masdar announced an agreement Jordan’s Ministry of Energy and Mineral Resource to build a 200MW solar PV plant.

It will be Masdar’s second renewable project in the country, following the 117MW wind  farm in Tafila which opened in December.

The panel discussions that ran during the four-day summit were a fair representation of the reality of Middle Eastern energy demands and aspiration, as oil and gas issues also received a considerable amount of attention.

Furthermore, the summit gave over a whole day to Egypt and its efforts to resolve its energy crisis.

Investment minister Ashraf Salman claimed on Tuesday that foreign direct investment had doubled (almost entirely due to the influx of oil and gas money flooding into the country’s offshore gas fields), and panelists following him agreed that Egypt had to adjust its energy mix.

The country has legalized coal imports for several industrial uses, including cement production, is overhauling oil and gas regulations, and has opened up a market for industrial-sized renewable energy projects as well as small scale solar.