Smart car use in Egypt is not a fantasy, fuelled by visions of Google cars and Tesla Model 3s, it's a real possibility.

Ismail Zohdy is a smart mobility analyst for Booz Allen Hamilton and says Egypt’s entrepreneurs already have the tools at their disposal to make personal car use smarter, more environmentally friendly, and more socially acceptable in terms of dealing with issues such as congestion.

In an interview with Wamda, the tools he was most excited about were social media data and gamification, two elements that could be critical in changing driver behaviour.

“I’d say our future is to integrate all of these tonnes of data sources together in order to come up with the best solution,” he said. “Technology is not [the] issue at all.” 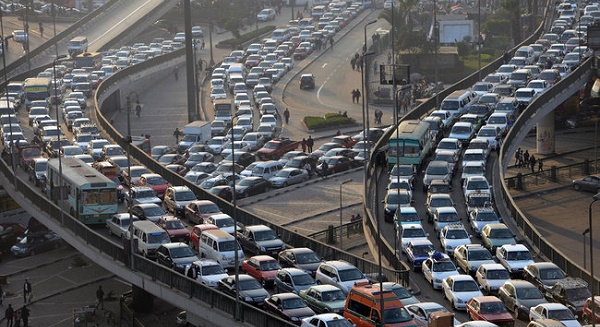 Cairo's traffic problems would be familiar to anyone who lives in a super-city - from Mumbai to Manila - and therefore applications developed there could also have global applications. (Image via AlArabiya)

In a city like Cairo, whose traffic problems are becoming legendary, these kinds of ideas are critical. In 2014, during a talk on Cairo’s urban and transportation development, renowned urban planner David Sims said he expected –if nothing changed – that by 2025 corridors would be in “complete paralysis” and new satellite cities would be “almost inaccessible except in the middle of the night”.

Already startups have, and are rising to the challenge of transportation in Egypt with car pooler Raye7, valet parker Rakna and traffic monitor Bey2ollak already establishing businesses in this sector.

But to solve Cairo’s traffic problems, more entrepreneurs with more ideas will have to enter the market, and they could do worse than listen to the advice and trends Zohdy delivers in this video.