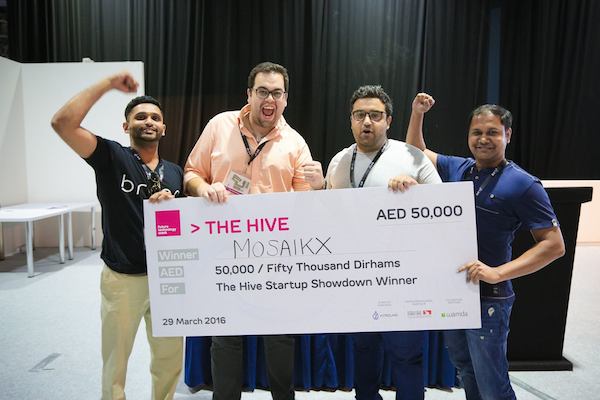 The Mosaikx team with their giant cheque. (Image via Future Technology Week)

A Dubai Chamber of Commerce and Industry study recently revealed that the IT market in the UAE alone estimated at close to 17 billion dirhams in 2015, up from 12 billion dirhams in 2010 - exactly what Future Technology Week is capitalizing on this exact opportunity said Matthew Wallhead, director of business development of exhibitions and events management at Dubai World Trade Centre (DWTC).

So, it’s big business. And at Dubai’s Future Technology Week at the end of March it was a consumer technology company, Mosaikx that were the lucky recipients of 50,000 Emirati dirhams.

Presenting Hipo - a wearable and modular smart recorder built on an artificial intelligence algorithm, it is an Internet of Things (IoT) product, enabling users to “store and organize thoughts in a fun and easy way”.

“We are one of the only IoT companies in Dubai, and this is the only IoT event in Dubai. So it’s the perfect match,” said Sina Torabi, CEO and cofounder of Mosaikx. “[The Hive] was quite different because the audience was bit more mature, they were more thinking about business [and] about how to really solve a problem.”

The Dubai-based startup was one of six finalists at The Hive on March 29. A startup competition, The Hive was part of the Innovation Zone at FTW. 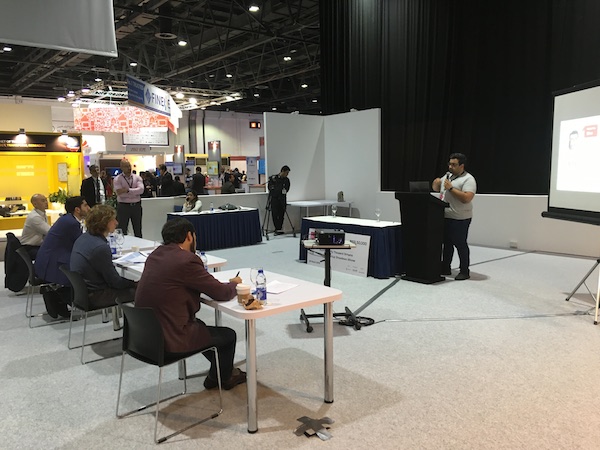 Just before the presentations, The Hive hosted a Twitter Poll talk on Business Development, a challenge that 48 percent of participate said was the biggest for startups. Astrolabs founding partner Muhammed Mekki offered concrete steps to the entrepreneurs, emphasizing that “business development is an effective way to grow your company quickly.”

Dubai-based TeachMeNow was the competition’s first runner up.

Jonny Voon, IoT lead at Innovate UK and one of the competition judges, said the presentations were of two kinds - one very polished and very focused on their business model, and the others were similar to  startup pitches, looking for direction.

“The two finalists were very focused in what they were trying to achieve,” Voon explained. “They could answer questions with with very simple, coherent, creative answers instead of having to describe their business over again.”

Along with Voon, the judges panel included Astrolabs founding partner Muhammed Mekki, Wamda’s head of business development and strategy Ibrahim Tadros, and Shaun Moore, CEO and cofounder of smart doorbell Chui. Every judge was given a scoresheet with detailed criteria including practical use of product/solution and innovative use of technology.

“Coming from a security background, it’s an understanding that hardware and software can’t be two separate things,” Voon said of the winner. “Having the security built into the hardware and having that as the key to encryption and having your voice as a way of decrypting and authorizing [function] makes a  lot of sense…The concept of usable security has to be there, and that’s what Mosaikx was doing”.

The Hive was supported by Dubai SME, Wamda and Astrolabs.