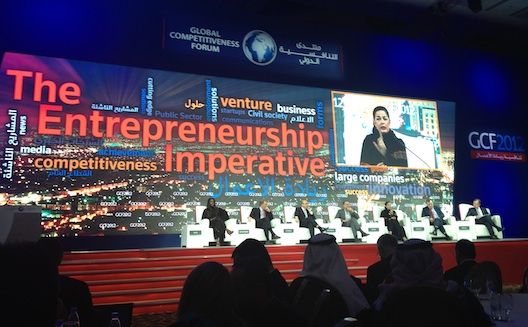 Entrepreneurship is not a luxury today, speakers seemed to say at the 6th Annual Global Competitiveness Forum last week. As global policy makers and thought leaders gathered in Riyadh from January 21st to the 24th to discuss “The Entrepreneurship Imperative,” urgency was the word of the hour.  After all, as Jim Clifton, CEO of Gallup, pointed out, “the biggest global dream at the moment is a good job.”

Specifically, three out of the seven billion people on the planet are seeking “good” employment. Unfortunately, as Clifton highlights, there are only 1.2 billion “good” jobs available around the world, leaving over 1.5 billion people unsatisfied.

Keeping with the overarching theme of the forum, the panelists and speakers who ranged from HH Turki Al Faisal of Saudi to Michael Porter of Harvard, seemed to unanimously believe that the best response to this huge gap between the demand for and supply of jobs is to tap into what Len Schlesinger of Babson called “the most powerful force of job creation known to man: entrepreneurship.”

In the Middle East, the issue is exacerbated by an oft-cited youth unemployment rate of 25%, the highest in the world. Unemployment was not the only force behind the Arab Awakening, but it certainly drove unrest and frustration. As Magatte Wade, Founder and CEO of The Tiosanno Tribe, stated, “entrepreneurs and the jobs they create are a matter of peace and war.”

Schlesinger summarized the majority view on the topic by paraphrasing the late Peter Drucker’s conclusion in 1983 that “there is all of this nonsense about entrepreneurs being born or made and it is nothing but nonsense. [Entrepreneurship] can be codified, distilled and taught.”

Other professors agreed with the Babson method of “helping create entrepreneurs,” transforming the entrepreneurship imperative into an imperative for education reform that is premised on Muhammad Yunus’ belief that on one level or another “all people are entrepreneurs, but many don't have the opportunity to find that out.” John Quelch of the China Europe International Business School emphasized “it all begins in the education system at a very early age.”

Overall, the consensus was threefold. First, entrepreneurship is a necessary life skill that needs to be taught starting at the gradeschool level. Second, the cultural stigma attached to failure needs to be overcome, as failure is the best, and in some cases,  the only way to learn; failure needs to be reframed as “intentional iteration.”

Often in this region, when we talk about reform or progress, we look outward to international best practice. There is nothing wrong with looking to the experiences of others, yet direct application of the same policies can be ineffective unless they are localized, and shown to have direct relevance to people from the region.

For example, one of the main obstacles towards curriculum reform the UAE has been the failure to use local agents as the champions of these reform efforts (more of my thoughts on that are here). Schlesinger provides support for this idea, that it’s important to place support efforts in a local context, perhaps unintentionally, when he says, “it is critical that people see the creation of their own opportunities as a viable and attainable possibility.”

It’s only logical that aspiring Arab entrepreneurs will feel more empowered when they hear the stories of other fellow entrepreneurs that have succeeded at creating their own ventures in the region. In the words of Aramex’s Fadi Ghandour, “part of our problem is that our business schools teach us case studies of Western businesses that are not directly relevant to the region, when there are clear successes from the region itself.”

Unfortunately, it is not only our business schools that look for success stories abroad before looking inwards. The next time I attend a forum on the entrepreneurship imperative in the region, I hope to hear more from Arabs themselves about the success stories and trials of the region.

And the next time I’m asked about a successful entrepreneur, I’m going to tell the story of Naif Al Qahtani, who started off as forklift driver but now runs his own multi-million dollar logistics company.