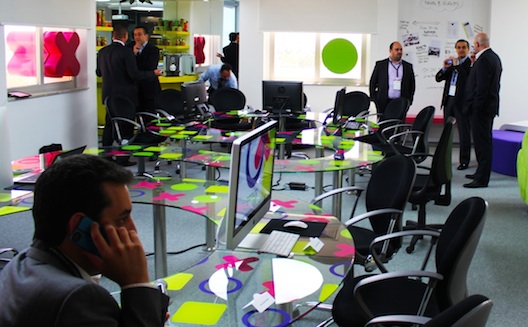 When I visited Oasis500 on my recent trip to Jordan, I had the opportunity to meet with 14 startups incubated there, for around 15-20 minutes each, gaining a quick glimpse into their ideas, passions and challenges. Overall, the issues that they are facing offered an image of the ecosystem on the whole and how it needs to evolve. The startup founders themselves, however, were optimistic on the whole, and working hard to surmount any obstacles.  Here's a snapshot of the 14 that I spoke to:

Masmoo3, an Arabic audio books company, led by CEO Ala Suleiman, who was inspired to start the company due to his reliance on English audio books and the realization that there was no way for him to listen to his favorite Arabic titles.

Curlstone Studios, a global animation studio founded in 2009 that focuses on creating “high-quality digital content” and envisions creating a new genre of anime. They are definitely on the right track with the recent release of Nashmi Man, a Jordanian superhero targeted at adults aged 18 to 25.

Doseyeh.com, a social academic network attempting to disrupt the “doseyeh” market in Jordan, revolving around the class notes and summaries that university professors sell at local bookshops and stationary stores. Led by Hamzeh Khamees, Doseyeh.com is one of many ed-tech startups that are targeting an industry in dire need of reform in the Middle East.

Gatexpress, a high-security online platform that aims to combine e-commerce with money transfers, attempting to tap into the “300 billion dollar” regional wire-transfer market. Founder and CEO Hani Saleh, less than a month into Oasis500, is taking a very lean development approach, avoiding the temptation to go back to the comfort of his previous life, and has his eyes set on the likes of Western Union.

Shawweet.com, a football social network, aims to leverage the large regional fan base of the most popular sport in the world, to create a social network where fans can interact and compete. CEO and Co-Founder Husam El-Kayyali says that although they are currently busy with the action preceding the upcoming Euro 2012, Shawweet has big plans online and on the pitch.

iTabeeb.com, an online medical reservation system, aims to solve a problem for both doctors and patients. Founder Khaled Salah says there is a huge failure in the Arab World, where patients wait for hours at doctor’s clinics while other doctors struggle to find patients. He insists it is not a problem of quality but due to a failure communication.

First Bazaar, an online retail store that makes the traditional Middle Eastern Bazaar experience accessible to users from all over the world. Founder Linda Hallaq got the idea after organizing several successful bazaars across Jordan that featured over 1000 designers and over 200,000 visitors, including Her Majesty Queen Rania of Jordan. The online platform will enable her vendors to reach a global market, and early results are very promising.

Koala, a cloud-based solution provider for business. According to Mustafa Bashaireh, one of the co-founders, Koala will focus on sales-force automation for the pharmaceuticals industry, offering solutions at a third of the current market price. The team has been working on the idea for over a year now and expects to launch very soon.

Little Thinking Minds, in business for the past 8 years, is the “Baby Einstein” of the Middle East, focused on creating educational material for children and toddlers. Rama Kayyali Jardaneh, Creative Director and Co-Founder, says that her team joined Oasis500 after deciding to take Little Thinking Minds up a level, from producing one video a year to three or four. Seeing what they have done already with the limited resources at their disposal, I think we can expect even more after Oasis500.

Galleryalsharq.com, a portal and hub for oriental media services currently focused on oriental stock photos. While working for 13 years as a creative director, CEO Riham Mahafzah had difficulty finding high quality, unique oriental digital content.  Having bypassed the upfront costs of hiring photographers via smart arrangements that ensured a win-win situation, Riham plans to expand to other media soon.

Aleef Express, an online pet store and mobile pet service company focused on Jordan, with goals to expand to the Gulf very soon. All of the entrepreneurs I met were deeply passionate about their company, but CEO Sufian Horani seemed to stand out. Having found Amman’s version of the “dog whisperer,” Sufian and his team are set on changing the experience of all pet owners in Jordan, starting with a successful photocompetition they held last month.

Roznamti.com, an online social calendar that syncs everything in your life from Facebook events to the timings of Turkish soap operas and Game of Thrones. CEO Watheq Saffarini and his team are working hard to make sure nobody in Amman has to miss a Real Madrid – Barcelona match due to family commitments, ever again.

Zaytouneh.com, the first Arabic portal dedicated to video recipes. Gone are the days of reading food recipes from a cook book. With a background in video production  and inspired by her own difficulties in the kitchen, CEO Fida Taher, and her team are getting into every kitchen in Amman, and soon across the Arab world and the U.S.

I3zif.com, an online music center that teaches users how to play various musical instruments via Arabic video lessons. Founder Bisher Abu Taleb's passion for music and the difficulties his friends faced with learning music at traditional music centers inspired the idea. In addition to the Arab world, i3zef hopes to appeal to a global audience by offering unique online lessons for oriental instruments, rarely found outside the Arab world.