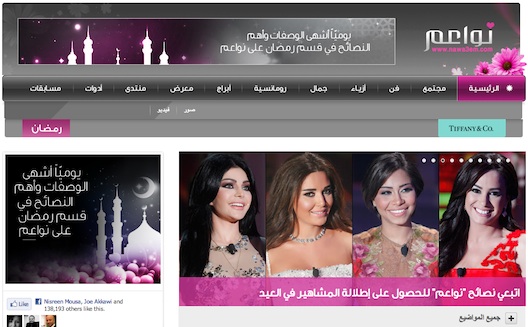 There’s no shortage of demand for Arabic content online today, but building a niche site that will captivate and consistently entertain a large audience takes focus and hard work. Yet Dubai-based branding company 2Pure has made it look easy, gaining over one million unique visitors on women’s content platform nawa3em.com and around 700K on business and lifestyle website ra2ed.com, within a year of their founding. Not everyone can break records for online content, but a look at 2Pure’s recipe reveals tactics that could help others succeed.

Firstly, the co-founders of the Dubai-based e-publishing platform, Zoya Sakr and Rudolf Jabre, decided to target very specific markets. Sakr established nawa3em.com in 2011 to focus exclusively on women in the region, joining sites like Supermama, which focuses on mothers and family, and paving the way for online concepts like Mjalati, which launched in June 2011. Jabre then launched ra2ed.com in February 2012 as a fully Arabic-language business and lifestyle website. While the prior lack of relevant, accessible Arabic digital content has been widely discussed, Sakr and Jabre helped make that fact a relic of the past by working around the clock to generate exclusive content for readers.

Secondly, Sakr and Jabre also spent a significant amount of time studying their audience, examining metrics such as the most popular keywords that Arab women in the MENA region use to search content. “We try to understand our target audience more than [we understand] ourselves,” jokes Jabre.

Most importantly, the personalization of content online isn’t just about feeding users the content you believe they want, he says. It is about also letting them curate the content you produce, and in many cases generating the content themselves. To tap into this customer want, 2Pure e-publishing leverages its social media fanbase to create content and help it customize original content, for example, using twitter to solicit questions for celebrity interviews.

“Nawa3em.com has grown into a unique space for women that bridges original content (OC) and user generated content (UGC); our readers are not simply consuming premium content, but also producing it,” says founder Sakr. The interplay between UGC and OC allows online portals is to go beyond producing content and to make the portal about building a loyal community.

Thirdly and perhaps most importantly, Sakr and Jabre emphasize that contrary to the belief of most new entrants in the market, building a successful online portal is not an easy, low cost endeavor. The duo emphasize that their idea was challenging and difficult to implement, and their complete commitment and belief in the idea were crucial for its success. While a certain colleague in the print industry manages around 30 titles with only 35 full-time employees, Jabre says, 2Pure e-publishing uses 60 fulltime staff to manage their three publications, so that they have the bandwidth to execute their vision in detail.

Yet even scaling and engaging the community aren’t enough to stay current; a content portal has to stay focused on the trends of user consumption. Wisely, Sakr and Jabre are keeping two major trends in mind- the power of youth and mobile platforms. They plan on releasing a youth-oriented portal in the last quarter of 2012, and in 2013, fans should expect penetration to other mediums, especially mobile, says Jabre, as “we believe the future lies in mobile phones.”