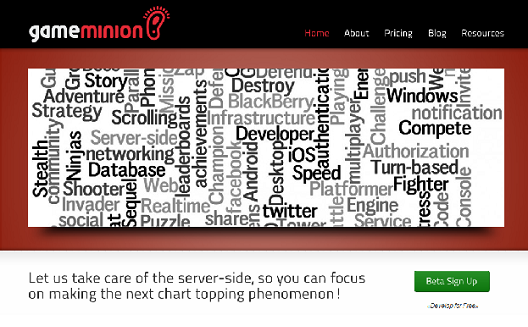 Now, Brothers Mohamed Hamedi and Ali Hamidi have launched Game Minion to level the playing field,  pooling all of the tools, software, and add-ons need to craft a mobile game onto one platform that grants indie developers the same capabilities as a large app development house.

Originally from Libya, the brothers grew up in London where they were inspired by a boom in independent game development in the 80s and early 90s. In London, Hamedi noticed that fresh, inspired indie developers were quickly outpaced and absorbed by a few big publishing houses that could afford greater resources and better technologies.

“Now what we’ve seen is a resurgence of indie developers, especially in the mobile space.... we asked ourselves, what would be our part in that space?” Hamedi explains. Game Minion is built to support those indie games, who today face a demanding mobile gaming consumer who expects better graphics, interactive leaderboards, and an overall higher quality of game.

As a serial entrepreneur, Hamedi has worked in the tech startup space for several years, finally finding his passion in championing indie developers.

There are a few good tools and portals in the market today for independent developers, but none focus solely on mobile gaming apps, Hamedi reveals. Often developers focusing on mobile games will need to tap into several services just to achieve a certain level of feature parity with the big publishers. Game Minion is attempting to end this disjointed process by housing all of the necessary tools but only charging developers for the resources they use.

When designing “freemium” (free-to-play) games, which are rising in popularity today relative to $0.99 games, developers have to make their game available on both Android and iOS and must cast a wide net to make any sort of profit. Game Minion makes this conversion simpler by offering services that facilitate platform adaptation for the developer.

“Imagine you are an indie developer and you have to code the game, manage the servers, monitor security, achieve scalability,” Hamedi points out, “We really tried to come up with something that encompasses everything.”

The key to Game Minion’s strategy is not to cobrand with users, or to take credit for the games created with their service. “We want to be in the background; we want to push the developer to be in the forefront,” Hamedi explains, “They own the game, they own their brand.”

Though it is unique in the space, Game Minion does compete with other piecemeal services and point products as well as large publishing houses that have their own in-house facilities.

Examples include Flurry, which handles game analytics, and Urban Airship, which powers push notifications and mobile subscriptions. It's up to the developer to determine which game building products work best for them, but uniquely, Game Minion aims to offer several products and take care of the integration, helping developers to incorporate these services.

GameTako, another platform for indie developers, focuses on game distribution and workshop training for mobile game developers. GameTako hosts challenges and events for developers to quickly create and launch their games. While they won’t directly compete, both startups have an eye on empowering indie mobile game development.

Gearing Up for Global Gaming

Game Minion is currently in closed beta, hoping to open for other developers to try their services by early November. Thus far, it's seen 190 registered users from Argentina to Korea, with over 50% based in the US, some in the UK, and the rest split between Latin America and Asia. Around 15% of users come from MENA.

During closed beta, Game Minion’s services are free until developers are ready to publish. One original game has already been completed and will be released later this year. Peek, a unique photo-sharing and guessing game, uses a sophisticated gaming model on par with some of the biggest names in mobile gaming to date.

It will be good to see indie developers get back in the game now that a service like Game Minion is working to level out the playing field. A true breakthrough in the market will take some time, but Game Minion has a vision to enable aspiring developers to build that next powerhouse game that will enchant not only the region, but the world.