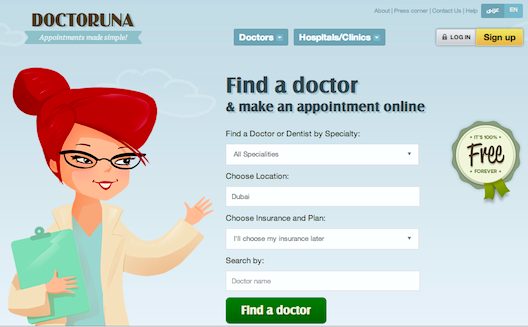 I vividly remember the first time I fell sick when I moved away for college. It was just a seasonal cold, but it felt like death, compounded with mounds of snow outside my window and polar temperatures – a recipe for disaster. Not only did I have to walk to the doctor’s office and to the pharmacy to get the meds that would make it all go away, I first had to find a doctor that I didn’t have to wait four months for. Needless to say, a service like DoctorUna could have really come in handy.

DoctorUna, a venture born and bred in Dubai, allows patients to quickly search for doctors, compare them, and book an appointment – all from the comfort of their screens.

CEO Yaasen Dalal says he received mixed reactions when he first thought up the idea, but the response only six months after setting up has encouraged him to expand – and how. “Some people said it was a crazy idea, and some people thought it was the best thing since sliced bread,” says Dalal. “I mean, you’re probably not going to be looking for a brain surgeon on Google or on our site, but we’re seeing many doctors’ clinics and large polyclinics signing up to our service. The response has been overwhelmingly positive, with doctors and clinic owners saying this is something that will transform their ability to connect with their patients, both existing and new.”

With plans to roll out across all major Middle Eastern cities by September 2013, Dalal’s aim is to make the process more streamlined for both patients, and their physicians. “Doctors spend a lot of time studying and learning to give care, so they’re not in the business of marketing and schedule management. They end up suffering from no-shows and last minute cancellations,” explains Dalal. “We sit in the middle, between them and patients. We give clear information and help them search by location, gender, education, and experience. We allow patients to make informed and empowered choices, and to try to get better sooner.”

Over 200 doctors and clinics have signed up on DoctorUna so far, and Dalal says hundreds more are in the pipeline over the next couple of months. In Dubai, where the service is fully rolled out, doctors are charged an AED 6500 (US $1770) annual fee to list with DoctorUna, and Dalal says the service will always be free for patients. “We will never have advertising on the site – we are not that kind of website,” he stresses.

While the opportunities in the healthcare sector are interesting for entrepreneurs like Dalal, they also come with great risk and responsibilities. Dalal claims a lack of competition in the region. “Some sites appear to have shut down because they were listing unlicensed doctors,” he explains. “We are incredibly rigorous in terms of making sure everyone on our site is licensed and professional.”

As it scales, however, the site will likely come into competition with local sites like Ekshef, a web platform that allows potential patients to book appointments online with doctors in Egypt, and web portals like Palestine's WebTeb and Jordan’s Altibbi, which allow users to connect with doctors.

The biggest challenge for DoctorUna will be working on the ground to secure the best doctors possible, perhaps maintaining a feedback system so that patients can see doctors ranked by public opinion. In any new market, they will be at a disadvantage relative to local players. But if they can succeed to enter new markets first or partner with other local sites like Ekshef, they might be able to own the space regionally.