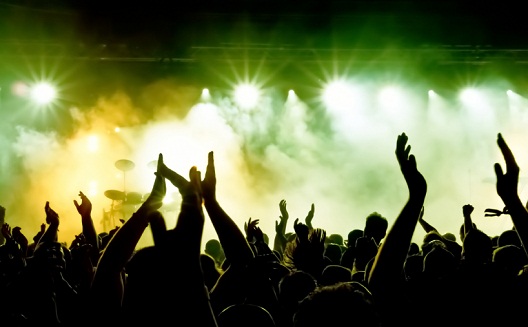 This post is the first in a new content series called Wamda Debates. Every other week, the Wamda team debates a topic, industry, or challenge in the Arab world to identify trends, solutions, and remaining gaps and brainstorm ways to address them.

Our first Wamda debate focused on the music industry in the Arab world. We discussed how the evolution of publishing mediums, from vinyl to cassette and CD to mp3, has affected monetization, and then turned our attention to the latest transformation disrupting the industry: music is turning from a product into a service.

Back in 1999, the advent of Napster kicked off this revolution by introducing an entirely new way to share and receive music. Though illegal, its peer-to-peer network allowed buyers to bypass traditional distribution channels (i.e. purchasing CDs from record labels). In response, Metallica sued Napster the following year for sharing an unreleased song recording.

The rise of platforms like Napster, and a continued lack of legal alternatives, made piracy the easiest way for listeners to find and share music online, but left the music industry fuming. The biggest opponent to platforms like Napster was actually the film industry, afraid to lose the integrity of their distribution as well.

To combat piracy and illegal song-sharing platforms, more recent companies like Pandora, Rdio, and most importantly Spotify (whose board of directors now includes Sean Parker, who initially co-founded Napster) have expanded to fill the gap of legal online song streaming. Coming full circle, Metallica recently decided to bury the hatchet with Parker and put their album on Spotify- a sign of the industry's swift transformation.

Spotify has direct agreements with record labels, digital distributors, and aggregators to whom they pay royalties (which eats up nearly 70% of revenues); these distributors then pay their recording artists and songwriters according to their specific contracts.

By offering a service that is relatively inexpensive and easier to use than pirate sites, Spotify is able to maintain its hegemony in the streaming market and attract new customers willing to try limited streaming for free (thanks to ads) or premium unlimited streaming for $10 per month, despite the fact that pirated tracks are often free.

How do you consume music?

One of the most interesting parts of the discussion for me was to see how others get their music. At Wamda, perhaps by virtue of being an international team, we each have very different ways of discovering, streaming, and collecting music. Some of us use platforms like Anghami, SoundCloud, and Grooveshark to listen to and find new music. Others, unsatisfied with the discovery capabilities of these platforms, use online radio sites like Last.fm, Soundtracker.fm, and in-region portal Musicalism.fm to discover new artists.

To consume music, some of us use iTunes to purchase singles or albums, while others only rely on streaming or borrowing music from our friends. There are clearly many ways to discover and consume music, even among a small team.

All of us agreed, however, that a platform should have a good discovery tool or recommendation system to help you learn about and try new artists- the online version of the knowledgeable record store guy, if you will. Yet this crucial element often leaves something to be desired on current platforms.

The biggest challenge that the industry is still grappling with is clearly how and when to monetize. What type of freemium model do you use, how do you manage subscriptions, and how do you push users to move from a free to a paid service? Pandora, for example, has had consistent trouble monetizing and thus attracting investors.

Mobile is becoming a big part of the answer. Our Community Manager Stephanie put it simply, “Music has to be mobile.” Listeners today rely on their phones for music consumption, plugging in to their iPhone or Android on their commute, or while working, to listen to their playlists.

Anghami is banking on this being true throughout the Arab world, as they only offer streaming via mobile device, perhaps partly to prevent users from ripping songs from an online portal. But many users still like to listen to and organize their music library on their computer before uploading to a mobile device; the platform may want to launch on the web at some point.

A major theme of the discussion was also that there is no way for people to actually express their identity through music online. More than just an aggregator of favorite tracks for users, such a platform would allow users to express their moods, songs they're currently listening to, recent live shows, favorite albums- the options are myriad. It would also be a great platform for collecting big data samples and explaining some elements of human decisions and market behavior.

As the internet and social networks bring users closer and closer together, harnessing the big data around music consumption could be an enormous asset for the industry and other stakeholders. Potential users of such a platform may even be excited to express and share their music identity online to build a following for their taste in music. Beyond that, perhaps someone will come up with a way to “blend between real life and music,” as Wamda’s CEO Habib Haddad suggested. Such an endeavor could combine your lifestyle, activities, and musical tastes together to create an online identity and then explain how your musical tastes define your life experience and attitude.

The closest options for sharing your music taste today might be sharing music on Facebook via platforms like SoundCloud and Spotify, or opening an account on the new MySpace. But music news and expression inevitably gets lost in users' News Feed, and data might not be particularly useful if songs are shared only occasionally. One U.S. company, The Echo Nest, is beginning to take on the challenge of building such a platform, and we'll be watching its progress.

As we looked towards the long term, we asked the questions of what would happen if a global streaming service entered the Middle East, and what it would take for platforms like Anghami and Yala Music to dominate the local market. Successfully monetizing across the region is still a large hurdle these platforms must overcome if they are to continue to compete and face off against international competitors should the likes of Spotify begin to eye the region.

As we debated the viability of the streaming model in general, we all agreed that there is still a lot of room for innovation in the industry by further democratizing music discovery and successfully monetizing a streaming platform while keeping it more attractive than illegal downloading.

Will music truly become simply a service rather than a product that you own? Let us know your thoughts on these topics in the comments section below.