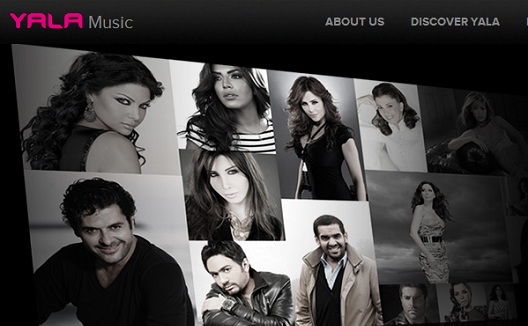 Mobile application Anghami has received a lot of buzz since it launched its music streaming service this November, leaping to the top of iOS app lists in 12 Arab countries.

It's a new revenue model for Yala Music, which launched in 2010 to offer music fans the ability to stream and download over 100,000 tracks from 5,000 artists. With its headquarters in France, and offices in Morocco, Egypt, Lebanon, and the UAE, Yala, one of the first music streaming platforms in the region, has reached 1 million downloads.

Their first ad sponsor, Pepsi, should help the platform monetize as it works to recover from a traffic slump in 2012.

Whether browsing on web or mobile, global users will watch a 20 second ad video before downloading any song in Yala's database for free. Yala Music offers applications for iOS, Android, Samsung, Nokia, Blackberry and Windows, and a desktop version currently only available for Windows.

This ad revenue model stands in contrast to Anghami, which currently offers unlimited online and offline streaming via its mobile app for free. In March, a paywall will go up, allowing users unlimited streaming of over 1 million tracks for $5 a month, while a free option while continue to offer a limited number of hours. In countries like Jordan, the premium service will be free for Orange subscribers, a model Anghami intends to scale across the region.

It will be interesting to see whether advertising or a subscription model appeals more to customers in the region; the question of how to best monetize streaming platforms is still looming in the local music industry.

Yala founder Patrick Chassany insists that here Yala's model is more amenable to the local market. "Anghami is a new competitor. Their model is trying to replicate an existing model, similar to Western music services, in a region that has specific needs and particular music consumption habits."

Anghami co-founder Elie Habib counters that "We do not believe in a model whereby a user is forced through an ad to get the music, nor in a scalable advertising subsidization - this is why Anghami is launching with several mobile operators reducing the cost to the user."

Neither model is exactly unique to the Arab world. The success of either platform will also depend upon their catalogues and securing rights to the region’s largest music labels and distributors. While Anghami recently secured exclusive streaming contracts with Rotana in Lebanon, the UAE and Saudi Arabia, Yala Music also has a worldwide distribution contract with Rotana. Anghami offers international music as well, though Yala Music is just behind them, currently in talks to begin offering popular international tracks and artists in the next few months.

A strong music discovery tool, through recommendations, will also be a critical element for luring users to either platform.

The regional race for market supremacy could also be complicated should another international platform like Sweden-based Spotify, France's Deezer, or Swedish-built Rdio choose to throw their hat into the ring (we hear Deezer is entering the market- more on that soon). For now, we’ll have to wait to see how consumers react.