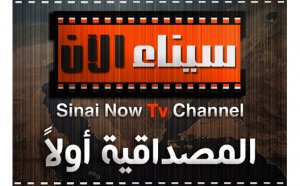 Apart from popular narratives about weapons, terrorism, smuggling, tunnels, the desert and the Bedouin life, what do you really know about regular life in Sinai lately?

Sinai Now is the first internet TV channel to broadcast live from Sinai starting the New Year, offering five weekly programs of 10 to 15 minutes each, designed to introduce the Sinai peninsula and its society to Egyptian citizens at large.

The project is part of a bigger institution, Sinai Media Production, that seeks to become Sinai’s number one media network, with a TV channel, a news website for investigative reports and social stories, and perhaps, later on, a dedicated radio station.

A View into the Sinai

Sinai Now was launched by Ayman Mohsen, a young reporter and documentary filmmaker who studied media and journalism at Sinai University. After graduating in 2010, he began working in media and now works as the office manager for a private Egyptian daily newspaper. The problem he decided to tackle is simple, he explains. "Local media largely lacks credibility when it comes to covering events in Sinai, because it focuses on the negative aspects, thus molding an exaggerated image of the Sinai and its people."

Following the Egyptian revolution in 2011, Mohsen decided to launch his local network from Sinai in order to reveal the ordinary lives of Sinai citizens to a global audience. His team of around fifteen reporters and activists designed a series of programs that include “Huna Sinaa” (Here is Sinai), which tells the story of the Sinai's history, “Sinai, man and heritage," which reveals the Sinai society’s customs and traditions, and “KalaSinkov," which tackles politics in the peninsula, while “Tokh fil Khroo” is a sarcastic comedy program, just as the title suggests – a Sinai proverb meaning “Gibberish.” Last but not least, “Muslim... But” discusses moderate Islam.

Normally, commercial companies takes only a day to be officially listed in the commercial register – or so is the case in Cairo. In the Sinai, Egypt's most remote corner, the registration process can take as long as four months.

Despite its focused subject matter, Sinai Now is not targeting the local population, for whom internet is not often the primary mode of consuming news. Mohsen says he plans an English website and wishes to “broadcast Sinai to the world,” showcasing its language, heritage and fashion.

When it comes to funding, the team is currently financing the project out of pocket, leveraging the founders' investment and in-kind contributions from the team, mostly in the form of high-end HD cameras used for filming reports and programs. The team has also set up its own recording studio.

Their main expenses beyond startup costs now mostly include travel and transportation in North and Central Sinai. These expenses will expand as they grow to include south Sinai, extending the project’s geographic coverage to nearly 61,000 square kilometers, but the team is continuing to plan expansion as they roll out a new revenue stream in advertising.

The entire team works on a volunteer basis for now, but Mohsen expects the project to attract local advertising revenue. Mohsen is also taking a long-term view, hoping to have "Sinai Now" support local sustainability by promoting local products, as he also works to make the site profitable. “We need to build small projects and help Sinai products, such as olive oil, clementines or Sinai clothing, reach all corners of Egypt and even foreign markets." he says. "This will help create jobs for Sinai youth," who are often without steady income streams and heavily dependent upon tourism.

This approach to supporting the community may mean that Sinai Now deviates from a traditional media role, becoming one of a new brand of experimental media outlets in the Middle East- Syria Deeply, which aims to cover the conflict in Syria in context- is another. But perhaps in the Sinai at least, no local media will be able to preserve complete independence as long as it creates new ways for generating profit in Egypt's most isolated corner.