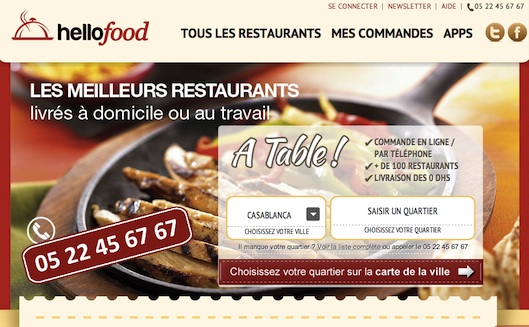 HelloFood, which first launched in Nigeria and Morocco (at HelloFood.ma) in early November 2012, is part of Rocket's broader FoodPanda brand, which launched in Singapore around March 2012, and quickly expanded to Indonesia and India. FoodPanda now covers 27 countries, operating under the names Foodalia, Foodnation, HungryPanda and Pidiendo, and HelloFood, which also now operates in Ivory Coast, Ghana, Kenya, and Senegal.

HelloFood is also Rocket's second entrance into Morocco, after launching Jumia, a local version of Amazon, around June 2012.

Hellofood now lists delivery restaurants in Casablanca and Rabat, and allows clients to order directly from the website, or over the phone, offering cash on delivery (COD) as payment. Their primary competition is LaCartePlz.ma, which was launched by six young Moroccan entrepreneurs this past summer to serve Rabat and soon Casablanca. LaCartePlz currently appears to have less traffic than HelloFood, according to Alexa, and clearly doesn't have the same budget as a Rocket company, but has earned a lot of respect in the startup community for being an innovative local service.

Mixing an Online and Offline Experience

The downside of this process is that you can only order when the customer service is open, i.e. from 11am to midnight on weekdays, from 11am to 11pm on Saturdays, and from 11am to 22pm on Sundays.

This phone process is part of HelloFood’s quality strategy, Jabrane explains. Yet it’s an interesting choice when you know that similar services have implemented cheaper automated processes. In Oman for instance, Clickformeal has opted for a device network system. The restaurant owners don’t even need a computer or internet connection, but can receive orders through a simple device that allows them to confirm or decline on the spot.

The HelloFood team in Morocco also won't hesitate to ban a restaurant that's not up to their standards. Those that remain are offered  consulting on their online and offline marketing, their social media strategy, opportunities to integrate with HelloFood’s offline and local marketing campaigns, and user feedback, all of which are sold as packages.

Expanding Across the Arab World

In Casablanca and Rabat, HelloFood company is already listing 100 restaurants, with the assurance that more, especially chains like  Luigi or Lina’s, will be added soon. In the meantime, in a classic Rocket Style, HelloFood appears to be expanding as quickly as it can. Other cities in Morocco are under consideration, according to Jabrane.

Wamda initially heard rumors that the online delivery company would be launching in Lebanon. Later we heard that the company was eying Tunisia, Algeria and Lebanon. But launching first in Saudi Arabia, the region's largest market, makes sense. It's also the site's first Arabic interface, as its Moroccan version is in French.

Saudi is likely a good bet. Although HelloFood will compete with Egyptian company Otlob and Kuwait's Talabat, neither appears to dominate the market.

If HelloFood heads for the UAE, one of the region's most voracious markets for delivery, where a health expatriate culture is already accustomed to ordering online, it will compete with FoodonClick, the Arab world version of Yemeksepti, a Turkish giant that recently raised $44 million from General Atlantic and is now tackling the Middle East.

Should FoodonClick enter the Saudi market, which it undoubtedly will, the games win begin. All three likely have large marketing budgets; can Rocket's pockets outlast the other two?

It remains to be seen. Currently, HelloFood appears to have a fraction of Otlob's traffic in Saudi Arabia. Yet Rocket is likely quickly planning its next move. If HelloFood expands into Lebanon, it will find a very untapped but hungry market for online ordering. In Jordan, it will have to compete with iFood and a slew of other sites, none of which likely have its budget. If Jeeran goes into the online ordering space, that could be its biggest contender.