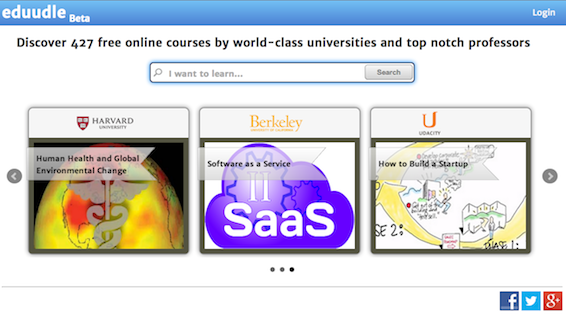 Bassem Fayek is a man on a mission to "make MOOCs more popular.” A former consultant in the process of getting his MBA, Fayek launched Eduudle (beta) to be a “Trip-Advisor meets Spotify” for Massive Open Online Courses, also known as MOOCs.

For anyone looking to find a new MOOC, Eduddle currently offers searchable listings of free online courses offered by Stanford, MIT, Harvard, UC Berkeley, Harvard and over 70 other world-class universities. Descriptions of each course detail the topic and format, and reveal user reviews. Users can pick and choose and save their favorite courses to a "Course Wall," which essentially works like a MOOC playlist; they can then head to the official site of each MOOC to actually take the course.

Fayek, who is based in Cairo, first got the idea for the platform last November, when he first tried to search for the right course for learning how to develop on iOS. He quickly realized that there wasn’t a popular website that ranked the various courses he found or gave comparative feedback.

Once he decided to launch the site, Fayek faced his first (not uncommon) challenge: he didn’t have a technical background, and it’s difficult to recruit an experienced technical co-founder (an issue discussed heavily on Quora,).  However, Fayek was intent on not completely outsourcing the development of his product – “a mistake several entrepreneurs in the Arab world fall into” –  so he set out to find a technical co-founder.

Through a mutual friend, Fayek finally managed to meet one with the technical breadth and knowledge he needed, who also shared his passion for education technology. However, he quickly realized that convincing somebody with a comfortable job and significant technical experience to join a startup is also hard work! He had to demonstrate value and commitment and do so quickly if he was going to convince Zaid Marji, who he describes as “a tech guru with 10 years of experience in search, big data, and web development,” to join his venture.

To launch his startup, Fayek began using the very product he was hoping to promote: MOOCs. After completing a Udemy course on rapid prototyping and a Coursera course on Human Computer Interface, he flew to London to participate in an education-focused Startup Weekend. With no technical support, and a bias towards “presenting results, not an idea,” his single person team won second runner-up.

He then turned his demo into what he called a “Minimum Viable Pitch,” a 10-slide presentation and a website mockup, and spent the rest of his time in London “pitching to VCs to get advice rather than raise money.”  He did the same in San Francisco and Cairo and was able to quickly tap into some valuable feedback. With this approach, Fayek realized that it was much easier to access the knowledge of experienced investors than if he were actually seeking funding, a lesson he believes more “entrepreneurs in the region should take note of.”

With the feedback he received, Fayek brought on board Mostafa Menessy and Ibrahim Gharabawi, two self-taught developers from his Alma mater, AUC, to help build the first prototype. Fayek then applied to MIT’s Arab Startup Competition and made it all the way to the final round in Doha this April, with an idea that was only five months old.

Although Eduudle didn’t win any prizes at the end of the competition, Fayek had finally managed to convince Marji and the rest of the team that the startup had potential. He explains, “the toughest part about startups is building a winning team. If I’m up to building a Cairo-based one billion dollar company, I better be headhunting the best talent in the region – people who share the same passion and are better than me at what they do.”

From the 427 courses they currently list, the team’s objective right now is to increase the number of courses to over than 1,000. This month, they’ve just made it to the top three finalists at the London Business School Startup Competition. It’s too early to tell if Eduudle will be a success, but if any of this hype about MOOCs is true, Fayek and Marji might just be on to something.