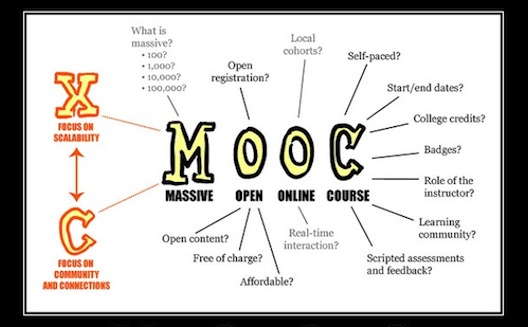 One of the hallmarks of an established education system is its glacial pace of change. For all of the recent advances in technology, we still deliver education in pretty much the same way- one of the few structures that still hasn’t changed since the early 1900s is that of a classroom or lecture hall.

But with the rise of Massive Open Online Courses (MOOCs, pronounced “mooks”), everything could change.  Last year was dubbed the year of the MOOC, with the technology that enables the courses called the most important education technology in 200 years. Even Clayton Christensen, the father of disruptive innovation, has given a nod to its disruptive potential.

If you are like many busy entrepreneurs in the Middle East, you might be wondering what exactly a MOOC is and what all the hype is about. Massive Open Online Courses are classes that are offered to a large number of students, over the internet, for free. In a typical MOOC, students watch short video lectures online and complete assignments that are graded either by machines or by their peers. This format allows a single professor to teach a class of several thousand students in a personalized fashion.

Online education is of course not a new phenomenon. In fact, distance education through correspondence has been around as early as 1873. The University of Phoenix offered its first online degree back in 1989, and MOOCs themselves first emerged in 2008.

The recent MOOC hype is due to the fact that elite American universities have embraced them and are “driving the charge”. It’s not the first time these institutions have brought their content online; the Massachusetts Institute of Technology (MIT) launched “MIT OpenCourseWare” in October 2002. However; unlike MOOCs, these courses were not interactive and didn’t offer live assignments or ways for students to demonstrate their knowledge.

MOOCs are now seen to represent the first real opportunity for democratizing higher education, as they offer courses from the best institutions to everyone around the world, for the cost of an Internet connection – creating “Harvard grads” all the way from couches in Abu Dhabi.

Who are the Major MOOCs?

There are three key players in the MOOC arena as of May 2013, all of which are based in the United States. They are Udacity, Coursera, and edX.

Udacity was the first. It works directly with professors rather than institutions. Coursera, which signs contracts directly with colleges, is now the largest, with over 330 courses in five different languages from 62 partner universities. Both Udacity and Coursera are for-profit.

EdX, on the other hand, is a not-for-profit joint venture between Harvard and MIT that also partners with universities. Notably, edX will open-source its code at the beginning of the next month, so that anybody can build their own platform using its courses.

Like any innovation, MOOCs also have their opponents. Some elite schools have flat out rejected the concept in its current form, as there are serious concerns and unanswered questions about the quality of learning that takes places in a MOOC (it perpetuates the “information dispensing model of teaching” and a lack of “real” social interaction, some say).

Others are concerned about the credentials it offers (the overwhelming majority of MOOCs are not for credit) and the model’s sustainability (how will the MOOC providers make money on free courses?) and high dropout rates (reaching 95% in some cases). However, none of these concerns are serious enough to create a sizeable dent in the traction MOOCs are experiencing, and these questions are being addressed as it evolves.

The Opportunity in the Middle East

Keeping in mind the significant language barrier (no provider has any courses in Arabic yet), MOOCs present a great opportunity for regional entrepreneurs on two counts.

First, several courses on entrepreneurship and related fields have already been developed, the most prominent of which is Steve Blank’s “How to Build A Startup”. Udacity. Coursera and edX also offer several classes on technology and entrepreneurship that will be helpful to regional entrepreneurs.

Second, MOOCs present a great business opportunity for regional entrepreneurs, like Eduudle’s Bassem Fayek from Egypt (now SkillAcademy), that are willing to experiment with different business models and capitalize on what appears to be the beginning of a new industry.

MOOCs will most likely not be the silver bullet that “fixes” higher education – if there will ever be a silver bullet in education (or any sector). However, with no Arab university ranked in the top 100 universities worldwide, and employers complaining about a serious skills gap, MOOCs have the potential to be part of an affordable solution that brings better quality higher education to the Arab world.

In the words of Prof. Mohammed Qayoumi, President of San Jose State University – one of the universities taking the charge on MOOC adoption in the US, “MOOCs can have even more of an impact in emerging economies given their relatively large youth populations.”