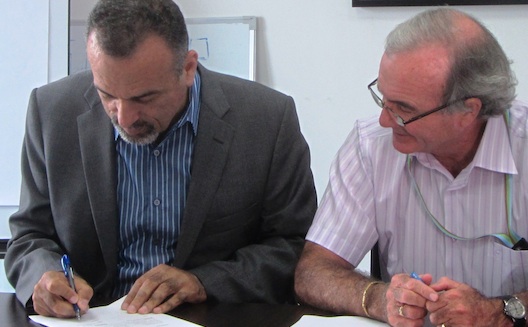 The startup scene in Palestine has been slow to build over the past few years, led by initiatives like Bazinga and grassroots organization Peeks. This past year, however, support has flooded into both the West Bank and Gaza, with the start of Hi-Tech Hub, a tech talk series based on Amman Tech Tuesdays, the resurgence of Gaza’s first incubator, BTI,  and the recent launch of Fast Forward, Palestine’s first accelerator, and Gaza Sky Geeks, a high-tech accelerator supported by Mercy Corps.

The gulf between startups coming out of incubators and accelerators, and those securing Series A funding is wide. Yet a new initiative hopes to close the gap.

Arabreneur will support startups that have passed the incubation stage and are ready to go to market with a product. The startups can come from any incubator in the Palestinian Territories, such as Fast Forward or PICTI.

To support startups coming out of Fast Forward and PICTI’s incubator, the initiative offer a local co-working space and a sector-agnostic seed fund and angel network, that will invest an average of $50,000 to $100,000. In its first year, Arabreneur plans to invest in around 10 startups, supporting their growth with mentorship and working spaces in Palestine, Jordan and Dubai. The goal is to create at least 50-100 new local jobs in Palestine.

“When we studied the Palestinian market, we saw a gap in angel and seed funding,” says Mustafa Deeb, the ICT sector lead at USAID’s Compete Project. “While we have Sadara Ventures, Siraj Capital, and Aureos Capital investing at the VC stage, these venture capitalists are not finding enough supply in terms of a pipeline of startups. What we wanted to do is create an entity that is fully managed by investors, that will select and filter startups, and support them to scale beyond their initial incubation.”

Arabreneur is founded and led by Abdul Malek Jaber, the founder of MENA Apps, an Amman-based initiative that supports Arab web and mobile startups. MENA Apps has seeded the initial investment for the Arabreneur fund, with the intention of reaching $2.5 million this year as 10-15 angel investors come on board.

USAID will cover operational costs for the fund, while MENA Apps will support by leveraging its global network of potential investors and mentors; Arabreneur will also connect with universities throughout Palestine and the Arab world to further link entrepreneurs to international thought leaders.

“For years, USAID has worked with the ICT sector to implement programs that include skill-building, creating new jobs and linkages with international expertise all with the aim of propelling Palestinian firms to compete at a global level,” Ghassan Al-Jamal, the USAID Project Development Specialist-Private Enterprise Office/USAID West Bank and Gaza, said in a statement.

Abdul Malek Jaber also stated, “We have been working in Jordan and Dubai for two years and made 15 investments in start-ups, some of them are Palestinian start-ups. Now we start our operation in the Palestinian territories and we will capitalize on our partnerships around the globe to open the way for Palestinian Start Ups to make it to global markets.”

The initiative goes live this month.