In an effort to keep their gaming startup, Wizards Productions, afloat, founders Hussam Hammo and Sohaib Thiab pivoted into mobile, hoping to be able to build games quickly, and take a more agile approach.

At the time, Thiab spoke openly about the startup's failure to secure further investment and its other myriad challenges. Now, the team is back with a vengeance, following investment from 500 Startups in Silicon Valley. Hammo, assisted by previous cofounder Thiab, recently launched a new startup, Tamatem, this past March, to focus on mobile games and hopefully build the next Arabic hit.

500 Startups offers each of their companies $50,000 in funding and three months of incubation for 5% equity, which Hammo notes is a lower percentage than that taken by many incubators in the Arab world.

Hammo previously worked with Thiab ever since they developed Faye3.com, one of the first Arabic social networks, which they sold to Maktoob in 2006, after building a community of over 1 million active users in just 18 months.

In 2008, they left Maktoob to start their own gaming studio, Wizards Productions, through which they developed popular social games Arabian Hitman and Arabic Mafia, among 12 other titles. Their last game, Aqua Jam, marked their pivot into mobile. But even after the founders closed Wizards in December 2012, Hammo wanted to find a way to continue innovating as an entrepreneur.

“We had an opportunity to find jobs at another company with the connections we had at the time,” says Hammo, "but I couldn’t put myself in a situation where I am no longer an entrepreneur, even though it is really, really tough.”

A new focus on mobile

Now, the team is hoping to tackle the Arabic mobile market with a new game, Stars Quiz. Although the team's expertise is in social games, the mobile market is "less saturated," Hammo says. 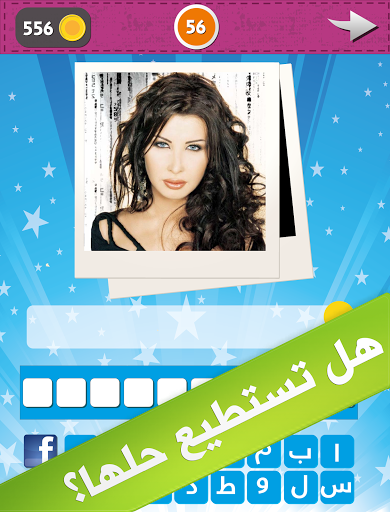 “In 2008 Travian dominated web games, in 2011 Peak Games dominated the Facebook games space, and we strongly believe that the market now needs someone to dominate the Arabic app stores. It should be coming from an Arabic company, rather than another company just trying to translate,” he says.

Stars Quiz, which came out just this week, is a simple identification game in which players compete against their friends to correctly name the faces of famous celebrities, singers, and public figures from across the Arab world. It’s currently available on Android and should launch for iOS in the coming days. A second game, '4 Pictures, 1 Answer', will launch on iOS this month as well.

These games are designed to be crowd pleasers, but I’m not sure they have the staying power to be truly viral hits. Pop culture references keep Stars Quiz interesting and maybe even attractive for some, but in the long run, the gameplay looks like it may be a little too simple to compete with the likes of Words with Friends or Draw Something.

Hopefully as they continue to iterate, Tamatem will hit upon a solid title that's simple enough to go viral but just complex enough to keep users coming back for more.

Following a model that more than a few startups in the Arab world have followed, Tamatem's front office will be in Silicon Valley at 500 Startups, while its back office and developers will be in Jordan; a designer will work from Tunisia. “You can find great quality engineers and designers in Jordan that don’t require a lot of resources to train,” says Hammo.

"People in Jordan don’t embrace failure as a good thing," he adds. "they just want to ensure it won’t happen again, instead of learning from their mistakes. This is the difference in mentality that I’m seeing here [in Silicon Valley], where it's rare to see entrepreneurs successful on the first try.”

As they end their incubation period and begin scaling on their own, hopefully Tamatem can put their lessons into play. We look forward to their second release coming soon on iOS.