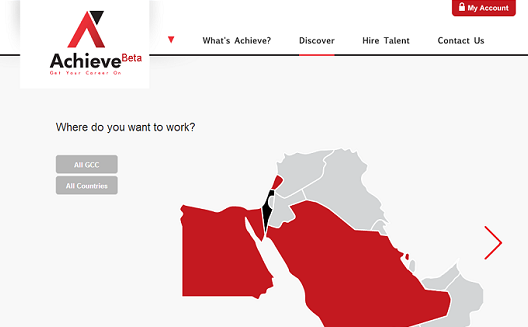 While the Arab world has seen several job portals popping up over the past few years, the newest entrant into the market is instead focusing on enterprise solutions at afforrdable rates for startups, and larger companies alike.

But this platform isn’t primarily targeting job seekers, it actually acts as an online Recruitment Management System (RMS) for recruiters and companies looking to find potential hires for a fairer price. Since startups usually can’t afford to invest in HR, but still try to source good talent, Achieve is hoping to fill the gap.

Quite frankly, however, the market is getting pretty crowded with competitors like Bayt.com, Akhtaboot, Laimoon, Wuzzuf, Gradberry, Careerise, and newcomer Jobzella, paving the way. But Lebanese founder Jade Saab, alongside cofounder Toufik Lawand, is confident that Achieve can rise above the din of the traditional search bar to make the job search experience much more focused and manageable.

The portal is open across the Arab world from Egypt to Iraq and down to Oman. But they are first targeting Lebanon in their public beta which is expected to last the rest of the year. At present, the rest of North Africa isn’t included.

The founders are hoping to differentiate Achieve from other traditional internal RMS services as well, like Taleo or PeopleSoft by Oracle, which can be costly for large companies to purchase, install, and train staff on- making them completely out of reach for startups. “Other RMS services aren’t online and come in a large expensive package that big companies can afford and smaller ones can’t.” Achieve offers a more affordable solution that allows member companies to pay as they go. But is their solution really different from their competitors?

I visited with Saab in his small shared office in Beirut where he explained how the idea first came about when he, an HR professional and recruiter himself, caught on to the now well-known lack of CV-writing and interview skills among recent graduates in the region.

After a stint as a career counselor, he decided to develop his own offline program for university students, offering career and application advice for young jobseekers. “As a recruiter and a job seeker, working on both sides of the fence, I noticed that the platforms that were out there just weren’t cutting it,” says Saab. “They are just CV databases and aren’t accurate in searches or in posting job vacancies, and from the job seeker side they were hard to use."

He later decided to take his program online, but quickly noticed that career guidance as an online platform wasn’t going to be monetizable, or even useful, for most. So he began developing a job portal concept to compliment the site.

“The supplement of the site actually became the core business,” smiles Saab – a classic case of lean startup-style iteration. He quickly pivoted to focus on what once was just a small piece of his idea, and quit his job just last year to begin to develop the project.

Meeting the competition head on

Saab has created a flexible pricing structure that lets companies list single vacancy posts and view different levels of applicant details. After a quick price comparison, we saw that Achieve's prices are slightly less expensive than Bayt.com. But Achieve is actually not using pricing as their main differentiation. Instead, they focus on functionality and a simpler interface.

“From the recruiters point of view they only dealt with sourcing as a place to get CVs from, but not recruitment management. So we decided to incorporate the RMS which would allow them to sift out candidates until they reach the top one or two people they want to hire,” he says. “So instead of just creating a job vacancy and receiving 100 CVs and printing them out and going through them, we give them the ability to do that all online.”

Although the platform doesn’t have many job listings yet, mostly sourced from Saab’s contacts, their main focus is to sign up companies to use Achieve as their internal HR solution first. This will also help Saab’s team of 6 compile a database of new job listings and to monetize.

Like their competitors, the site is completely free for job seekers, who can create their own profiles and begin searching for positions. But Achieve has much more specific criteria than any other site I’ve tried, but this hyper-specificity can make it difficult to find jobs you would regularly stumble upon if you don’t know exactly what you’re looking for.

Users can also create a profile via LinkedIn, as does Laimoon, which automatically populates their resume on the site.

Unlike other job portals however, Achieve lets applicants monitor their current progress on each application. Recruiters can begin narrowing down their field of applicants by either promoting them or removing them from consideration along a hiring timeline. This lets users know whether to keep their hopes up or to move on to the next offer. 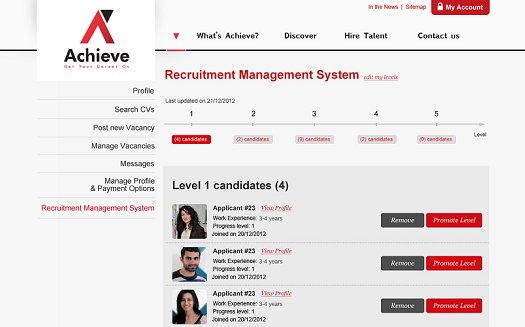 Achieve’s intense focus on the online RMS element, which Akhtaboot only offers if a client calls their customer service department via phone, presents an interesting model, whereby companies share the same technology and platform but use it on an as-needed basis, offering a lower cost than traditional internal databases while also building Achieve’s stockpile of searchable startup listings.

But building the platform hasn’t been easy; the startup’s biggest challenges have been technical. After outsourcing the site’s development, Saab had trouble with the developer who held the project hostage for a time before Saab could end their agreement and take development in house. After hiring a developer on staff and rebuilding, the team had to push their original launch date from December to just this week.

“The important thing is having a good core team,” says Saab. “It might set you back on time, but when you have reliable people, you’re going to get things done.”

Now that they’ve launched, Achieve’s next challenge, according to Saab, will be getting a foothold in the market. “We have a lot of entrenched competition, big companies that have been here for a while,” he says. But he’s hopeful that offering a recruiter-focused service with easy functionality for job seekers as well will separate them from the pack. But we'll have to see if an already crowded market has room for just one more.