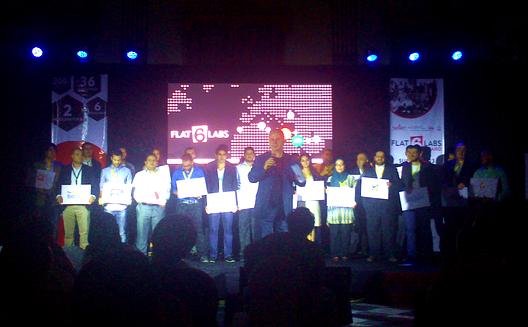 Cairo accelerator Flat6Labs held its 6th Demo Day yesterday, where we were treated to the now customary mix of startup stands & stage spectacles.  This time, there was cake as well, as Flat6Labs celebrated its second birthday.

This batch of graduating startups seemed to all be practically market-ready, which is an improvement on many previous rounds. Consumers’ needs were covered from birth to death, literally.

El-Wafeyat (the deaths) is an online platform that allows users to manage everything surrounding death.  To start they provide an online obituary and memorial posting service.  In the pipeline are services such as death notifications and funeral management.  The saying goes that nothing is certain in life but death & taxes; but in a country like Egypt even taxes aren’t certain, so the team have chosen possibly the only target market that literally includes the whole population.  This is certainly a service that promises to disrupt the most traditional of events, so the population may not be ready for this online revolution, but the founding team contains the experienced Con O’Donnell and Ashraf Maklady, both ex-Sarmadi, both experts in moving people to the online world.

The Baby Boon targets the other end of the life spectrum, with an e-commerce portal that caters to mother and child from pre-birth until the age of six.  There are already thousands of products and several major services listed on the site, so the team can rightly claim that they are the only one-stop e-commerce shop for all baby needs locally. It’s niche but also mass-market, so they should do well.

Pngine (not to be confused with Kngine), works a bit like Storify in reverse, allowing users to craft stories on its site and then share them on social media. While the technology might be cool, revenue streams are untested and unclear. Similar sites have come and gone, so the team will have to do something clever to make this a profitable venture.

Tagaddod (renewal) is in waste management startup, currently focusing on producing biodiesel and soap from waste vegetable oil. The team have a number of well-defined revenue streams from traditional and stable sectors, but their biggest challenge will come from government regulations that have given rise to a big black market.  Big players in the industry might also not take kindly to an upstart, so they could face challenges there. I do hope they succeed because clever profit-generating businesses like this are the best way to tackle the huge waste problem.

PieRide promises to solve daily commuter problems by offering a chauffeured ride-sharing service.  Unlike local car-sharing schemes, PieRide will have their own fleet of cars.  They have one route from 6th October to Dokki and adjacent areas, with more planned in the future.  The business model is subscription-based, and there’s lots of room for premium in-car services, such as female-only cars or in-car snacks.  While capital expenditure is relatively high, revenue streams are clear and proven. It’s not sexy, but it should easily make a nice profit.

Koretna (our ball) is a social platform for the amateur football community. Players can discover and book football fields, organize matches, communicate with their football network, keep track of statistics, rate each other, upload multimedia, and discover tournaments and leagues to join. Players register for free, and pitch owners get a year free then have to pay a subscription. Although some sites like Footballize cater to fans of professional leagues, and sites like Duplays that encourage casual sport, there aren't any sites in the Middle East that address local amateur leagues, despite the fact that there are over three million amateur players locally, and most fields struggle to get 50% usage. Factor in how many more millions of players there are in nearby countries, and this is another not-so-sexy but solid business model.

Numbers attending this Demo Day were down from the last event, perhaps due to the current political climate, but all of those attending were in good spirits.  For once, the savoury food on offer was good, although there wasn’t enough of it, but maybe I just like complaining about food.

Flat6Labs also announced that they were changing their model slightly; there will be only two intakes per year, with a longer acceleration period, more companies per batch, and also more seed money. The website has been revamped; although it’s always looked good, they’ve finally added an Arabic language option.

We’re yet to see a graduate startup make it big or make significant profits, but Flat6 are expanding locally and regionally, so they’re sure to keep making waves in the entrepreneurial ecosystem for the foreseeable future.