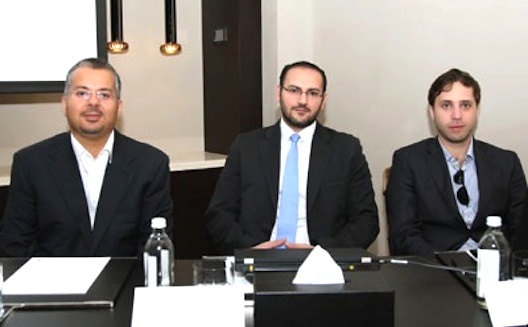 iMENA Holdings made headlines yesterday with the news that it invested US $8 million in HelloFood, Rocket’s online food ordering platform that operates in the Middle East, Latin America, Asia, and Central and Eastern Europe.

Announced as part of a strategic partnership, the investment is one of the largest reported deals made by an early stage investment vehicle in the Middle East; it also makes iMENA the first reported local firm to invest in a Rocket Internet company. In May, HelloFood raised $20 million from investors including Swedish firm AB Kinnevik and Moscow-based Phenomen Ventures.

“Rocket don't usually do [deals like this], but this comes out of a long term relationship we’ve built with the founders, based on discussions that go back to 2005 and 2006. Everything came together this summer with the team that we have and the funding that we have.” says Khaldoon Tabaza, iMENA’s co-founder and Managing Director.

With iMENA's investment, HelloFood is looking to expand further after launching in Saudi Arabia and Morocco this April; currently its traffic in Saudi Arabia, where it's primarily focusing, is dwarfed by that of Kuwait’s Talabat and Egypt’s Otlob (HelloFood doesn't even mention its Moroccan arm in its press release). [Although overall traffic on these sites is not an indicator of conversions, nor a measure of traffic in Saudi Arabia, Talabat and Otlob rank higher in Saudi, both around 1,000, than HelloFood, which ranks below 3,500].

Another upcoming competitor in the Saudi market will be FoodOnClick, the Arab world arm of Turkish success Yemeksepeti, which is also eyeing the Saudi market, after opening operations in Oman and Qatar. [Disclosure: MENA Venture Investments, which shares management resources with Wamda Capital, has invested in FoodOnClick; Fadi Ghandour, who is Chairman of the Board at Wamda, sits on their board].

If HelloFood is in need of a shot in the arm, iMENA has a plan to, as iMENA cofounder and CEO Adey Salamin said in a statement, “[roll] out Hellofood across various countries in the Middle East to address the demand for a highly efficient and quick food order and delivery service in the region."

Yet, Tabaza, says, it’s not that the ordering service has had trouble in Saudi; it’s been growing more quickly in its first four months in Saudi Arabia than any other HelloFood company worldwide. However, he says, “having a local partner can really help maximize success.”

That’s a lesson Rocket has learned before, after closing Mizado, although its other properties, Namshi and Jumia, seem to have avoided that fate by choosing teams with local market knowledge. By bringing a local investor on board, it might give HelloFood a fighting chance.

The announcement also, in a sense, marks iMENA's arrival on the Middle East investment scene. Over the past year, the investment house been quietly making bets on e-commerce and services startups, but few know what it does, exactly, laments team member Ritesh Tilani, previously the founder of mobile app CareZone. "Some people think we're an incubator. We're not, in the traditional sense; we prefer to call ourselves an owner/operator."

Technically, iMENA is a holding company. It's the brainchild of Salamin, who worked for years in consulting and investment, both abroad and in the Middle East, also launching several companies, and Tabaza, one of Jordan’s earliest internet pioneers, who previously founded early internet portal Arabia.com, cofounded ad network NetAdvantage and payment mechanism OneCard at N2V, and then founded Riyada Ventures, an SME investment vehicle acquired by Abraaj Capital in 2010 [Disclosure: Wamda was initially launched by Abraaj Capital]. In 2009, Salamin joined Tabaza at Riyada Ventures, and earlier this year, they officially launched iMENA.

In keeping with the model built by N2V, and perhaps not straying far from the Rocket playbook, iMENA focuses on “build[ing] new online businesses based on successful and proven business models in other developed and emerging online markets.”

Thus far, it's invested in Amman-based reservation booking site ReserveOut, Desado, a Dubai-based homeware e-commerce site, OpenSooq, a regional classifieds site, and SellAnyCar.com, an online car marketplace, and it typically aims for a path to a majority stake.

“We are also open to a VC-style minority stake, but normally, we try to get to 51% as quickly as possible,” says Tabaza. “We rarely coinvest or follow another investor. There are companies where we own less than 51%, but we are the largest investor in those companies.”

The reason for that is, he explains, in a tough market without much infrastructure, a hands-on approach is necessary.

“It’s not sufficient to simply provide early stage funding,” he says. “If there are no professional service providers in the market, companies will find it difficult to grow. If you have a lack of seasoned entrepreneurs, that will be another challenge. When you don’t have large companies to acquire small companies, you have additional challenges.”

By mostly owning the companies it invests in or builds, iMENA is designed to avoid what Tabaza deems business model risk and technology risk, as opposed to execution risk. It does that by bringing startups in-house to guide their actions and support with a services arm, iMENA services, that offers strategy, technology, and marketing advice.

Bashar Thawabi, ReserveOut’s founder and managing partner, is blunt about what that means for his company.

Aside from the guidance and expertise that Tabaza and Salamin offer, “I have no idea who the cleaning company is who cleans the office,” he says. “The amount of work that goes into getting offices, furniture, making sure it's a smooth transition and it’s clean when people come in, everything is managed and operated by iMENA. It’s amazing.”

One of the biggest benefits, however, is the extended community. "The CEO of OpenSooq sits behind me, and iMENA Services is down the hall. Even though we are separate entities, we all have the mentality that we are part of something bigger," says Thawabi. "You don't feel that there is competition."

“[The iMENA team] are very supportive but not intrusive,” says Muhammad Chbib, Desado’s CEO and founder, of the iMENA team. “They have a great network in the Middle East and beyond, and there is not a single meeting that they could not organize for me.” When it came to entering the Saudi market, he says, iMENA helped Desado connect to partners on the ground to source talent.

By setting up a holding company as opposed to a typical VC, Tabaza argues, iMENA is better able to do exactly that, helping startups scale in new markets by plugging into an existing on-the-ground setup.

That might not always eliminate the inevitable risk that comes with localizing any business model (in the sense that "business model" risk can't be entirely eliminated in a new market), but the iMENA pipeline is designed to ensure that the holding company can continue injecting finance to grow and iterate its companies as it sees fit, without depending on outside investors for multiple rounds of funding.

This "allows the founders to focus on building real traction on the ground rather than be bogged down by funding round and after funding round," says Laith Zraikat, one of Jeeran's two cofounders, who consulted for iMENA for a few months last year after leaving Jeeran earlier in the year to start something new. "I think this model works very well, but you need the right management. iMENA have that in my opinion," he says, explaining that their experience allows the two founders to forge deep connections with founders.

"Bringing in such a VC is like you've added a cofounder who is going to work with you day in day out, not just an investor," he says. "This is an ideal combination, however, the appeal of this model to founders -or lack of it- is probably entirely a personal preference."

Tying up with telecoms

Indeed, iMENA’s structure may not suit founders who relish autonomy. But that's not its selling point; its partnerships are, especially those wiith regional telecoms. One publicly announced partner is Etisalat, which, it’s implied, will assist with HelloFood’s expansion, while ReserveOut already leverages its loyalty program and SMS and data services.

Connecting with telecoms, one of the only mature elements of the Middle East online ecosystem, Tabaza says, was part of the design from the beginning. Today, telecoms’ demand for content opens up effective revenue streams for startups that might otherwise struggle to monetize with advertising.

This focus on enabling those streams and working closely with its strategic partners makes iMENA “very different from N2V and Rocket,” Tabaza claims.

At its heart, iMENA seems to be focused on minimizing risk as the company perceives it, by reducing the input of external investors, keeping startup development in-house, leveraging revenue streams with telecoms, and looking for specific types of founders, a model, again, not far from Rocket, which is famous for hiring MBAs with experience abroad. “A lot of our talent comes from abroad or has spent time abroad,” says Tabaza.

In a market as tough, fragmented, and nascent as the Middle East, it’s a model that may be optimal for some startups. “We target low-hanging fruits,” Tabaza describes. “We don't want to go through significant uphill battles [when] there are so many low-hanging fruits in the region, one can invest, build, or create a partnership for. We need to prioritize where we invest.”

And with HelloFood, iMENA will get its testing ground; even a Rocket company isn’t necessarily a low-hanging fruit in Saudi Arabia.