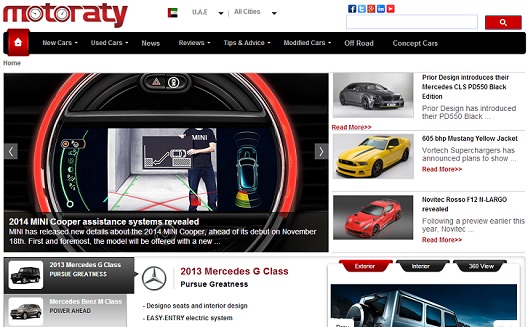 Auto content portals continue to crop up in the Gulf. The most recent entrant is new car guide Motoraty which, after launching on June 16, 2013, is already generating revenue and building up a decent userbase, with over 100,000 Facebook fans, estimated to reach 180,000 unique users by the end of this month (up from 142,000 last month).

It’s no secret that Gulf consumers love cars, but within the past year, it seems that niche content portals focused on auto news are cropping up to serve a very hungry market. ArabsTurbo, another site that launched last November, has built up 32,000 fans on Facebook, partly thanks to redirects from its broader AWI network, which includes popular fashion site Layalina. Yet it hasn't surpassed Motoraty.

In the classifieds dimension, Dubizzle, which is currently undergoing some changes, has historically seen a healthy percentage of its posts in the auto category. Now, Motoraty wants to combine the best of both worlds, to build a content portal that showcases the newest models, while eventually offering a classifieds section for used cars. Although its competitors are popular, there's clearly room for another player offering a new type of content to the market.

At first glance, Motoraty is a straightforward news site, offering reviews and video test drives that showcase the newest cars, a mix between Consumer Reports and Top Gear for the Arab world.

A deeper look reveals several tools that others lack: a car loan calculator, a monthly payment calculator, a fuel calculator, dealer reviews, and car comparison tools, in addition to a slew of reviews for over 860 vehicles listed on the site, and news on car features and modifications, written and aggregated by its team of six. To offer expert advice, the team leverages two content partners.

Its user reviews of dealerships also set the site apart; users can log on to add ratings and their own opinions on various dealerships. “Some dealers really provide an excellent service; they really work hard and make sure they do good customer service, while some offer you a bad experience,” says cofounder Johny Giacaman. Allowing customers to differentiate between the two is a core part of the site's value.

The team also films their own test drives, albeit with amateur videos. By 2014, they hope to secure a race team in Dubai to test drive each vehicle and offer more formal video reviews.

In comparison to ArabsTurbo, Motoraty is an underdog. Its founders didn't start the company as part of a larger media empire, and yet, they didn't come in directly from abroad like the founders of Dubizzle, either. Johny Giacaman and Islam Al Rayyes both held down long-time positions at the Abu Dhabi Media Company, and then, earlier this year, decided to try their hand at building their own startup, based on their love of cars.

They quickly built up a team of 13- six content writers, a graphic designer, and six developers- and began by building a directory of every car dealership in the GCC. “Our editorial team actually called every single dealer one by one to verify their information,” says Giacaman.

Saudi Arabia presented some challenges, as many of the dealerships were reluctant to release their address, despite the fact that Motoraty seeks to direct users to their stores. But after some tedious legwork, Motoraty got what they were looking for.

Saudi, which accounts for 50% of their traffic, is their key market, followed by the UAE, and the rest of the GCC. Giacaman was a bit surprised by the amount of interest coming from Saudi Arabia, as the site is currently only in English, but Motorary will launch in Arabic this month, and the founders hope to eventually expand into North Africa and the Levant.

Motoraty's biggest challenge, along with every other content portal on the planet, is monetization. "It’s a challenge,” admits Giacaman.

The revenue streams it has planned include brand sponsorship, traditional display advertising, and premium features for dealerships who pay for test drive leads. Thus far, they've capitalized on sponsorships. “We’ve approached a lot of people in the market, but Chrysler and Jeep were the first people who trusted the brand,” says Giacaman. “From day one we had sponsors.”

In the future, sponsorship packages will include content bundles, which will feature specific brands or vehicles in articles and reviews, and options to display a new model of car alongside search results in Motoraty's recommendation engine (i.e., if you search for an SUV on the site, it could show you a Mercedes G Class SUV in a sidebar, should Mercedes sponsor the site, Giacaman explains).

And, as mentioned, the team plans to turn on classified ads to compete with the likes of Waseet and Dubizzle, by the end of the year. However, this won't become their core business, says Giacaman, as he and Rayyes want to keep the platform focused on new cars.

Adding classified makes sense; just as AWI is using ArabsTurbo content to direct users to purchase on Waseet, Motoraty could draw interest with content and then funnel readers into transactions by directing to options for used cars in their classifieds. If they execute well, it could be an ideal combination; Motorary offers more tools and expertise than ArabsTurbo, which often publishes goofier entertainment content, like videos of car accidents and vehicle demolition. Motoraty also offers a layer of unique content and tools that other classifieds simply don't have.

“It’s critical for us that we offer trusted data and information,” says Giacaman. This trust and expert advice could separate them from competitors.

In true startup fashion, they've also managed to launch without an office. Now, as they look to expand the platform by developing more content, finding new sponsors, launching in Arabic, and debuting classifieds, the Motoraty founders hope to also an office space.

Right now, Giacaman and the Motoraty team are working from their homes. “Some [employees] are in their houses, like me; some work at coffee shops; we work at different places. It’s an agile operation at the moment, but it’s well structured,” he says.

For other new entrepreneurs, especially those with other financial obligations, Giacaman offers a bit of advice: “You really need to make sure you do your homework properly. I have a family, I’m doing my MBA, and when I decided to do this it wasn’t an easy decision,” he says. “If you don’t have all the strengths, make sure you partner with the right person who can deliver with you, because sometimes success comes when you complement each other.”