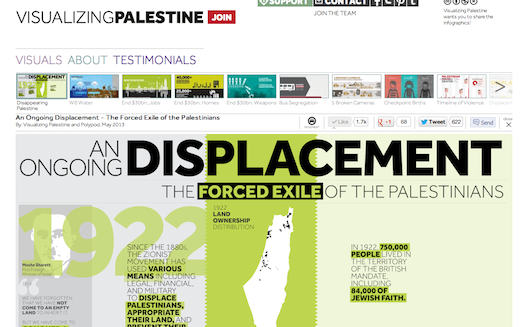 In 2009, Ramzi Jaber quit his job as a civil engineer in Jerusalem to organize TEDxRamallah. Upon moving to Ramallah to begin work on the conference, Jaber says he was “floored at my own ignorance [of people’s struggles in the West Bank]” especially in light of the huge amount of data that was available. “If even I [as a Palestinian] didn’t know the story of the Palestinians,” he asks, “why should foreigners, why should anyone know it?"

Visualizing Palestine, the hybrid startup and non-profit he went on to launch in collaboration with TEDxRamallah co-organizer Joumana al-Jabri, operates with the same DIY approach as the conference; it produces carefully-designed infographics in hopes of changing how the media and public think about Palestine. 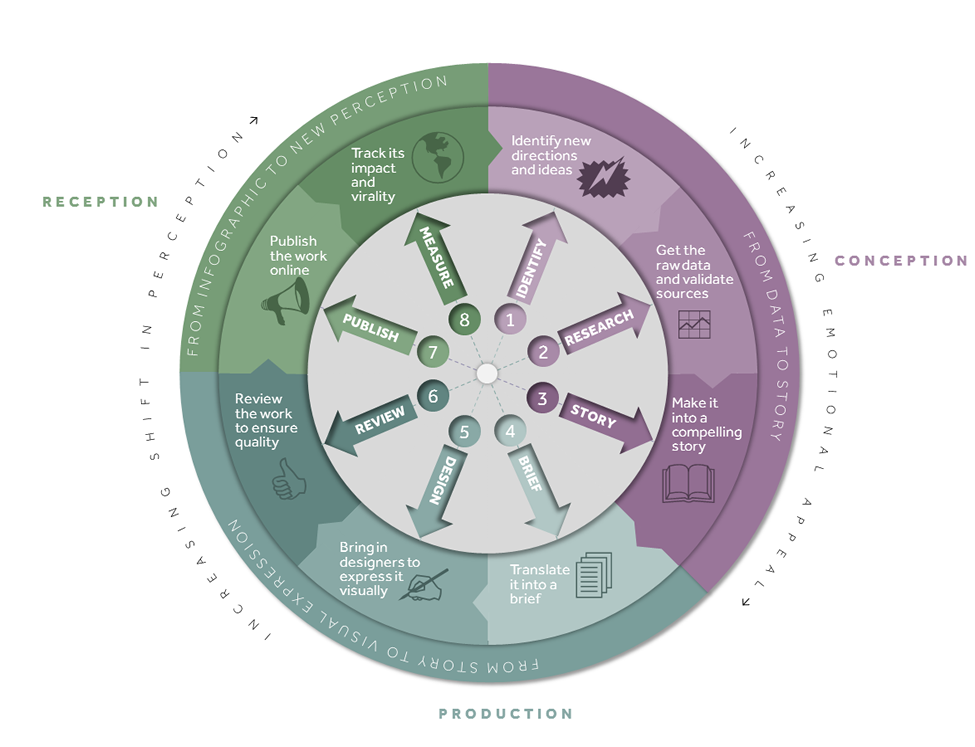 The key word here is "carefully;" the company's surprisingly large team of 13 managers, designers, and researchers, plus 8 – 14 volunteers, implement an eight-part process (shown to the right, click for larger version or see it here) to turn raw data into a story, then tell that story through an arresting infographic that will hopefully go viral. The process is meticulous enough to warrant the large team, Jaber says.

Magazines and websites then buy and publish the infographics, unless they were commissioned, in which case clients then print and distribute them.

Beginning today, Visualizing Palestine will also dip its toe (joining many others) into crowdfunding, launching an Indiegogo campaign to fund 20 new infographics on issues like ID discrimination and children’s rights.

When asked why he and al-Jabri zeroed-in on infographics when brainstorming how to tackle this complex issue, Jaber invokes an experience he had during TEDxRamallah: a visualization of speakers’ nationalities revealed that the conference themes were truly global, in a way he hadn’t realized before. Also, Jaber says, “Images are simply more visceral – we’ve been seeing much longer as a species than we’ve been reading. Infographics appeal to base human abilities.”

For instance, a soon-to-be-released infographic about the uprooting of olive trees in Palestine shows the number of trees to be 33 times greater than the number of total trees in Central Park. "We only know something is huge if something tiny is next to it," Jaber says.

Learning how to tell stories

Despite the sleek graphics (snapped up so far by Al Jazeera, the Huffington Post, and The Daily Beast among others) now coming out of the company's idyllic office in Sursock’s Co-Working +961 space, Visualizing Palestine didn’t exactly hit the ground running. After launching in 2011, Jaber and al-Jabri’s first order of business was to organize a series of workshops in Amman and Dubai, bringing in researchers and designers in hopes of creating the kind of sophisticated visualized data series they thought could change the conversation.

“It was a complete failure,” Jaber laughs ruefully. “To this day I refuse to speak to some of the participants!” Some of the workshop members, he says, came just to socialize, while the serious researchers and designers faced problems producing work the other group found usable: researchers had trouble condensing massive amounts of data, and designers couldn’t work with data that hadn’t been carefully groomed.

It was in dealing with this failure that Jaber and al-Jabri were able to build and streamline the process at Visualizing Palestine into what it is today. Shortly after the workshop debacle, they realized that stories are crucial to connecting with people. “The epiphany was that we needed to build a team with specific skills” to put the data into story form, and then visualize it, Jaber explains.

While Jaber insists that Visualizing Palestine is indeed a startup “with a social mission,” from certain angles the outfit seems more akin to an activist nonprofit. But he rejects having to choose between the two. “I do not want to pigeon-hole [the company by choosing] between a company or activist group. We are creating a new model that successfully incorporates both revenue generation and addressing social issues in an innovative manner,” he says.

Neither Jaber nor al-Jabri have collected a salary in the two years they’ve been active (they’re still living off savings from their previous careers as engineer and architect, respectively); what revenue streams there are – including commissions (from media sites, NGOs, even the UN), grants, awards, and eventually merchandise – are re-invested back into the venture.

The Visualizing Palestine team has also formed an umbrella group – Visualizing Impact – which creates infographics about social issues of all stripes. VI’s first graphic, on politicians’ salaries, went viral this week, retweeted over 100 times by prominent journalists and others.

In search of a new revenue stream, the decision to try crowdfunding seems a canny move, for a number of reasons. As Jaber realized at TEDxRamallah, those most invested in the Palestinian cause are increasingly people without ancestral ties to the land. The Indiegogo campaign may tap into this surge of interest in the plight of Palestinian communities, especially among young people in the West (those most likely to be familiar with crowdfunding, and Indiegogo in particular).

But it’s never really been about the profit potential for Jaber or his team. His commitment to the Palestinian people is palpable in conversation, although he’s careful to make clear that neither he nor his organization is aligned with any specific agenda.