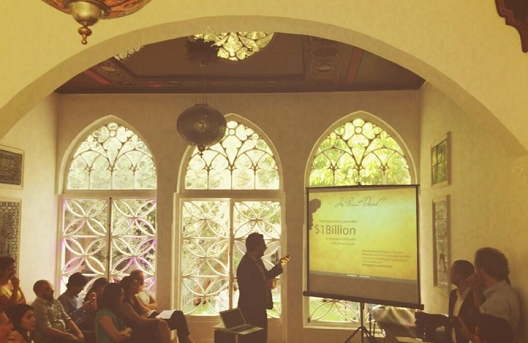 The evening saw nine startups pitch their business for a new round of investment from Lebanese and regional VCs and Angel investors. A tenth company, Konnecti from Egypt, couldn’t make it to the event. The ideas were as diverse as the capital amounts they pitched for, ranging from around US $200,000 up to Falafel Games asking $1.5 million.

Here’s a look at the nine pitches:

1) Best Bank Deal is an online hub that links banks and service providers with customers. Still in beta, the platform is only available in Lebanon, with plans to expand next to Jordan, Qatar, Kuwait, Bahrain, the UAE, Egypt and Saudi Arabia. Founder Zeina Allam Adra introduced the platform, explaining that the requested investment will be used to accelerate the expansion process to these new countries. At the end of her pitch, one of the investors in the audience asked why the company needs the money for expansion when they already deal with local banks like Bank Audi who have branches outside of Lebanon. She replied explaining that their major need was actually recruitment, finding talent to cover new markets.

2) eTobb is an online medical Q&A platform, where patients can anonymously ask any question related to healthcare and get an accurate answer from professional doctors in the Arab region. Paul Saber, Co-Founder & CEO, explained that the platform takes a commission from the doctors featured on their pages and is free for customers who don’t opt for the premium version.

3) Fatooosh iAraby is an Arabic mobile app developer that has built over 33 apps, with a cumulative three million downloads. Their most popular, Fatoosh, a smart TV app, was launched in October 2012 and received its first round of investment from N2V. CEO Ahmad Barqawi, who had just arrived from the airport, explained that the company is planning to use the required investment to build up Fatooosh’s children section, which he believes differentiates them from competitors like Cinemoz and Istikana.

4) Natasawak is an online shopping platform launched by Imad Karam, who previously worked at Google in the UK, and Rami Audi. The exclusive member-only platform features three sections, Flash Sales, Boutiques and a Designer’s Corner available in English and soon in Arabic. The co-founders, who claim to be SEO experts, plan to use new investment to invest in a new marketing campaign.

5) Cheezu.me, an Oasis500 company, believes that printing photos on paper is not a thing of the past. The company specializes in photobooks, retrieving your photos from social media and turning them into a high quality printed book. Gaith Kawar, Co-Founder of TakTek Games and former trainer at Apple, claims that Cheezu is better than Apple’s photobook delivery, and faster, providing “3-day delivery anywhere in the world."

6) Falafel Games, led and pitched by Vince Ghossoub, boasted revenues of US $50,000 a month after previously securing $465,000 in investment. One of their most famous games, Knights of Glory, has seen 1,000 new downloads per day since its launch. Yet, Ghoussob revealed, the company's margins are not that large, as it's invested heavily in a team of developers and designers in Hangzhou, China, where it's based. Falafel would use the new investment to expand its userbase by integrating new languages including English, Russian and French, and releasing an iPad version soon.

7) I3zif, founded by Bisher Abu Taleb, is an online music education center that teaches users how to play on a musical instrument through pre-recorded video lessons in Arabic. Abu Taleb, along with his team of musicians, is working to launch the project in 20 different public schools across Jordan and has thus far secured U.S. $115,000 in seed funding from MENA Venture Investments. The company has produced 370 videos and currently has 340 subscriptions from 30 different countries. When asked if they would consider building an open-source instruction section on the platform, Taleb explained, “We are building a separate section open for users but we want to be sure to maintain our credibility.”

8) Moujaz is a news summary web app with similarities to Summly or Wavii, but it differentiates itself by being  compatible with Arabic and not requiring users to subscribe to a single channel, according to co-founder Shady Moadad. Their news summary service, which will be launching on mobile soon, is seeking investment to start working on B2B API licensing, ads and marketing campaigns.

9) Presella is an e-ticketing and event crowdfunding platform that offers event organizers and musicians a “risk free” sales channel; if an event does not sell a certain number of tickets, it can be cancelled without penalty. Founder Louay ElKadri revealed that the platform, which previously received US $38,250 in seed investment from Seeqnce, has sold tickets to 120 events in Beirut so far and will be releasing a mobile app in August.

eTobb seems to have some good potential, although they may face issues with demand, as Lebanese locals aren’t accustomed to checking for doctors online, and usually consult a doctor recommended by the family or close friends. One audience member also pointed out that renowned doctors won’t feel the need to be featured on an online platform to gain exposure, and probably don’t even have the time to answer public questions. However, if the platform itself can gain some credibility as a reliable source and incentivize doctor participation, perhaps Lebanese locals or even expats could benefit from the service, especially when looking for a medical specialist.

I downloaded Moujaz on Google Chrome to see how it works and i was not fully satisfied with its summaries; sometimes it would only select the first two paragraphs of a piece or randomly picks figures from the text, which may be due to the fact that the startup doesn’t have any on-staff editors or linguists, but only a team of engineers, as Shadi Moadad explained.

Following the LBA pitching event, Co-working +961 launched, in a beautiful outdoor space in the Sursock Palace Gardens. “It’s a place for the community, and from the community,” said Hala Fadel, Chair of the MIT Enterprise Forum for the Pan Arab Region.

“The level of startups has really gone up during the last couple of years,” said William Kanaan, Head of New Business Development for the Middle East and North Africa at Google. Google MENA also made a special announcement, introducing a new program they will launch alongside TechWadi, to connect competition finalists with mentors from the diaspora in Silicon Valley.