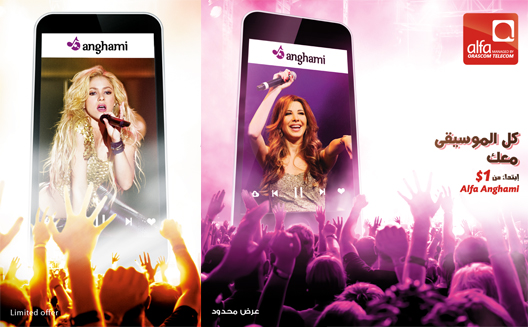 A little over a year ago, Anghami’s Strategy and Business Development Lead George Audi mentioned to Wamda that the platform was set to become the largest catalogue of international and Arabic music online in the Middle East.

Since then, the mobile and web music streaming platform born in Lebanon and serving the whole region, has been trying discover what music lovers in the region really need from such a platform. It has been refining its design, launching new platforms (Anghami became available for iPad earlier this month), and building partnerships with labels to increase its songs directory as well as its user base.

It seems that making users’ lives easier really pays off. With four million songs offered so far, a number that will double in the next three months, Anghami reached in the past year 4.3 million downloads from around the world (every country but The Vatican downloaded songs from the platform), is aiming at reaching 10 million users in 2014, and is expecting 20% month to month growth this year.

Saudi is – no surprise – the platform’s biggest market, with one million downloads, closely followed by Egypt, according to Elie Habib, Anghami co-founder and CTO.

Since people in the region are better acquainted with pirating music than paying for it, Anghami’s team made it easier for its users to pay, as they are convinced that the paid subscription model they have is still a good idea.

Now, Anghami has announced a partnership with Alfa, one of the two leading mobile operators in Lebanon, integrating 3G data plan to offer its users unlimited music on the go, under a bundle called Alfa Anghami.

Describing the $1 plan as “industry-disruptive,” Eddy Maroun, Anghami CEO and co-founder says it “is a first in the region and most of the world, to combine music and 3G data at this price.”

Such a bundle makes a lot of sense to both the startup and the teleco. “Our major user complaint was that it is too expensive to pay for 3G and Anghami’s subscription, and we have been seeing mobile operators investing in giving differentiation to their young customers,” says Habib.

Alfa Anghami has gradually been appearing in Beirut on billboards featuring three artists whose young fans are most likely to be addicted to smartphones: Nancy Ajram, Anthony Touma, and Shakira. The startup is planning for more aggressive offline ads in the coming months.

Still it was not easy to convince partners labels like Rotana, Platinum Records, Mazzika, Melody, Universal, Sony, EMI, Warner, and others to accept being part of a service as cheap as $1. “We had to prove ourselves first in order to convince the labels,” says Habib.

The bundle is already gaining buzz before its public launch; as several thousand of users already signed up in the past five days. “This is a proof that the need is there and all we had to do is launch with the right pricing,” Habib adds.

The startup is working on launching the same “industry-disruptive” model with 14 mobile operators in the region in several countries.

Building exclusive partnerships with regional and global labels is very costly, which makes it hard for a startup like Anghami to reach sustainability in just one year. “We are expecting to start making profits in 2014 because we will be launching many ad campaigns,” says Habib.

“We are doing way better than anyone else in the region.”