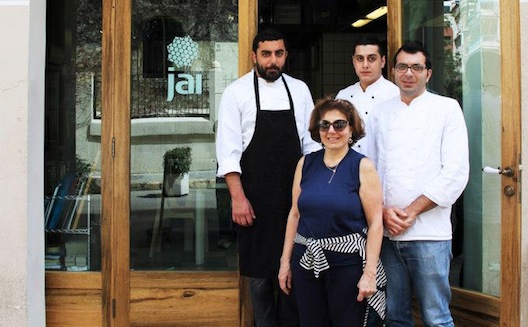 This is the first in a series on the business of starting a food & beverage company in the Middle East. Check back periodically for more profiles.

Dining at Beirut’s Jaï Kitchen is a singular experience in the Lebanese capital: not only are South and Southeast Asian flavors hard to come by here, but Jaï’s only table – booked ten days in advance, according to chef Wael Lazkani – is wedged right up next to the burners, refrigerators, sinks, and mise en place stations. The cooks, who prepare up to 60 covers a day (mostly for delivery) rush around you when it gets busy, barking at each other and carefully shoving hot food into the insulated square backpacks of waiting motor scooter delivery drivers. 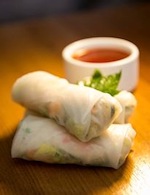 The dishes, precision-honed versions of staples based on Lazkani’s semiannual trips to Asia, are spicy, fresh, and the temperature they should be whether they’re served on a plate inches from the cooks or in a plastic container at your desk. It’s as close as you can get in Beirut to a plastic table on a Bangkok sidewalk. Time Out Beirut food critic Daniel Hilton recently described the butter chicken to be “as good as any we’ve had in India”; the summer rolls were “literally bursting with breezy, herby, and crispy filling.”

But it’s not just expats nostalgic for their gap years who love Jaï; Lebanese too have fallen for Lazkani’s cooking, despite what have been described as their unadventurous palates. Over coffee one morning last week, Lazkani marveled at his luck, as he calls it, in “hitting a need in the market I didn’t even know about.” Open only a year, the restaurant has tripled the numbers of covers it does per night, and exceeded its seven-year projections.

His success is partly a result of a dedicated fan base comprised of Lebanese ‘foodies’, excited by Lazkani’s fresh approach, who have marketed the restaurant solely by word of mouth. “Once we opened,” he says, “the larger foodie community in Lebanon started promoting like mad, even my competitors” – like Souk el Tayeb’s Kamal Mouzawak, who had a standing weekly reservation for his friends at Jaï’s table – “helped me get business.” One customer pulled him aside after dinner and said “you just keep cooking; we’ll handle the marketing.”

Just as it is for any startup, word of mouth buzz is music to a founder's ears. Jaï’s popularity has not gone unnoticed by potential investors. Lazkani has been approached with three business proposals, two of which involved plans to open franchises in the Gulf and eventually Saudi Arabia (a market Lazkani describes as being “the holy grail” for his potential investors). But Lazkani insists there will never be another Jaï. “I don’t want standardized recipes cooked by different chefs… [if I were to franchise] my job would be supervision rather than creative – that’s not what I want,” he says. As food and beverage startups throughout the region make lucrative franchising deals faster than ever before – like Just Falafel and Mandilicious – this is a more unique stance than ever. 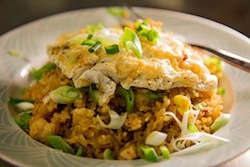 He attributes his success to three factors, lessons he’s learned along the way. The first is to do one thing, and do it really well. It’s the prioritizing of the food over potential profit that has led to Jaï’s quick success, Lazkani believes. He opened Jaï against the advice of everyone he spoke to – including a Lebanese bank loan officer who said to him “look at what’s working and copy it” – and was “terrified” that the Lebanese would reject unfamiliar flavors. Still, “I thought we needed more small, food-dedicated institutions rather than the glitz and glamour of the expensive, bland restaurants.”

While he’s devoted to authenticity of his product – he imports many ingredients from Southeast Asia – the second lesson he’s learned is don’t be afraid to change. He’s turned on a dime, changing recipes based on the whims of the market: “I’ll compromise on anything,” Lazkani told me. For instance, when customers said his chicken korma was too spicy and “coconutty,” he toned it down; he also changed the noodles he uses for pad thai based on customer feedback.

He also prioritizes staying intimately involved in the hiring and training of his staff. “My team is beyond everything to my success. I’m there all the time, listening to everything, driving everyone crazy with my micromanaging.” Preferring to hire people with no experience in the food service industry, he trains them from the bottom up, from hygiene, money management, English courses, and, of course, cooking. “I’ve even taken my staff to the doctor and dentist,” he laughs. The third important lesson he’s learned from Jaï, he says, is to make your staff your family.

But even if there will never be another Jaï, that doesn’t mean Lazkani doesn’t want to scale. Despite the “times of war” Lebanon is going through right now, he says he’ll decide in the next six months whether to open Jaï in a “real restaurant” space, big enough for five or six tables and a bar. “Income from a bar would help,” he says, “free up some money to dig deeper into the food; I could make my own noodles [he recently attended a workshop in Bangkok], put duck on the menu, grow my own micro greens.” To make this happen, he estimates he’ll need an investment of $200,000 USD.

Speaking to him, one gets the impression that he’s not in any rush to move on from Jaï. He’ll be happy as long as he keeps getting paid – however modestly – to cook the challenging food he loves for a community of people who appreciate it.