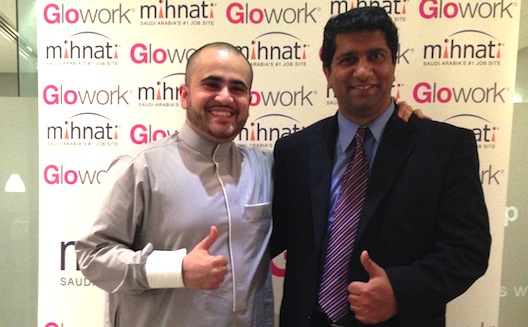 Glowork, the Saudi recruitment platform for women, and Mihnati, the Saudi platform built with global recruitment technology, have announced a strategic partnership aimed at empowering women and benefit the Saudi labor market.

“Together, with our collective ability and shared goal of positively impacting employment in Saudi Arabia, we have several exciting initiatives planned to transform hiring,” Khalid AlKhudair, Glowork’s founder, said in a statement. In 2012, Glowork entered into a public-private partnership with Saudi Arabia’s Ministry of Labor, and last year, the platform was acquired for $16 million USD last year by SAS Holding.

“What the partnership does is bring two players that have complementary service offerings to the Saudi job market,” Monis Rahman, the founder of Naseeb Networks, told Wamda.

Given the large amount of overlap in both vision and clientbase, the partnership seemed a natural fit, he says. “[Uniting Mihnati’s] technology platform with Glowork’s ability to create offline events makes for a powerful combination.”

Naseeb Networks, which was founded in 2003, is a Silicon Valley-based company that builds recruitment, social networking, and classifieds services; its two most famous properties are Naseeb.com, a Muslim online network for social, business and matchmaking purposes, and Rozee.pk, a Pakistani job recruitment site that launched in 2007.

To date, Naseeb has secured funding from Reid Hoffman of LinkedIn, Marc Pincus of Zynga, Fadi Ghandour of Aramex, and Arif Naqvi of Abraaj Capital, closing a $2 million Series A round in 2008 led by Draper Fisher Jurveston, the Menlo Park-based venture capital firm that has also invested in Baidu, Skype, FeedBurner, Yammer, and Tesla Motors.

Mihnati will work closely with Glowork to support its initiatives, including Glowork’s career fair, A Step Ahead, which will offer two days of soft skill training and employment opportunities to local women on April 6th and 7th in Riyadh. More collaborations are on the horizon, Rahman says.