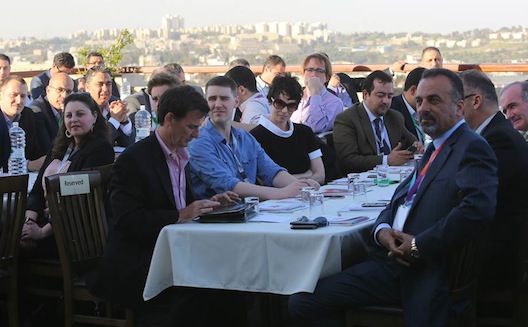 “These startups are as good as any in Toronto, Barcelona, or London,” said Palestinian entrepreneur extraordinaire Dr. Abdulmalek Al-Jaber at the Arabreneur angel pitching event in Jerusalem last Monday April 7th. The afternoon gathering, hosted at the Notre Dame Center, featured top talent from Palestine's startup community. The quality of the startups was matched by the beauty of the venue, an open-air rooftop overlooking East Jerusalem and the Dome of the Rock. As the sun set over the city, seven entrepreneurs pitched their startups to a crowd of angel investors, government officials, and venture capitalists. I was there to check out the investment opportunities for Oasis500, and here’s what I saw:

SooShef is a recipe engine that could either be its own stand-alone site or integrated into other recipe platforms. Instead of guiding users to make recipes based on what they want to eat, Sooshef helps them make recipes based on what ingredients they already have on hand. One thing they have going in their favor is that they already have a large database of content.
Blue Engine is a multi-lingual website builder for the Arab world. This is a competitive market space with several global players (and regional player Websity) but the team claims to have a more powerful solution that can build anything from a personal blog to a corporate website.
Jobreneur is a freelancer website that connects SMEs with job seekers in the MENA region. They’re focusing on tasks like graphic design, web design, and software development.
Fadfid is impressive because they have some good traction already. This web service connects therapists with patients via online therapy sessions. By bringing this traditionally offline experience online, Fadfid is helping people in the Arab world avoid the negative stigma that often accompanies psychotherapy.
IMAGRY is an image recognition platform that lets you use photos to search the web. Imagine taking a photo of a t-shirt you like and immediately being linked to the vendor’s website. Cool stuff.
MobiBox is developing mobile games specifically for the MENA region. Their flagship project, City of Mecca, aims to build an Arab and Muslim community around relevant settings and gameplay.
iSurface was the only hardware/software startup at Arabreneur. The product is a projector that turns any surface into a multi-touch surface. Imagine a Smart Board but less costly and more convenient.
After the last Arabreneur pitch event in November, four Palestinian startups - AidBits, Karaz, Fariqak, and LiveTop - walked away with a combined $440,000 USD investment.
These pitch events will be hosted on a quarterly basis, according to an Arabreneur press release. The organization has committed to investing in 12 companies during its first year.
In an email to Wamda, Arabreneur co-founder and Program Director Radi Fassed said that "several investors" have approached the program regarding co-investment in the new batch of startups. "We will hopefully announce the startups [selected for investment] in the coming weeks," he added.
English Managing Editor Stephanie d'Arc Taylor contributed to this post.