In the absence of local blogs, press coverage, groups or associations of web entrepreneurs, and, until recently, a coworking space, the Tunisian startup scene is particularly tough to understand if you’re not in the country.

So, in late February, I went to Tunisia to get an idea of what was really happening there. I discovered an extremely motivated community, ready to break free from the decades of enforced silence, and to take control of their country and lives.

Natural entrepreneurs forced into silence before the revolution

“Tunisians are born entrepreneurs,” said Houssem Aoudi, cofounder of TEDxCarthage and Cogite, the first Tunisian coworking space launched last September, about his fellow Tunisians. Yet, rare are those who have launched a company or made a name for themselves. It’s understandable: few countries have lived in an environment as repressive as Tunisia’s during the Ben Ali era. 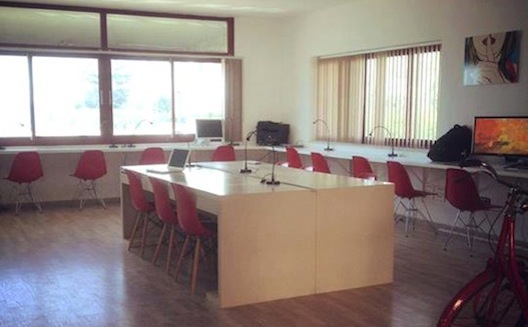 Before the revolution, several powerful families retained most of the power in the country. Their corruption and control of the economy represented the first major obstacle in the advancement of Tunisian entrepreneurs. These families also were able to force entrepreneurs to sell their companies for a fraction of their real value.

Out of fear of attracting unwanted attention, Tunisians “show what they have but not what they’ve done,” explains Aoudi.

If only this was the only hindrance. Starting up a company is also a nightmare; registering a company takes roughly 140 days, continues Aoudi, and banks only give loans to public employees and those who work for big private corporations. If a lucky entrepreneur does get a loan, they will be liable for life.

No surprise then that Tunisians would rather find a steady public job, and open a local store on the side (and in secret).

A community ready to break the silence and take control

Ever since the 2011 revolution, things have changed. “People realized they could do things, take control of their life,” believes Rym Baouendi, Aoudi’s Cogite cofounder.

The end of the Ben Ali era put to rest that fear of forced buyout, breaking the first barrier. 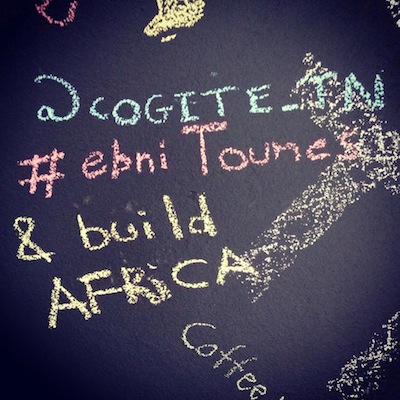 Many Tunisians decided to break the remaining barriers themselves, whether practical or psychological. Rym Baouendi, Houssem Aoudi, and Zied Mhirsi launched Cogite for that reason; they wanted to give an answer to each excuse Tunisian were giving to postpone creating a company, by providing them a coworking space and a network of entrepreneurs.

Success was quick; entrepreneurial Tunis residents quickly made the space theirs. After the first three months, during which people were only coming for the events organized by Cogite’s partners, they then began working there. And six months later, the company had already broken even, the bookshelves were full of books brought by the community, the wall covered with empowering message like the now famous #ebnisTounes (‘we build Tunisia’, in English), and the team is about to open a new space in downtown Tunis.

This is just one example. During my ten day stay in late February, three events took place: these were the TNWebDays, the Salon de l’entrepreneuriat, and an after-work Apéro Entrepreneurs hour (‘Entrepreneur’s Aperitif’ in English), a monthly meetup launched four months ago, which gathered 70 people during the first edition. Other community-driven events include the Café Carrefour, the Social Media Club (more on that later).

Still, one major hindrance remains: lack of funding. The venture capitalist funds SICAR (Sociétés d'Investissement de Capital À Risqué in French) are known for being risk adverse because banks manage them. Several Tunisians tried to invest as business angels in 2011 but faced many practical and administrative challenges. Thanks to their work with the Carthage Business Angels association, they now have legal status, but they still have to contend with immature startups. To combat this, the group created an accelerator called Univenture, and a consulting company called WikiStage to help companies grow.

Some organizations offer interest-free loans, and funding for startups they coach. These include Startup Factory, the accelerator funded by local telecom company Tunisiana, IMPACT, the incubator for social companies, and Réseau Entreprendre, or Microsoft Innovation Center (MIC). But these organizations only offer small tickets, and startups who benefit must also look for other funding.

An influx of international aid

The revolution changed the perceptions the international community had of this small country of no more than ten million. In just over a week, I met two different Europeans who had come to investigate the entrepreneurship scene; I also became aware of various organizations offering international aid, like the famous QFF (the Qatar Friendship Fund), and the GIZ (the German collaboration organization).

Even the many European entrepreneurs who have established themselves in Tunisia to cut costs are getting into the market. Some have managed to enter and make a name in the Tunisian entrepreneurship scene, like Charles Dusart, founder of eTâches, an online small tasks marketplace like Task Rabbit for the French market, who launched Apéro Entrepreneurs and is now a Wamda contributor.

In Aoudi’s opinion, the international funds will eventually leave, making it ever more important for local players to make the most of them now, and turn them into a sustainable entrepreneurial movement in Tunisia.

Now that Tunisians have taken the lead, it’s up to the government to follow them. Only the government will be able to ease the creation and funding process. Meanwhile, many interesting startups should be seeing the light in the coming months.