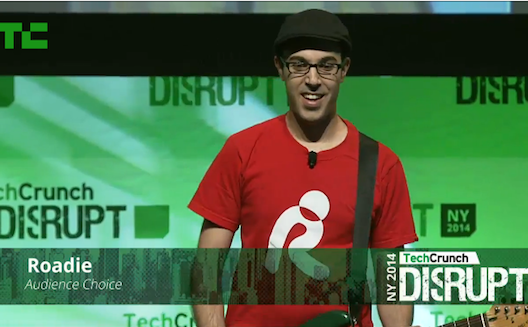 After attending a spur of the moment event earlier this year, the young entrepreneurs behind Roadie Tuner had no idea that they would hit it big in the Big Apple.

After winning first place at the TechCrunch Beirut MeetUp in March, Roadie Tuner, an automated guitar tuning hardware device, won a ticket to attend TechCrunch Disrupt NY where the Lebanese product also won Audience Choice. But success at one of the year’s biggest tech conference isn’t all they have to celebrate; luck has been on their side since they joined hardware accelerator Haxlr8r last year.

Musicians and engineers Bassam Jalgha, who plays the oud, and Hassane Slaibi, who plays the flute, have been developing the Roadie Tuner since Jalgha won Stars of Science in 2009. The product itself helps musicians tune their stringed instruments quickly and accurately. After perfecting the technology, and partner mobile app, at HAXLR8R in China, they hosted a very successful Kickstarter campaign that successfully raised nearly US $180 000, three times their goal.

It’s a dream scenario, one topped off by their success on the Disrupt stage, which brought them further into the spotlight of media, investors, and the interested public who participated via the livestreamed conference. “At disrupt I felt so much energy floating around and got inspired by some of the feedback we got on what our next steps should be, including the very valuable jury’s feedback when we pitched on stage,” says Slaibi who demoed Roadie at the conference.

After Slaibi’s pitch, during the question and answer portion of the judges panel, the young entrepreneur managed to convince the jury of the real potential of the tuner. One panelist, John Frankel of ff Venture Capital said, “It is such a niche market, your approach is so thoughtful and it is fascinating what you’ve done and where you want to take it.”

We caught up with Slaibi to learn more about the event and to see how he plans to scale Roadie Tuner in such a niche market:

How helpful do you think the conference will be in moving the product along?

Networking is a major part of any conference. I made sure to make the best of it and this will hopefully help unveil collaborations down the line.

The whole event was really inspiring. Just getting out there and checking out all those companies building amazing products really keeps startup adrenaline high.

How do you think the Audience Choice award will help your product?

Apart from the exposure that the Audience Choice award gave us, the award itself will be another stepping stone in building a trusted brand that is closely tied to cutting edge technology.

What specific tips can you give young entrepreneurs working on niche products?

The advice I would give to young entrepreneurs is to embrace the power of mentorship and feedback. It’s always good every once in a while to get out of your office or garage and seek feedback from people, whether potential customers or more seasoned mentors.

The team is currently manufacturing the tuner in time for a summer delivery for their Kickstarter backers. I for one look forward to testing it out.