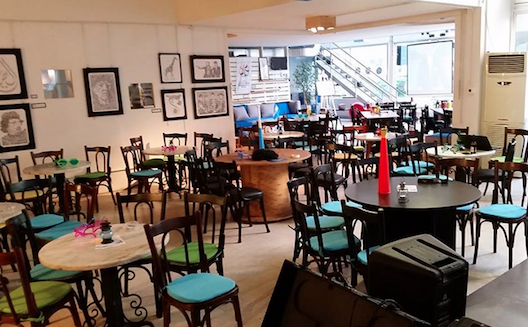 Stepping into the spacious offices of AltCity on Beirut’s bustling Hamra Street, the sense of keen minds working away, most likely at something they hope to be great someday, is palpable. It’s been three years now since the coworking space opened its doors; the space’s progression from a few rooms where people could rent desks, to a cafe, event venue, and a second floor due to open in the fall, is impressive.

Lebanon has seen it’s fair share of security concerns since 2011 and for AltCity, despite having to overcome the obstacles that these came with, such as funding being reduced or re-directed, the team has managed to keep the objective of becoming a key player in the Lebanese startup scene firmly at the forefront of their minds. From their beginnings as one of the country’s first coworking spaces, RootSpace, based on the other side of town, they have grown themselves to become a go-to location for anyone at the start of their entrepreneurial career.

Rather than specialize in one sector, the incubator initially accepted all kinds of projects, working on creating platforms for phone companies, gaming competitions, to hosting artists exhibitions, so as to serve the broadest base. “When we started we were more diverse when it came to the projects we took on,” says co-founder and current CEO Munir David Nabti. “This was very helpful for us to mobilize different funding in order to help us survive.” Not having money is of course an incentive to do a lot of things one might not necessarily want to do; AltCity found itself being very open.

Over the course of the last 18 months though, things have started to take shape and the team is finally at a point where they can be more selective. “We’ve been moving towards being more focused on startup training and startup development,” says Nabti. “We’ve been lucky in that as we’ve become more experienced and have created a stronger network, we’ve been able to focus more.”

Sitting in the cafe section of the AltCity premises, Nabti explains how the cafe is an example of the diverse ways they want to engage users of AltCity. “There are different levels of engagement,” says Nabti. As a business model, this is how AltCity operates – provide different services for different needs. Here this includes support meetings with the AltCity team; the ability to register the company and actually have AltCity as your business address; plus, help making contact with banks, lawyers and investors. Indeed, the cafe is quiet enough to be suitable as a work place but not so quiet that you think you’ve entered a library. One can hire a locker, or just a desk, or even an entire office, on a monthly, part-time, or full-time basis, depending on what’s required. Nabti reckons around 10,000 people have passed through their doors to date; these have included artists, small businesses, startups, journalists, and entrepreneurs.

Getting to work. Image courtesy of AltCity.

These permanent elements of the space though are actually not what provides the most revenue. The café and the coworking space, according to Nabti, are not very lucrative as revenue sources. Rather, the many events and now the projects involving startups, are what is bringing home the bread. However, for Nabti, AltCity’s value is its relationships with the wider community. “We feel like the coworking element has also been valuable to us in terms of offering support to startups.”

The earlier stage of the start up process is something that AltCity really wants to focus on, and be there for the start up until they have demonstrated that they’re viable, that there’s a prototype, that there are users and there is growth potential - making AltCity a strategic player in startup acquisition pathways, or substantial downstream investment. Being able to pass these then on to the next stage of support, whether in Lebanon or abroad, is where Nabti wants his team to be. “We want to focus on building compelling and strong and profitable startups,” he says, “and that is where we would have a greater return on our investments.” As Nabti told Wamda before, the ultimate goal is to put Lebanon and its growing entrepreneurial and startup scene on the international map, and cafes and second floors are all part of that plan.