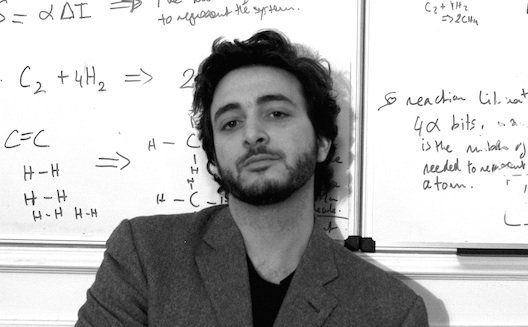 When Rand Hindi was included in this year’s MIT 35 Innovators Under 35 list, no one was surprised. This Lebanese, who moved to France when he was just a kid, started his first business at age 14, and started his PhD at 21, has won over Paris.

Following his nomination, we decided it was high time we share his unusual journey with our readers, and catch up on the pivot his big data startup Snips is going through. The entrepreneur invited me to join his team for a hackathon at his apartment, to finish up the prototype of their new product for the MIT 35 Innovators Under 35 awards ceremony on September 22. “We don’t do [our hackathons] at work, because we want to get out of that work mindset,” explains the CEO.

A quick look at the team having lunch is enough to be convinced that team spirit and quality of life are, indeed, a priority to the startup. The ten scientists that make up the team live and breathe Snips; Rand even wears Snips sneakers. They are Adidas, with orange strips – the color of the company – with the logo embroidered.

To understand Snips, and Hindi, you have to rewind back to 2008. Hindi, a bio-technologies student interested in data and quantified self, decided to look for a solution to quit smoking without gaining weight. As he started paying attention to diets, he came to the conclusion that “diets are bullshit.” None of the thousands of existing diets work for everyone, so every person should have a particular diet that works for them. That’s when he decided to develop an algorithm that would enable anyone to find their own specialized diet by simply using data from their daily life.

“I absolutely had to test it on myself,” he says, “and for that I had to become fat.” For two years and a half, the student did everything to gain weight, while, at the same time, entering as much information as possible about his life in an Excel sheet, including what he ate, when he went to bed, when he ate, when he went to a night club, and what was going on with him emotionally. At the end of those two years and a half, Hindi was 35 kilos heavier, but managed, with a bit of data mining, to spot patterns. After eliminating from his diet foods that were systematically bad for him, his body went back to its natural weight in two years’ time.

But, in 2011, when Hindi decided to turn his algorithm into a product, the product didn’t get off the ground, because, Hindi speculates, the market wasn’t yet ready for a diet that didn’t come from a doctor. Now, however, with the wearables boom, Fitbit and the others, he thinks it would be a different story.

Not one to give up, the French-Lebanese decided to use his big data experience to solve problems in another sector: urbanism. He met Michael Fester and Maël Primet, two mathematicians, and the three PhDs decided to create a company together with a sole goal: solve problems using big data.

Snips is one of the latter. Working on what interested them, they ended up developing technology that was attractive to corporations with an industrial product. The startup started to custom design products for a parking operator, a railway company, and more, becoming a B2B company. One of the company’s creations was an app that allows any train users to know which car has available seats, and when the train will be busiest.

“We loved what we were doing, we were making good money, it was great,” recalls the entrepreneur. But big companies’ sales cycle were too long, their product wasn’t easily duplicable, and therefore difficult to scale. Most of all, “this wasn’t what we wanted to in the long run,” recaps Rand. So the team took an unusual decision: “we said ‘we’re going to stop making money, and focus on a product we have no idea is going to work out’.”

The team came up with the Snips app, which Hindi calls a ‘pocket brain’. He explains: “our app tracks a whole lot of data [based on what a person is doing, and its environment], and is therefore able to understand the context the user is in, to suggest the right information, and suggest different apps [the user might find useful]. It’s ultra personalized big data. The more you use the app, the more the app learns.”

The idea came from a simple observation: people have too many apps to remember which one to open when, and they lose a crazy amount of time entering information into their various personal tracking apps. “It’s like the internet before search engines, when all there was were directories,” he explains, “there’s a better way to interact with our devices.”

With Snips, all the user would have to do to find the app they need is open the Snips; when they open it, the app already has all the information it needs. 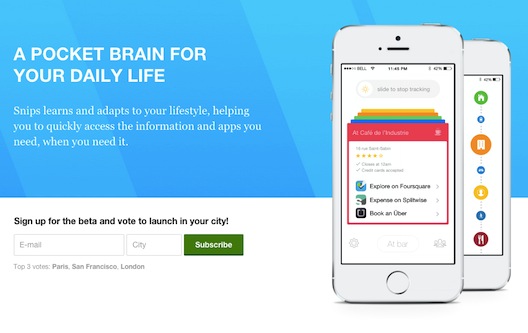 The most obvious competition are Google Now and Aviate, a startup Yahoo! recently bought, but Hindi made his opinion clear: “Google Now doesn’t work, it’s not smart enough, never displays the information you need first, and only works with Google products.” As for Aviate, he says it doesn’t have context intelligence.

That’s where Snips is different. The app will work with a large selection of apps, and could, in the long term, identify the utility of any app, and integrate it into its system. The pocket brain will also have a unique user experience that would make it easier to get the right information. Instead of showing information in a sequential order, like Google Now, Snips will feature the information in cards stored in a stack, with a color for each type of activities.

The app should make it to the App Store by January, also when the team would like to announce a fundraising round. Hindi’s 35 Innovators Under 35 honor should help convince investors and open some doors.

Hats off to Lebanese entrepreneurs

Like with most entrepreneurs, there aren’t enough hours in the day for the French-Lebanese. It’s been a few years now that Hindi hasn’t been back to Lebanon. “I have many Lebanese friends who are entrepreneurs. They must be among the most fearless entrepreneurs that exist. Honestly, hats off,” he says with an obvious admiration.

“I’d like to help one day, but for now, I just don’t have the time,” he says. In the meantime, you can hear him share his knowledge at Paris accelerator Startup42 (managed by another French-Lebanese), or MENA tech events in Paris, such as the dinner organized by MITEF in Paris last year during LeWeb.