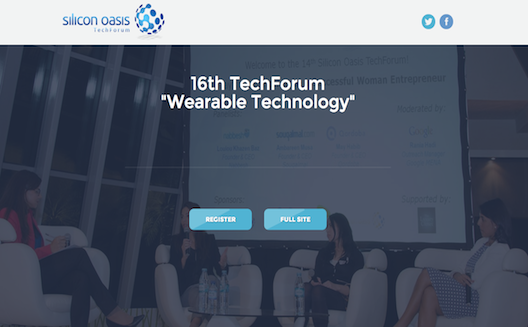 Organizers of the 16th TechForum, held on September 16 at Dubai Silicon Oasis in partnership with the Emirati telecom Etisalat, wanted the answer to only one question: “How are wearables affecting society?”

Wearables occupy an important place in the technology sector today, with global sales expected to grow from $15 million USD in 2013 to $70 million USD in 2017, according to Juniper Research, sure to be boosted by the launch of Apple’s smart watch next year. Companies are trying to cope with the growing phenomenon, as well as introduce the latest technologies, and find new ways to attract users.

TechForum addressed the use of wearables as catalysts for positive change and included a virtual tour to unveil the benefits of such technologies on society.

Martin Molnar, CEO of Dubai-based Tupelo, told us that the goal of his company is to rely on research more than technology to improve the lives of the users of wearables. “We don’t just want to offer a modern device, but rather a device that makes your life better,” he said.

Molnar pointed out that recent studies reveal that obesity is reaching epidemic levels and costing governments millions of dollars. He also pointed out heart disease as one of the leading causes of death in the Arab world. Because most of the studies and research funds are allocated for the United States, Tupelo decided to base itself in Dubai so as to better target the currently underserved Arab market.

Tupelo offers its users three wearables so far: Mymo, MyBalance, and MyBeat, each of which has a distinct set of features, and is linked to apps available for both iOS and Android for access to all the fitness data.

However, Molnar believes that the interest of users in these devices does not always last, even if the goal is good health. He reported that 80% of users in the United States neglect their devices, while 85% of Middle Eastern users forget all about them after a few weeks of fascination with their new toy.

Tupelo wants to distinguish itself from other companies by monetizing the project on one hand, rather than accepting research grants, and ensuring sustainable participation from users on another. Molnar believes that the best solution is a reward system, like the one the company uses with its Mymo, by which users collect points as they participate in physical activity, which they can redeem for rewards. 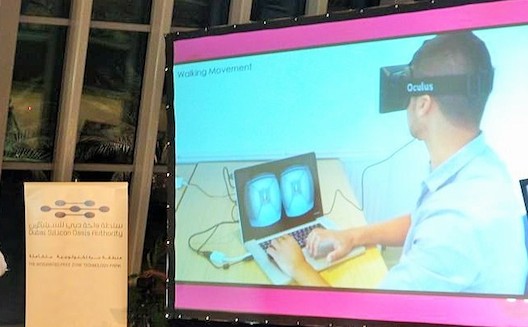 The British Clicks and Links chose TechForum to take the audience on a virtual tour of its latest wearables. Vin Sumner, Clicks and Links’ managing director, said that the event is a chance to test out Oculus, a device acquired by Facebook earlier this year. He believes that the acquisition helped pave the way for more innovation in virtual technology. The company’s newest product, Rift, a virtual reality headset, allows developers to build apps that enable players to ‘enter’ the world of their favorite games. The device will be available as of the second quarter of 2015 with global sales expected to hit at least 1 million devices.

Sumner says that virtual reality has witnessed significant development in the last 20 years, both in terms of technology and design, especially that new interfaces and means are now available to interact with virtual reality, such as Leap Motion, Myo, and Kinect 2, i.e. devices that rely on movement.

Virtual reality has changed the equation in the gaming industry, but it also stands to play an increasingly important role in daily life. It can be used, according to Sumner, in medical and military training as well as in hazardous environments, or for simulations for disaster planning, civil planning, or even tourism.

There is no doubt that new device innovations will lure more people to the world of wearables. However, the potential for the industry does not rely on technology alone, but also on consumer demand, which will require significant time and money.