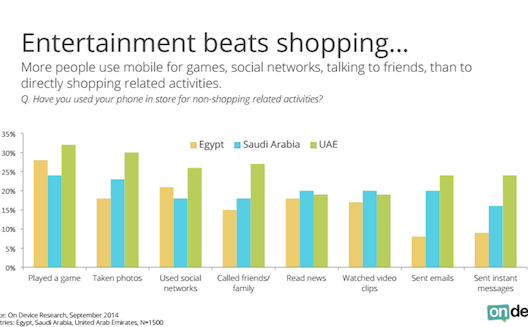 Shoppers and retailers in the MENA region have long known that consumers have been spending more and more money online. What is new, though, is how shoppers are using the internet even while offline shopping. According to recent findings, 90% of shoppers with access to mobile internet in Saudi Arabia and the UAE, and 60% in Egypt, rely on mobile browsing “to check prices and product reviews” as they stroll through the mall.

The finding, reported by On Device Research, was published in a report entitled Super malls & market stalls: How mobile is influencing shopping in MENA. The report went on to claim that of the 90% who did price comparison on their mobile phones while shopping at malls or in stores, fully 74% “stopped a purchase as a result.”

The claim carries important implications. First, that “transparency is the new norm.” Consumers now have the power to price-check most items in stores against competing brick-and-mortar retailers and those that operate online. The research also suggests that opportunities for in-store advertising abound for retailers who want to understand consumer behavior.

Researchers compiled the data from 1500 respondents across three countries – Egypt, Saudi Arabia, and the UAE – last month. While the three countries are undoubtedly important, they fail to offer a full view of the purchasing and mobile activities of people across the MENA region, as the title suggests. We can hope that future editions will offer a more comprehensive look at behaviors across the region, rather than in just the regional poles of development. 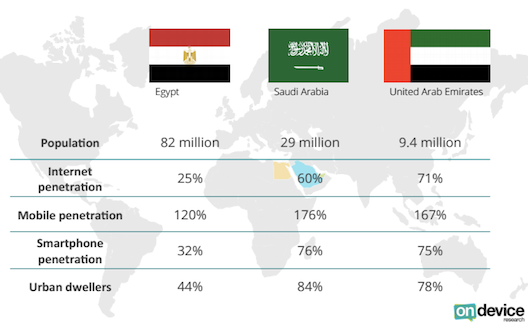 Despite the many differences between lifestyles in Saudi and the UAE on the one hand, and Egypt on the other, data showed that smartphone behavior in the three countries is similar, despite lower smartphone adoption rates, data speeds, and income levels in Egypt. When perusing stores at brick-and-mortar retailers, Egyptians most often called friends or family for advice; the nextmost common behavior there was using the phone to check prices, followed by taking photos to send to friends and family (a variation on the “call friends and family” behavior).

The most common behavior among shoppers with smartphones in the UAE was taking photos. Second, users would call friends and family and check prices.

Perhaps the most actionable piece of information in the report is the finding that shoppers use their phones to entertain themselves while shopping – which begs the question of whether shopping is regarded as boring or not enjoyable by survey respondents. More research on that question may yield new insights into where best to allocate one’s mobile advertising dollars.

Download the attached document to read the full report.