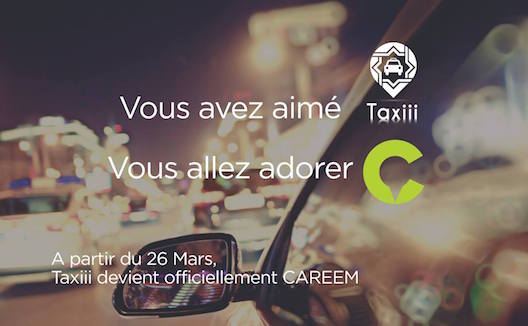 Back in January, we were talking about how taxi apps made their entrance in Morocco, and were to become the hot market in the kingdom. Two months later and we have confirmation of the fact.

“Taxiii was looking for funds to develop its technology, and its marketing,” explains Taxiii’s CEO Yassir El Ismaili El Idrissi to Wamda. He also says that Morocco was a priority for Careem. This acquisition is therefore the result of “two organizations meeting at the right time, with complementary interests and similar values,” he insists.

Taxiii's team and CEO will be joining Careem's 70 strong staff.

“Customers can choose to settle their fares via a registered credit card should they wish, with the option to pay cash still supported,” explains Selim Turki, head of new products at Careem.

For Yassir El Ismaili, “joining our local presence and community to Careem’s awesome technology and operational excellence will with no doubt make Careem Morocco a service both customers and  drivers will love and recommend.” While we’re still waiting to see if Uber will enter the Moroccan market,  Careem Maroc only has two major competitors, iTaxi and VotreChauffeur.ma who have neither Careem’s experience nor budget.

The new service will be launched in Casablanca at TEDxCasablanca later this month (26th); followed by a launch in Rabat (30th).

Since it was created in 2012 in Dubai, Careem has expanded to Abu Dhabi, Manama, Beirut, Cairo, Dammam, Dhahran, Doha, Jeddah, Karachi, Khobar, Kuwait, Lahore and Riyadh. Until this point they have been growing internally, making this their first expansion through an acquisition. Could this be the beginning of a new growth strategy?

This is Careem’s second acquisition. In January the startup acquired Enwani, a home delivery service. “You will see us covering the rest of the region and launching new services on top of the core passenger transport platform,” added Careem’s Director of Brand & Communications Gemma McKeown.