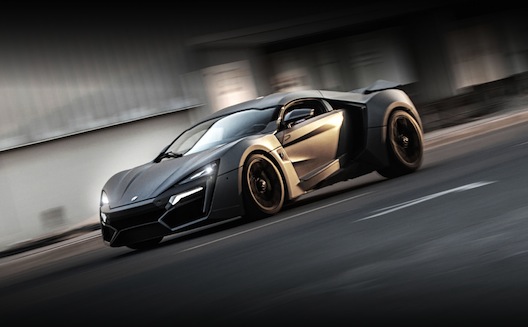 “This time it ain’t just about being fast,” growls Vin Diesel in the newly released, box office record breaking, seventh installment of the Fast & Furious film franchise. He’s presumably talking about whatever hijinks our gang of lovable reckless drivers is up to this time, but the sentiment also applies to the Lykan HyperSport, the $3.4 million ‘supercar’ featured prominently in one of the film’s most exciting scenes – the first such car to be designed in the Middle East by the Lebanese company W Motors.

Here’s the trailer for the film, which features Vin Diesel crashing the HyperSport from one Abu Dhabi skyscraper to another while dodging RPGs shot by English baddie Jason Statham.

“Arabs can build a better car than anyone”

The HyperSport – of which there are just seven in the world – features a twin turbo flat-six 3.7 liter engine with 780 horsepower and a maximum speed of 239 miles per hour. Each LED headlight features 220 diamonds and 100 sapphires. Inside the car, there’s a one-of-a-kind floating holographic display with gesture recognition and tactile interaction. “You can feel in mid-air what you’re clicking,” marvels Ralph Debbas, CEO of W Motors, over Skype. As if that weren’t enough, there is a diamond coating on top of the paint, making it scratch proof.

But, says Debbas, “the hardest job for W Motors was not building the car – which was of course very difficult – instead it was how to get credibility [as a supercar manufacturer] coming from the Middle East.” Building this credibility is a long-term goal for Debbas and his company.

Cars have been a passion for the entrepreneur “ever since I was a kid.” He took that passion to the UK, studying locomotive engineering, then auto design at the master’s level. He returned to Lebanon with a mission: “I wanted to prove that Arabs can build a better car than anyone.”

Reaching beyond the MENA

With this attitude, some English car junkie colleagues on board, initial income from an automotive design consultancy in Lebanon (and more financial support from his father), Debbas began making calls to his dream partners. First up was Magna Steyr, the Austrian car manufacturer. “I can’t say that I was smart,” Debbas laughs. “I was lucky, in the right place at the right time. I just called the company, said ‘I have an idea, I’m ready to pay for it, can we meet?’ I was on the plane the next day.”

Manufacturing the car of his dreams in the region was out of the question, Debbas says. As of 2013, Egypt was the only MENA country to rank on an International Organization of Motor Vehicle Manufacturer’s list of countries with active automotive production industries – and that number was decreasing at an alarming 30.9 percent. Further, the kind of car Debbas envisioned wasn’t one that could be mass-produced in an Egyptian factory. “We [in the region] don’t have the infrastructure to build such a car,” he candidly admits.

Because of this – and the fact that the best automotive technologists aren’t located in any one region – the car itself is a kind of gilded Frankenstein’s monster: W Motors “started in Lebanon [in 2008], launched in Qatar, then moved to Dubai; the engines are made in Germany, the factory is in Italy, and the holograph technology is from Japan,” he says. 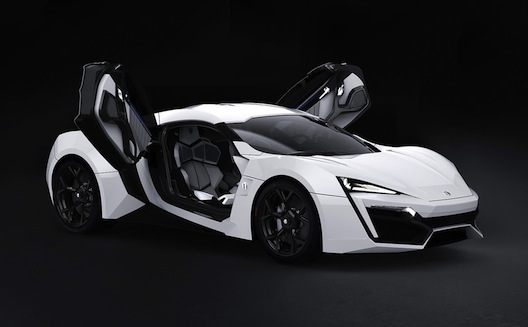 One day in 2013, Universal Studios contacted the studio’s Dubai office. “It was like a dream,” Debbas reflects. “We didn’t even know which movie they wanted the car for.” After a visit to the factory showroom, the producers placed an order for 10 cars.

But even Universal isn’t wealthy enough to destroy 10 multimillion dollar sports cars. “The cars we built for them had the exact same interiors, engines, but with different power trains for stunts,” Debbas clarifies – no diamonds were destroyed in the making of Furious 7. “There was one survivor,” he says. “It’s a red one and it’s totaled, but I keep it as proof that the film actually happened.”

Dubai as a supercar manufacturing hub?

Recognizing Lebanon’s relative instability in comparison to the UAE, and the fact that there were simply more people in the Gulf who would be able to consider spending millions of dollars on a car, Debbas moved his company to Dubai shortly after launch. Now, he believes Dubai to be the ideal place to create an Arab luxury automotive manufacturer.

“This was the plan all along,” he says. “We’ll still have our suppliers [all over the world], but by next year we’re planning on creating a hub in Dubai to build supercars by bringing our expertize and experts to the Emirates.” In the works are an assembly line, the capacity to develop in-house technology, then full A-Z production, launching new models, and finally the first automotive design school in the MENA.

“We’re based in an Arab country and I’m an Arab,” Debbas says. “It’s time to bring everything back to Dubai.”