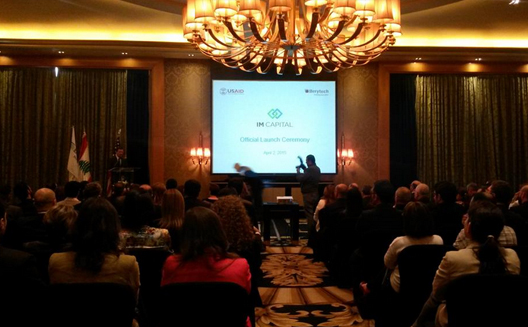 Last week, representatives of USAID, the Berytech Foundation (a Lebanese incubator and VC fund), and the United States government announced the launch of a $15 million five-year program to support entrepreneurship in Lebanon as part of the MENA Investment Initiative (MENA-II). Accelerators, investors (both angel investors and venture capital firms), and early stage businesses are eligible for support from the new scheme.

Insure & Match Capital (IM Capital), a subsidiary of Berytech, has been launched to manage the $15 million, to be doled out over the first five years of the 20-year program. The money will be distributed along three channels, explained IM Capital General Manager Nicolas Rouhana, at Thursday’s Beirut press conference: matching capital, equity guarantee, and technical assistance.

1)   Matching capital: IM Capital will match “up to 50%” of new outside private sector investment capital.

2)   Equity guarantee: IM Capital will provide partial guarantees for investors in early stage businesses. “This is the innovative part of the package,” Rouhana said. “We owe thanks to Kafalat for letting us use their model.”

As for when the initiative will begin operating, “we’re ready to start signing checks now,” Rouhana laughed.

The MENA-II initiative draws on $225 million allocated to USAID to help “spur economic growth” in the region, among other things, according to the USAID website. More specifically, the investment initiative will aim to “create jobs in the region and spur private investment, by targeting startups and early stage businesses that struggle to access financing… the MENA-II will leverage US funding to catalyze resources from other [investors].” The initiative will allocate funds to other regional countries, including Jordan.

Some in the audience were cautious. During the questions portion of the conference, Mohammad Ibrahim Fheili of Jammal Trust Bank asked which key performance indicators will be used to track the progress of the initiative. In an interview later, he elaborated on his concerns: this kind of funding scheme requires significant technical expertise to make the right decisions pertaining to risk management, he said. The matching capital and equity guarantee clauses, he claims, will make startups and investors both more prone to making risky decisions.

A few days later, Wamda caught up with Berytech president Maroun Chammas, who took exception to Fheili's comments. "Fheili said that the matching capital and equity clauses will encourage risk - it's the opposite. When a private investor is investing in a venture, it's his own money. If he doesn't feel that a business will be successful, he won't invest."

Many in the entrepreneurship community might counter that risky decisions are important, if not crucial, to the success of any venture. Chammas concurred: "there's risk in any venture, but it's a calculated risk. We know that, and when people invest, they know that. To reduce the risk by either matching capital or giving equity, this is novel - it's similar to what Kafalat does, but on an equity basis."

Rouhana added later: “The IM Capital components will incentivize private sector investment capital into the early-stage business ecosystem; the equity guarantee scheme is a novelty in this space, and will contribute to mitigate the risk of investing in early-stage businesses.”

Chammas went on: "As IM Capital we have the right to match or not to match - we're going to do our own due diligence. If we feel that it's a high risk and not appropriate, the investment committee, composed of bankers and people with experience with VCs can reject the option to match investment."

Finally, Chammas said, "Berytech had to go through a very strict process to get the deal with USAID, a lot of things checked out in our organization and how we work. Based on that USAID thought that we as organization had the technical skills and the ability to carry this out." 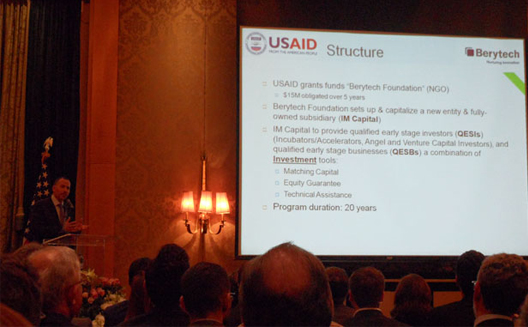 New opportunities from the private sector

The news of the USAID cash injection comes amidst a landscape of ever-increasing support for Lebanese startups.

So far this year, several firms both regional and global have announced or officially launched funds available for Lebanese startups. These include Lebanon-based LEAP Ventures’ $71 million fund, Lebanon’s iSME’s $30 million World Bank-sponsored fund, MEVP’s $70 million IMPACT fund (also based in Lebanon), a projected $50 million fund from the Singapore-based Hatcher company, and others.

In addition, several regional support organizations have announced their plans to open Beirut-based institutions. Flat6Labs will launch its fourth regional accelerator next year in Beirut, UK ambassador Tom Fletcher announced plans for a joint UK-Lebanese government-sponsored tech hub, and the World Bank in concert with the Lebanese government will launch an NGO to support young people in launching tech startups.

As far as the public sector goes, there are two initiatives, both supported by Lebanon’s central bank (Banque du Liban), currently in operation to help SMEs and startups get early stage investment.

Circular 331 is a scheme through which the BDL gives banks investing in startups seven years of interest free credit, which can be invested in treasury bonds with an interest rate set by BDL. Further, the BDL guarantees up to 75% of the value of the investment, meaning that the bank only risks losing 25% of any investment in a startup. If the investment leads to a gain in revenues, the investor bank splits the profits 50/50 with the BDL. The first investment through the Circular 331 was in June of 2014, when Al-Mawarid Bank invested in Lebanese startup Presella, but mostly banks are putting money into funds like LEAP Ventures and MEVP who know better how to invest in startups.

Kafalat has been in operation since 1999, and was launched as an initiative of the Lebanese government, the Association of Banks, BDL, and the National Institute for the Guarantee of Deposits. The scheme allows SMEs and startups to take out loans from commercial banks (assuming the bank approves the company’s business plan). Kafalat has also created an incentive for banks to lend by guaranteeing a significant portion (75-90%) of the bank’s loan for up to $400,000. Due to the increased guarantee, the Kafalat makes it easier for banks to invest directly in startups, rather than having to use funds as middlemen.