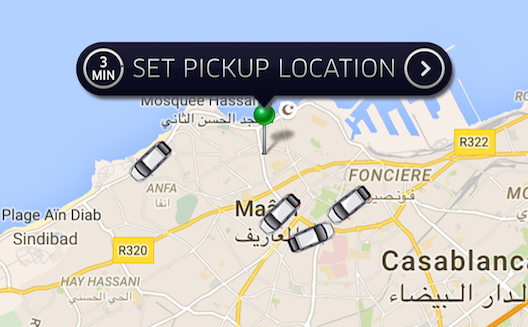 This article was updated July 22 to reflect additional information.

Anyone looking at Uber’s app Tuesday morning would have seen just a few cars in downtown Casablanca. After months of rumors, Uber is now in the white city.

Although Uber had just a few cars on the road. Meryem Belqziz, Uber’s general manager in Morocco, insists the company’s modest start in Morocco is by design. 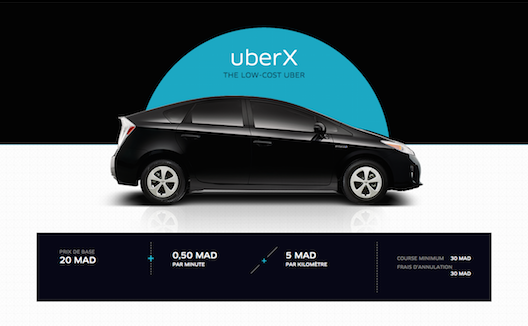 This calibration phase is much needed, according to some. In an HuffPost Maghreb article, users reported that they waited more than one hour for the car to arrive and were billed much more than estimated at the time of booking.

For now, Casablanca residents will only be offered the UberX service. In Morocco, this service will let users order private professional drivers in 4x4-type cars for an immediate trip. Users don’t need to pull their wallet out since their credit card is already saved in the system.

“We worked intensively […] to allow Moroccan users to pay with Moroccan credit cards - AttijariWafaBank, Banque Populaire, and BMCE for now,” she said. “We will offer the same user experience as in the rest of the world,” she added.

To do so, Uber has implemented a functionality that the Centre Monétique Interbancaire, CMI, which is entitled by the banks to regulate payment systems in Morocco, is not yet offering to other companies.

Uber’s main competitor in the MENA region, Careem, which recently acquired Moroccan Taxiii, has opted for a different strategy.

“We’re a regional player,” says Yassir El Ismaili, Careem’s manager in Morocco. "We have designed a product perfectly adapted to the needs of people in countries like Morocco. For example, we offer the unique possibility to pay cash or with credit card, to order via the application, on the web or through a call center, and finally to book in advance or immediately. Apps designed in the US or Europe don’t add those kind of functionalities.” 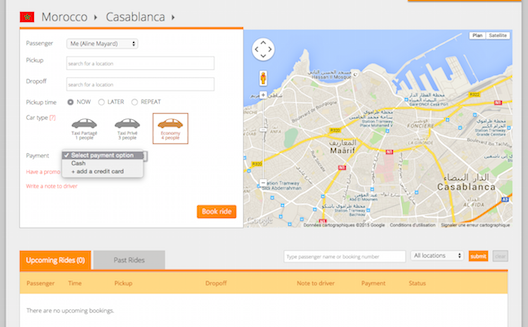 Careem let users your book online and pay with cash

Will that be enough to beat the American giant?

“We have a strong brand, and we can invest heavily in Uber’s development in Morocco,” Belqziz said.

The company hasn’t planned an ad campaign but is finalizing partnerships to get the word out.

“We don’t have names yet, but they should be inked with telcos, banks, restaurants, and airlines,” she added. “Uber can also rely on its already existing pool of foreign users.”

Will we see a merciless war between Uber and its competitors? Apparently not.

“Uber’s launch will accelerate the market’s education and increase the use of smart transportation,” iTaxi’s cofounder Tayeb Sbihi said to Wamda. “We are on two different segments. Our service is simple and clear: city ‘petit taxi’. Uber will offer a premium transportation service.”

iTaxi’s service, which is quite popular in the capital, offers far more cars than the competition. But it's unclear for now whether their users are the same ones that Uber's seeing the difference in price and comfort.

“This is excellent news,” El Ismaili added. “We’re now several to promote a new urban mobility and, seeing the size of the market, there’s room for everyone.”

Careem operates on the same segment as iTaxi and Uber. They offer to book “petit taxis” - shared or private, or “economy”, premium cars that operate by tourism transportation laws. They will soon launch a business service.

For now, Careem has fewer cars on the road than  iTaxi and Uber, as only eight “petits taxis” and one economy car were available at the time of publishing.

Conflicts between taxi drivers and the administration, which we’ve seen in many countries Uber has launched in, are not anticipated.

“We’re completely in line with the legislation and don’t foresee any sticking points,” Belqziz said, noting that Uber is working with tourism transportation companies.

Still, "repeating that you're abiding by the rules doesn't change the reality," writes blogger Marie-Aude Koiransky in O Maroc. According to Koiransky, Uber works with tourist transportation companies while catering to young locals with local credit cards - not tourists - and doesn't respect the rules imposed on this type of transportation.

Uber is only available in Casablanca for now, but expects to expand to Rabat, where Careem is already available, Marrakech and Tangiers, and possibly a few other cities by the first quarter of 2016.

By then, we will know if there is indeed a market for Uber in a city where taxis are usually not hard to find and where only a small group of residents have credit cards and can afford to pay double if only to get a more comfortable ride.