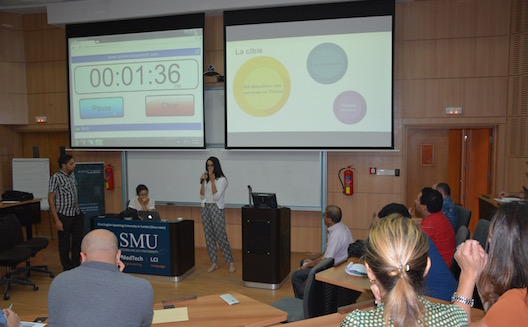 The recent terrorist attack in Sousse compelled Tunisian entrepreneurs to try to find solutions. Here, a team is pitching a rehabilitation/de-radicalization center. (Images via Christine Petré)

About fifty innovative Tunisians gathered on Monday in a suburb of Tunis to try to come up with smart ways to combat terrorism.

The eight teams participating in Entrepreneurship against terrorism were motivated by last month’s terrorist assault, where a gunman attacked a hotel just north of Sousse and killed more than 35 people.

The event, a product of the Tunisian entrepreneurship scene, was hosted at the Mediterranean School of Business. It brought together twelve partners including Apero Entrepreneurs, Cogite Coworking Space and Lab’ess, to give the teams an opportunity to bring to life innovative projects that help combat terrorism.

According to Leila Farhani, one of the organizers, the idea was to do something soon after the attack that would make people think of innovative solutions to get Tunisia through this period.

“Innovation is a team sport,” said Noômen Lahimer, who kicked off the event.

Indeed, nearly 50 people from backgrounds ranging from engineering to art answered the call. They were divided into teams of five to six people and were given lessons in leadership by civil society and human rights advocate Khedija Moalla.

“Where was the family, the university, the neighbors, the friends- where were we?” she asked, referring to Seifeddine Rezgui, the young perpetrator of the Sousse attack. 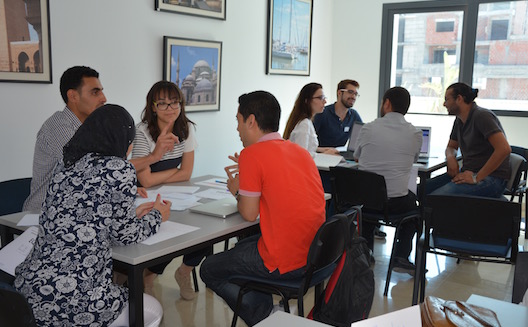 It will take a lot of creative thinking and hard work to eliminate the scourge of terrorism.

Participants had three hours to identify a problem. These included the need for education reform, the lack of quality communication, better media and high unemployment.

“We are looking for ideas that are realistic to implement successfully in Tunisian society,” Lahimer said.

Program participants then tried to come up with solutions. “Don’t block your creativity with old habits of thinking, quick judgments or lack of creative confidence,” Lahimer said.

Were the proposals realistic?

After coming up with a list of potential solutions, participants examined and evaluated each one critically: solutions need to be logical, and implementation needs to be realistic.

“When it comes to terrorism most people think security,” explains Lahimer.

Is there a different way to combat terrorism?

“Entrepreneurship is a way to think outside the box,” she said. “It has been difficult to choose just one root factor and focus on that one.”

After an Iftar dinner break, participants presented their solutions in three minute pitches to a jury that included the Cogite coworking space cofounders Houssem Aoudi and Rym Baouendi.

Most of the ideas focused on the fields of culture and education. Here are the proposed initiatives:

The winning proposal was by a team of entrepreneurs who wanted to improve confidence between citizens and the government by making it easier for the average person to communicate with the government.

Their application, I-Act, lets citizens inform the state of any anomalies they observe, anomalies that they might feel too intimidated to report over the phone.

Is a speaker at a mosque inciting violence? Users can report the offense and location with one easy click, and the ministry of the interior can then inform local police.

But can one day’s work yield meaningful solutions?

“This is just the beginning,” Farhani said. “The aim is to have a follow up event in the autumn.”