A consortium of international investors has taken an 85 percent stake in Egyptian electronic bill presentment and payment platform Fawry for $100 million. 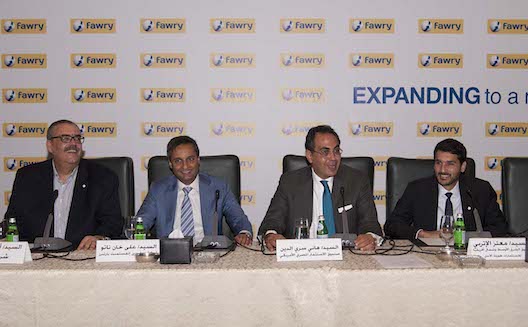 Fawry CEO Ashraf Sabry (far left) and representatives of the consortium of investors announce the investment at a press conference. (Image via Eman Mostafa)

Helios now owns the lion’s share of the company by acquiring 40 percent, followed by MENA LTV with 25 percent, and EAEF with 20 percent.

The International Finance Corporation (IFC) acquired 18 percent of Fawry’s shares at the beginning of 2013, which was followed by another investment by EME International, who did not disclose the stake they took in the company.

IFC now owns only 5 percent of Fawry, and 10 percent is owned by Fawry’s management.

The arrival of new investors would not affect the company’s management structure, he added.

Today, more than 1.3 million payment transactions are performed daily on Fawry with 50,000 distributors over more than 300 cities and districts all over Egypt.

Fawry is well positioned to expand in Egypt and North Africa, Sabry said, but declined to name where.

The company is also considering a collaboration with the Egyptian government to digitize its processes, but only “after achieving a somewhat satisfactory success in launching the epayment of electricity bills and other fines and taxes, taking into consideration that expanding our mobile billing services is still on the top of our priorities,” Sabry said. “We’d like to reach all of Egypt with it.”

What should startups look for in investors?

The criteria with which investors select startups  to invest in are as important as those used by the startups when deciding which investments accept, according to Sabry.

“The most important thing to look for in investors is that they should have experience in investing in similar markets, with similar economic and social conditions,” Sabry said. “This way, they they can understand the challenges that await their investment. This is in addition to their having lots of patience, so they can make their intended profit.”

And what do investors look for in startups?

“What most attracts investors to startups is their ability to grow and progress, and their ability to scale up to five times in a duration of 10 years,” said Alykhan Nathoo of Helios Investment Partners.

“Also, at Helios, two additional factors that are very important to us,” he continued. “The first is the team, and the other is the startup’s ability to deliver efficient solutions to economic problem.”

Helios has a record of investments all over the African market, including Kenya and Nigeria. “I don’t think our investments in Egypt will be limited to Fawry, because we see huge opportunities of startup growth in this vast market - provided they have the needed funding and mentorship.”

Fawry’s announcement is but the latest in a series of investments in Egypt in the last three months.

In October, ecommerce comparison site Yaoota raised a $2.7 million series A round, with the majority of shares acquired by UAE-based KBBO and earlier job-matching platform Wuzzuf raised $1.7 million series A, led by Vostok New Ventures and Piton Capital.

Last but not least was the announcement of Careem’s $60 million series C round, led by The Abraaj Group.