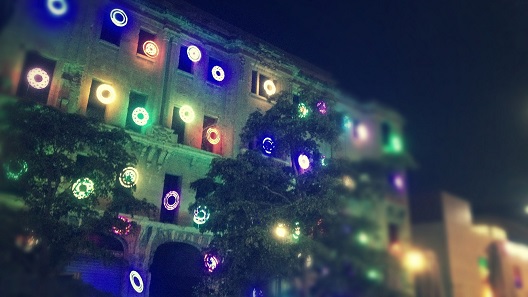 Startups might be more than beautiful glimmers of hope. (Images via Jonas Feller)

The Arab world is leaping ahead.

Governance is becoming less centralized, regional economic cooperation is increasing amidst a move from oil to science. Institutions are becoming more inclusive, identities are being shaped by universal values rather than sectarian affiliations. The reconstruction of Syria and Iraq will open up exciting opportunities. Significant parts of the Arab diaspora are considering returning to their homelands. Education, science and technology are flourishing as the young societies offer their citizens opportunities to research, debate and create.

This is a scenario, and the fact that it doesn’t seem to be the most likely one at present doesn’t mean too much.

The current challenges encompass economic, political and societal problems that are interlinked and were captured in the popular slogans of the failed uprisings 2010/11.

To name but a few sobering world records held by MENA: it has the highest youth unemployment and the highest government share of GDP, it's the least free region in the world, and exhibits stagnant and underdeveloped inter-regional trade coupled with a historical brain drain.

The region's economies share a pattern of “unearned revenue streams” – whether they stem from remittances, foreign aid or oil and gas.

Governments - monarchies and republics alike - have few peers in terms of longevity of their rulers and are struggling to provide any vision for the future of the region. Corruption, inequality and certain policies fuel a vicious cycle of brain drain (educated people leaving the region) and fascism (frustrated people embracing the ideology of Daesh).

Past: “A bad system will beat a good person every time”

Two prevalent explanations for the economic and political stagnation tend to blame Arabs (citing culture and religion) or the West (citing colonialism and continuing interference).

Both approaches yielded interesting insights yet fail to offer a satisfying comprehensive explanation of the current state of affairs: if culture was to blame, why did the region thrive in the past as a hub of science and commerce? If colonialism was to blame, why did virtually every other region emerge stronger after the decolonization wave (espeically when the Arab world was occupied by the Turks for centuries before Sykes-Picot)?

A more convincing approach is offered by institutional theory. Institutions are the “rules of the game” in a given society, shaped by legislation and history.

Without elaborating further on these issues (which are discussed in the thesis), it should become clear how these patterns contributed to both the Arab uprisings and their failure. Given that the demands are still relevant and the experience of the power of the youth and the streets has not evaporated, what lies ahead? 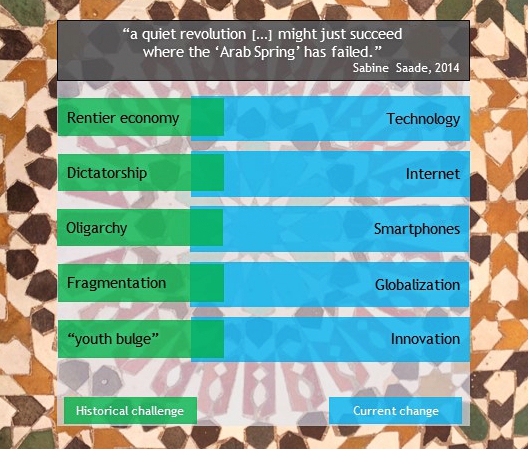 Future: “Trust in dreams, for in them is hidden the gate to eternity”

Technology is a strong force for change. Emerging markets are driving the world economy by leapfrogging (customers that never had a landline suddenly own a smartphone), and they benefit disproportionately (consider carpooling apps that are a fancy tool in cities with functioning public transport, while Cairo and Amman barely have a schedule for busses.)

The region is also one of the world’s youngest, and young people embrace the internet in large numbers. The combination of a generational shift as young people embrace new values and technology becoming abundant and affordable provides fertile ground for entrepreneurship. Thus young people are becoming their own employers and are starting to solve pressing problems from education, energy to finance and garbage.

This - technology, emerging market dynamics and the young generation - is now encroaching on the old centralism, inflexibility and fragmentation. Entrepreneurship is the opposite of both the brain drain and religious fascism. This is the startup spring. This is the revolution that “might just succeed where the ‘Arab Spring’ has failed”. It has picked up only recently yet holds the potential to change the region forever, precisely because it is a silent revolution - one that focuses on mindsets, daily routines, and individual decisions made by revolutionaries which avoid both fruitless demonstrations and disgusting acts of violence.

To be sure, whoever claims to know the future especially of a volatile region such as the Middle East is a charlatan. Yes, the degree to which various countries embrace and benefit from entrepreneurship is going to vary. And yes, it will take time – probably that of a generation.

The young people I have been talking to during my field research in Amman left little doubt, though, that they will take eventually their place. These conversations brought to life the convincing yet abstract concept of human empowerment. Narratives are incredible powerful: that is why so much depends on how many people in the region start to believe in their potential and that of the region.

Well positioned at the cross-roads of Asia’s emerging markets, Europe’s developed economies and Africa’s rich continent, the Arab world could turn once again into the center of trade and commerce it has been for centuries.

The one thing the region really lacks is simply a vision: a project that unites, mobilizes, and empowers the potential of its people. This is the ultimate power to be found in entrepreneurship - it offers a vision that revolves around knowledge, regional cooperation, and inclusive institutions. This is how we rebuilt Europe a few decades ago. This is how Asia is rising now. And if you want, tomorrow the Arab world.