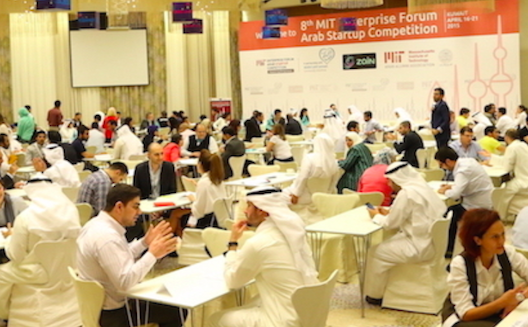 During one of the mentorship sessions of last year's 8th edition of the Competition. (Image via MITEF Arab Startup Competition)

The MITEF Arab Startup Competition have announced the 78 teams qualified for the second round of its ninth edition.

With over 15,967 individual and team applications (comprising over 16,500 entrepreneurs) from 21 countries across the Arab region, it was a record number.

The competition revolves around three tracks: Ideas, Startups, and Social Entrepreneurship, with the total prize money on offer in excess of  $150,000.

Each of the three tracks will award the first three ranked winners with cash prizes in addition to many other benefits including: top tier training, mentorship, coaching, media exposure, and networking opportunities.

“We are looking forward to having regional exposure, meeting investors and getting the judges feedback,” said founder of Kuwaiti startup Ajar Online, Shaheen AlKhudari, in a chat with Wamda. His platform allows users to collect and pay rent anytime and anywhere.

“Particularly noteworthy is the significant increase in applications received from Saudi Arabia, from five percent last year to nearly twenty percent this year,” said Hala Fadel, chair of the Board of MITEF Pan Arab, in a statement.

Organized in partnership with Community Jameel, the corporate social responsibility arm of Abdul Latif Jameel, and Zain Group, a mobile telco servicing the Middle East and Africa, the MIT Enterprise Forum (MITEF) of the Pan Arab region also announced that the final winners’ ceremony would be held at King Abdallah Economic City, in Saudi Arabia on April 14, 2016.

The selected 78 teams will start receiving entrepreneurship-focused training at pre-boot camps scheduled to be conducted in Egypt, Jordan, Morocco, Saudi Arabia, and the UAE later this month and in early March, and will start working to achieve specific deliverables in their consecutive tracks.

“I believe that the MIT Arab Startup Competition is one of the key events in the MENA that allows startups to grow, expand their networks and gain experience from influential serial entrepreneurs in the region,” said Lebanese young entrepreneur Stefano Fallaha, CEO and founder of fallound, one of the 78 semifinalists.

On April 13, during a four-day final event in Jeddah, Saudi Arabia, 10 finalists will be announced from each track. These short-listed teams will pitch their ideas to a panel of investors and successful entrepreneurs on April 14, and the final three ranked winners of the Ideas, Startups, and Social Entrepreneurship tracks will be announced and awarded cash prizes during a gala dinner that same evening.

Also during the day, a MIT Technology Review Pan Arab conference will be held.