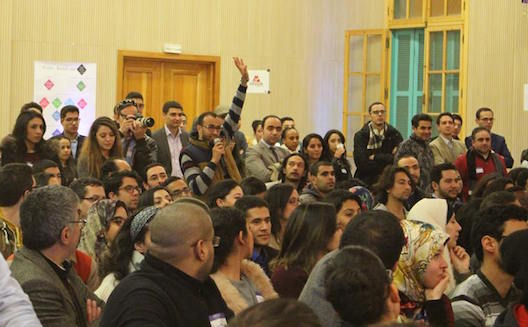 The audience is taking the floor during the 28th Pitch Lab. (Images via New Work Lab)

Greater Casablanca governor Khalid Safir and Mustapha Bakkoury, the governor of the Casablanca-Settat region  as well as head of the Moroccan Agency for Solar Energy (MASEN) were among the 250-strong audience on February 23.

“By being here today, I take responsibilities and certify that we will do everything we can to make those topics [of employment and training] our priority within the region,” he said, in collaboration with the governorate, Regional Center for Investment, and the Chambers of Commerce.

Safir and Bakkoury had been, discreetly, paying attention to the startup ecosystem for a year, Pitch Lab founder Fatim-Zahra Biaz told Wamda.

“Since its launch in November 2013, the goal was to give entrepreneurs a stage to present their companies, to get publicity, feedback, and why not first clients,” said Biaz, who also founded New Work Lab, the coworking hub behind the Pitch Lab.

The first startup to take the stage was Beekast, who offers a digital toolkit to help event organizers and participants interact.

The startup, created by French-Moroccans, counts over 200,000 users and 40 key accounts including Google, Microsoft and EDF. The startup, however, chose to be based in France to benefit from a more developed startup ecosystem.

“In Morocco, there’s no VC, no business angels club, we’re not talking about fundraising all the time […] but it’s coming, especially thanks to the work that some players, like the New Work Lab, are doing,” said founder Said El Haddati.

But the public voted for Casablanca startup The Wall Games, which develops video games based on Moroccans’ daily life. The Wall Games founder Yassine Arif won over the audience with his humor and sharp responses. The game is available for download today. 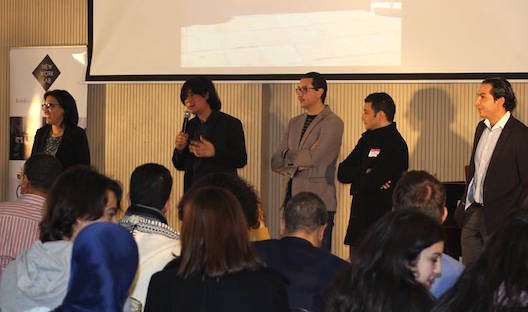 Winner Yassine Arif thanks the audience for voting for The Wall Games, on his left are the other pitchers.

Mozaic Parking founder Amine Charibi focused on the parking issue. The service allows drivers to share their private parking spots when they’re away, therefore optimizing parking, a major issue in a city suffering from traffic jams as bad as in Casablanca.

Manageo.ma was a digital solution helping Moroccan SMEs to efficiently manage their activity, thanks to software designed for specific Moroccan management issues.

Moroccan entrepreneurs and their ideas are maturing from copycat concepts adapted from Europe and the US to truly local solutions to local problems.

In spite of their focus on the national market, most of them have ambitions to expand abroad, either in MENA or in Africa.

Next month, the Pitch Lab will be organized in Rabat, in partnership with Moroccan CISE, a  coworking space and incubator opened to impact entrepreneurship, and a major player the entrepreneurial scene in Rabat.