In May 1976, a California securities regulator wrote to the venture capital fund Kleiner Perkins to deliver a warning about the riskiness of its $100,000 investment in Genentech, an early biotechnology start-up. “We are in the business of making highly speculative investments,” its co-founder Eugene Kleiner retorted calmly.

Silicon Valley’s “adventure capitalists” have provoked scepticism and sometimes hostility since Kleiner Perkins became the first partnership to open an office on Sand Hill Road — the nondescript highway that became northern California’s equivalent of Wall Street — in 1972. Paul Graham, an influential technology investor, described them as “the classic villain: alternately cowardly, greedy, sneaky and overbearing”. Another critic denounced them as “soulless agents of Satan”.

Yet half a century later, while “software is eating the world”, in the words of Marc Andreessen, co-author of the groundbreaking Mosaic browser, venture capital has eaten the stock market. Apple, an epitome of Californian technology risk-taking, has reached a market capitalisation of $3tn. Facebook, Google and Elon Musk’s Tesla dominate investment portfolios.

The Genentech investment shows why: Kleiner Perkins made a return of 42 times on its first investment fund after Genentech went public in 1980 at a heady valuation. This proved the power law of venture capital: a small minority of investments produce most of the returns. It only had to get right a couple of financial bets out of many to generate big profits. 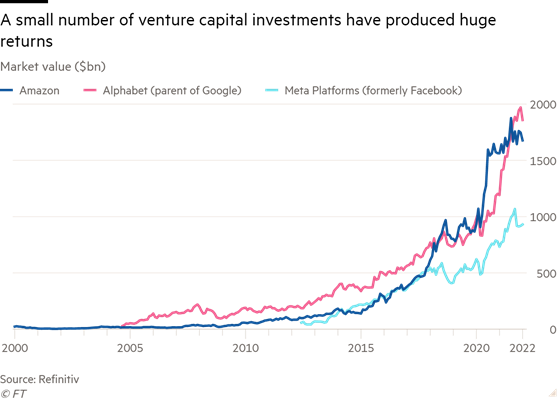 Sebastian Mallaby’s sweeping and authoritative history of the venture capital revolution, from its cottage industry roots in the 1950s to its colossal influence today, tells an undercovered tale. More attention has focused on the entrepreneurs who remade the world with technology, such as Jeff Bezos, Elon Musk and Mark Zuckerberg, than those who backed them.

Mallaby remedies it with The Power Law. A Brit who is a senior fellow of the Council on Foreign Relations is not an obvious Boswell to a cabal of American financiers, but he sympathises with their contrarian cage-rattling. If not scintillating, this is a worthy successor to (2010) and (2016), his acclaimed books on hedge funds and Alan Greenspan, former chair of the US Federal Reserve.

The venture funds dotted around Palo Alto and Menlo Park, from Benchmark and Sequoia to Andreessen Horowitz, the fund co-founded by Andreessen, exert extraordinary influence. Their financial backing has given all manner of disruptive enterprises an imprimatur, from social media platforms to today’s cryptocurrency and blockchain hopefuls.

The Power Law is comprehensive to a degree that occasionally tests the reader’s patience, but Mallaby enlivens it by diving into the personalities, and the tensions, behind the industry’s evolution. They include the loquacious Mike Moritz (now Sir Michael) of Sequoia, the mercurial Andreessen and Peter Thiel, the vengeful libertarian behind Founders Fund.

The question is, as Mallaby writes, “Did the VCs create the success, or did they merely show up for it?” In the early days, they played a big role. There were fewer investors then willing to stake money on risky ideas, and funds often worked “with entrepreneurs in an entrepreneurial way”, as Tom Perkins of Kleiner Perkins phrased it. In other words, they dispensed a lot of advice.

Mallaby attributes this alchemy to a “combination of laid-back creativity and driving commercial ambition” boosted by “a frank lust for riches”. A key venture capital insight was to invest in founders as much as technology, since the latter was impossible to assess. It was easier to identify individuals, often ambitious immigrants, who would not tolerate failure. 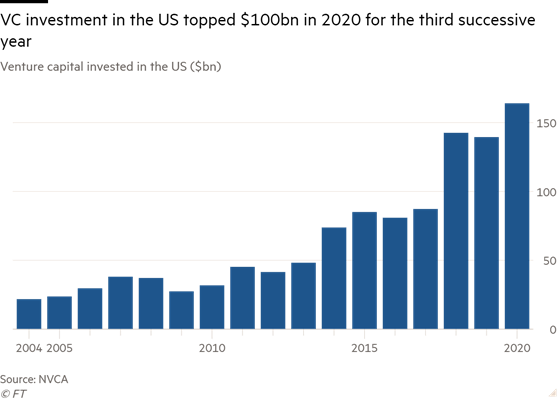 But as more investments produced outsized returns (Sequoia and Kleiner Perkins jointly put only $24m into Google in 1999; when the company went public five years later, it was valued at $23bn), entrepreneurs’ self-regard grew. If capital was easy to snare and they were the key to success, how much did they require the Moritzes of the world? Many founders, such as Zuckerberg at Facebook, thought Sand Hill Road’s old guard were being paid to show up.

Thiel turned resentment into a philosophy, arguing not only that venture capitalists offered little more than cash, but that their oversight actively caused harm. Since the most original founders were “arrogant, misanthropic, or borderline crazy”, it was best to let them go their own way. Mallaby notes that several early employees of PayPay had built bombs while at school.

The revolt coincided with capital becoming much looser. Sand Hill Road had prided itself on investing limited amounts discerningly, but its success produced a wall of money. Masayoshi Son of SoftBank muscled his way into a $100m investment in Yahoo in 1996 by “shooting from the hip”. Benchmark’s $1bn fund in 1999 was 10 times the size of its first one, four years earlier.

It was bound to end in tears and it did so at Uber, where Benchmark had to plot to defenestrate the wilful co-founder Travis Kalanick, and at WeWork, whose guru-like leader Adam Neumann was brought down by a failed attempt at an IPO. The saving grace for Sand Hill Road was that no big name invested in Theranos, the fraudulent blood-testing start-up founded by Elizabeth Holmes.

The scandals produced a bit of humility among a group to whom it does not come naturally. In the wake of the WeWork debacle, Son recanted on making companies grow “crazier, faster, bigger”. But SoftBank and its Vision Fund have not stopped taking bets with other people’s money, and Sand Hill Road is still chasing the next big thing with crypto.

Something will go wrong, but how useful is it to warn of that when history suggests the opposite lesson? Venture capitalists’ secret has been to look through the doubts and “imagine . . . what can happen if everything goes right”, as Moritz told Mallaby. Despite the industry’s nasty side, including its male-dominated, testosterone-tinged culture, it has changed the world.

Mallaby concludes judiciously that “venture capitalists as a group have a positive effect on economies and societies”. They have unquestionably proved powerful. Behind Facebook, Google, Uber, SpaceX, Amazon, Deliveroo and all of the rest were venture funds with unbounded financial appetites and very strong nerves. You kind of have to admire it.