In Lebanon, the smartphone market is rapidly growing, predominantly on Android which is in the lead, and iOS, which is just a few steps behind; a quick look at the iOS store reveals trends across the market.

While the top applications on the iOS App store are constantly changing, we noticed a couple of weeks ago that the applications in the lead are mostly oriented towards entertainment and gaming oriented. So those look to expand in the Lebanese market or target Lebanese users may want to develop in these categories. 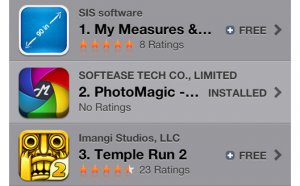 Here is the ranking of the top ten free applications listed in Lebanon last week:

In the paid application section on the store, WhatsApp is still the most popular app, with 470 ratings.

For Social Networking, the first ten applications are:

Even though the most popular application among social networks is a joke application (Nekat Freestyle), having Twitter, Facebook and LinkedIn appear in the top 10 is a sign that all content producers can take advantage of the growing popularity of mobile by posting on these social networks.