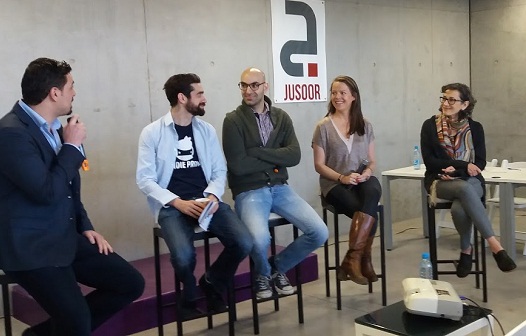 Language is a critical issue for Syrian entrepreneurs: it’s both an opportunity and a challenge.

Many Syrian startups, such as Arabic coding platforms BitCode and Remmaz, which tied in first place for the Startup Track Award at the Jusoor Entrepreneurship Competition, are operating in Arabic, and finding a market in that as well.

“The main problem that we as Syrian youth now face is the crushing of opportunities, and the lack of competent education and skills-training,” Syrian entrepreneur and founder of BitCode Tarek Sheikh Al-Shabab pitched at the event.

The People's Choice Awards went to Sanad NGO, which provides coworking spaces for entrepreneurs in Syria, while an exceptional jury's award was granted to the founder of water-purifying startup NobelChemist, Louay Otba, for his exceptional perseverance during the war.

Only one of the 18 pitches at the event was in English; the rest were all in Arabic.

This language barrier is an unfortunate consequence of the fact that modern standard Arabic was the primary language of education in Syria before the war.

“There is a real need to address the gap in market skills,” Qussai Maklad, cofounder of Share, which won first place at the Social Track Awards, pitched at the event. “We’ve organized 17 workshops in the previous year, of which 1800 individuals have benefitted, and a lot of the trainings were in Arabic,” he said.

While the judges applauded these admirable initiatives, they nevertheless stressed the importance of communicating in English.

"Investors abroad need to hear you pitch clearly, and to be clear on what you want from them when you contact them in [English]," TechWadi board member and speaker at the competition Rama Chakaki advised the startups.

The 40 young founders who attended the discussion and pitching competition in the Beirut Digital District basement, were just like those in Cairo or Dubai - brimming with excitement and enthusiasm.

They soaked up advice that is becoming more and more customized to MENA’s ecosystem, rather than simply taken from Silicon Valley. Here are some of the gems: 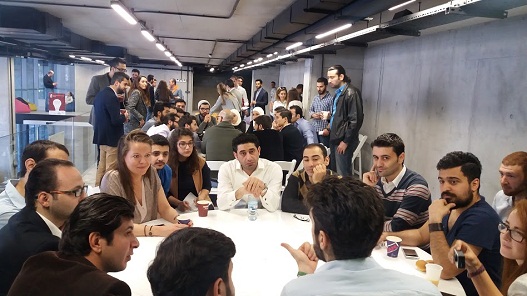 Rountable discussion with Belfrage and Nabti.

You don’t have to scale to MENA

The challenge for any startup is to address challenges that are present at home and abroad.

AltCity cofounder and CEO David Munir Nabti said this could be difficult for Syrian entrepreneurs, who were working under extreme conditions to meet needs that might not be present elsewhere in MENA, constraining them from expanding regionally.

"You might make a lot of money in Syria, but your idea might not be applicable [in MENA], and that's completely okay," Nabti said to the audience.

However, he offered the sage advice to, "think of the problem you are solving in a global context". If you’re addressing an issue around refugees, your solution may be applicable for a country with an influx of refugees, he said.

The way you approach investors is very important

Instead of accepting their current position as a disadvantage in their negotiations whith investors, Syrian entrepreneurs should tap into the ‘feel-good’ nature of the mentoring business.

"Make capital and company together as a team," Belfrage said. "Come with the approach that 'we need each other to grow, we're equals."

"The biggest emotional drive-work that we use in our work in [connecting people] is vanity… We can make well-connected people feel good about themselves, and utilize them as mentors."

Leverage diaspora and build a community

Every MENA country has a diaspora, and local entrepreneurs should put it to use to further their causes and businesses.

"You have a legacy of fantastic Syrian entrepreneurs in Silicon Valley that you can leverage, like Ali Diab [CEO at Collective Health] and Omar Hamoui [AdMob founder and CEO]," Chakaki advised. "Use that to build a community."

But building a community has an essential component: coworking spaces that unite startups.

"These kinds of spaces are incredibly valuable, because they emphasize the values of the groups and subgroups that create them, like people interested in gaming, or edtech, because the end goal is not to just have people sitting next to each on a bench," Nabti said. 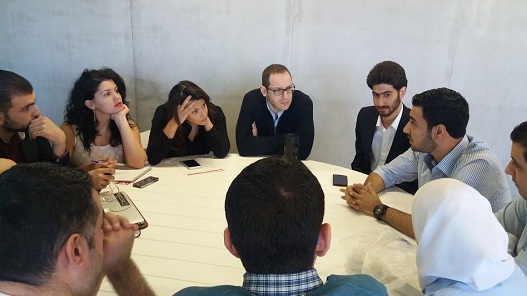 Hala Fadel and Omar Christidis were among the judges of the competition, and held a roundtable discussion as well.

"Partnership is a completely under-utilized tool for young startups," Haddad said. "They are great ways to access new markets, especially if they're corporate partnerships. This is what I did with Yamli in the beginning; we partnered with a bunch of startups."

One important advantage that entrepreneurs gain from partnerships is access to skills they may not have otherwise, which helps them avoid failure.

"That's the power of communities. It helps you use your networks to seek help, and this is what we're doing at Wamda."

Bootstrapping is not so bad

People pushed into extreme situations often come up with innovative solutions to reach their goals - often in ways they wouldn't have thought of had they had access to traditional startup seed or venture funding, Haddad said.

"Entrepreneurship is all about cutting corners, and your ability to go out of route to get what you want," Haddad said. "Bootstrapping is the magic of building the company without outside money. It pushes you toward being more much more productive and innovative."

Venture capital money, on the other hand, could make entrepreneurs overspend and feel safe and relaxed.

Haddad said at the end of his personal journey with Yamli, the startup he founded, he had only raised $125,000 for his startup. "By the standards of today [it’s] nothing," he said. "It gave us a lot of momentum to push forward."

It doesn’t matter where you’re from, the same rules apply

"I was very humbled after joining a Skype session for a [previous event] for entrepreneurs in Damascus last year," Belfrage said. "And I realized that all the questions asked were the same questions that entrepreneurs in Silicon Valley or Stockholm were asking. That's important to remember."