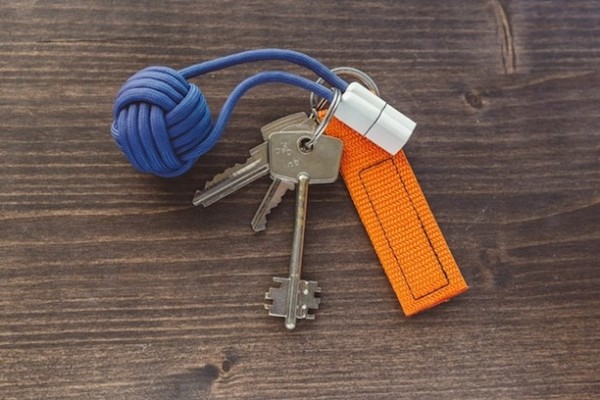 A nifty charger that won't weigh you down. (Images via BOLD Gadget)

As technology still lags behind the growing demand for longer phone battery life, two Palestinian entrepreneurs are trying to find a solution with a new portable charger.

Lama Mansour and Ismat Taffaha are crowdfunding the launch of BOLD Knot, a small, quick-charging key ring charger, through IndieGogo. They say it can store enough power to give another three hours of “talk time” or two and a half hours of internet access.

Building a hardware prototype in Palestine has however proven to be their own Gordian Knot. They started the project in May 2014 and had a prototype within a month, yet although they knew how to run a startup and source components, Palestine’s unique situation forced them offshore. Their startup BOLD Gadget is now based in Estonia, working from the Buildit Hardware Accelerator.

“When we came to printing the circuit board, we discovered that half of the components we needed were missing in Palestine, and that we cannot easily import any of them from abroad,” she told Wamda. “We were able to ship ready printed circuit boards (PCB) from China but each shipment cost a lot and took about a month to arrive due to border checks.”

There were no 3D printing nor any other prototyping facilities available and the duo found they couldn’t build any of their ideas to prove to investors or entrepreneurship support networks that they were “for real.”

“The trigger moment came after accumulations of frustration over the poor startup ecosystem in Palestine, the lack of facilities and resources, and lastly our inability to take our startup to the next stage because of all these reasons.”

Having only moved to Estonia in March this year, Mansour still seems a little shocked at the opportunities available.

“We moved from being in a country where we never saw a proper 3D printer or PCB facility, to a country where we had the most advanced 3D printer and PCB facilities in the team room where we're staying and working,” she said. “We literally jumped with the project from a very basic point to a very advanced point in no time because of these facilities.”

The IndieGogo campaign started on May 19 and is intended to fund beta testing and manufacturing, and have the product hitting doorsteps in the US, Europe and the Middle East by October.

The BOLD Knot itself integrates currently available technology into a portable design. The battery units sit inside the knot, located in such a way as to maximize the number of units able to fit within the sphere. It’s compatible with all phones, be it an iPhone or Android, and can be used with tablets.

Other keyring-sized rechargers on the market today include the Popcord which launched in February 2014, a keychain data-sync and power cable, and the increasingly common phone case battery chargers.

The BOLD Gadget founders believe their edge is speed and design. Combining a power circuit and an embedded ‘fast’ USB cable into the device allows it to charge twice as fast as others on the market, and the parachute-cord exterior is durable and fashionable.

“The idea came after we started developing a previous product (a mini wall socket charger) and then out of our market research into it, we found out that 11 percent of people carry battery packs when they go out but they only need them towards the end of their day out,” Mansour said. “We decided to create a battery pack that has the necessary juice to add a battery life for these hours only while still being very small and portable. Other solutions in the market are bulky, heavy and require an external cable."

BOLD Gadget is in the process of developing three other products, with two in the early prototype stage.

Mansour wants her startup to be the first consumer electronics company in Palestine, but a headquarters outside the region is essential.

“We believe that managing the startup is possible in Palestine, but running R&D, manufacturing and prototyping operations are quite difficult. For this reason, we believe that if we were able to put our company on the right track, we should at least have a headquarter in an open international environment.”