The agreement with Egyptian Resorts Company (ERC) is for a $2.5 million, 2MW solar photovoltaic power plant at the Sahl Hasheesh resort, and is designed to take advantage of the government’s feed-in tariff (FiT) scheme.

CEO Ahmed Zahran told Wamda that it’s a “big step” for the small company: its total portfolio is 5MW so the new plant will make up 40 percent of the business.

KarmSolar will lease 50,000 sqm of land from ERC while the developer will receive 2 percent of the FiT profits.

Egypt’s FiT scheme pays out more for larger projects in order to encourage large-scale wind and solar projects. The Sahl Hasheesh project will receive a rate of 13.6c per kilowatt hour produced, compared to 14.34c for the largest projects.

The ERC project is KarmSolar’s first on-grid power station, and it’s already finding out how slowly government processes can move. Although the company intends to have a campus set up in Sahl Hasheesh by the second half of 2016, the government agency in charge of the FiT scheme has not yet signed off on its end of the deal. As yet, Zahran does not have a date for when the station might be up and running.

ERC urban planner Josh Drake says the company wanted its showpiece resort, the biggest development project in Egypt, to be sustainable and in its budget had set aside land for some kind of renewable energy.

When Zahran came to the company with a ready-made proposal for a large-scale solar station, it was an easy-fit for the developer.

“Both ERC and KarmSolar want to develop a facility which will serve as a showcase for solar energy projects in the region,” he told Wamda. “With their architectural arm KarmBuild we believe they have a high level of expertise in reaching high quality and innovative design solutions."

Zahran is, however, keen to explain that this is not a wholesale pivot away from the company’s core speciality of off-grid solar installations. He says KarmSolar is the biggest off-grid solar power supplier in Egypt and this is where its competitive edge lies. 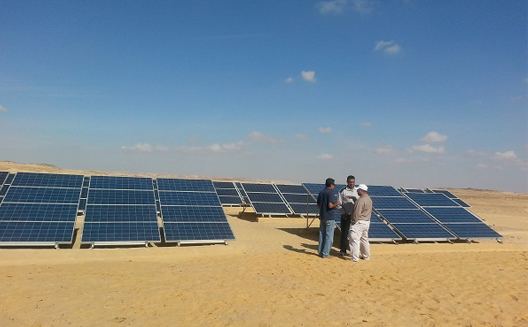 KarmSolar is pushing ahead with power purchase agreements (PPA) with private companies in Egypt, a structure that Zahran says they are pioneering in the country.

In April the company signed a deal with diary giant Juhayna to supply 1MW to a Western Desert site, which Zahran said was the first solar PPA between private companies in Egypt, and it also has an agreement to supply 150KW to the Marsa Alam resort Oasis Hotel.