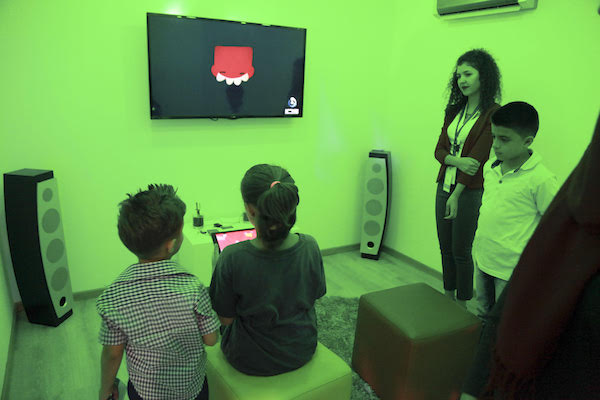 After completing a graduation project that turns any transparent surface into a touch screen, three engineers from the West Bank realized that their project could help rehabilitate children suffering from stress-related disorders.

They launched Iris Solutions in 2012 with $15,000 of their own money, with the goal of providing specialized immersive technology based on interactive touch screens.

And, while working on an array of touch tech projects in applications as diverse as healthcare and marketing, the British-Palestinian organization Medical Aid for Palestinians (MAP), approached Iris with a request that took the company in a new direction. MAP asked them to build the first sensory room in Palestine.

“We received quite good feedback from the specialists, from the children, from the mothers and so we saw there is a big opportunity here, in respect to quality and in respect to need,” said Ayman Arandi, cofounder of Iris Solutions.

After that initial success, they went on to install 15 sensory rooms in the West Bank and Gaza, serving over 5,000 children with various developmental and stress-related disorders, particularly autism spectrum disorder or post-traumatic stress disorder attributed to instability in the region.

So, the team began to look for ways to reduce costs and create a smaller product. Realizing that the software they were developing had massive value, they enlisted the help of psychologists and experts in behavioral disorders from around the world to help develop content while the Iris team built the first prototype of the Sensory Box. 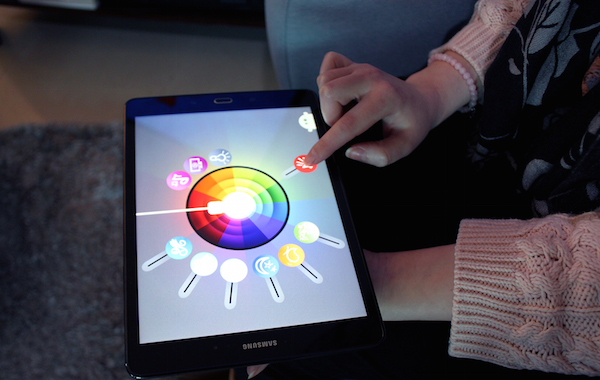 Sensory Box's interface is simple and easy to understand.

Their efforts paid off with Sensory Box.

The product is deceptively simple. Users replace standard lightbulbs with Iris’ bulbs, and install a dongle in their television sets. When activated, a child is able to control the room’s environment, including sounds, light intensity and color, via an app on their tablet. They aim to sell Sensory Box for around $4,500, a fraction of the cost of sensory rooms.

“The Sensory Box is an innovative and affordable approach to create a rehabilitation-friendly safe environment for both centers and household families who have children with stress or developmental disorders,” Arandi said.

“Through the controlled environment of light, sounds and interactive games, the sensory box offers a calming and stabilizing medium in which a child can connect easier with others,” he continued.

A provisional patent for their technology has just been approved in the US, Arandi noted.

Iris is doing well by many measures. After bringing in a total of nearly $1 million in revenue, (60 percent from general services they provide to their clients and 40 percent from the sensory related services), they’re now looking for investors to help them expand.

“We've invested more than $300,000 and 2 years of research into developing an affordable and portable sensory environment,” Arandi said. “Now, we’re looking for investors to help us scale sensory box regionally.”

They’re looking to raise anywhere between $750,000 and $1.5 million and believe their best first markets will be Palestine, Jordan, UAE and Saudi Arabia.

“We travelled to all these countries to start targeting the biggest rehabilitation centers in those countries, to hopefully offer [Sensory Box] to kids of families that are involved with these centers and possible create a royalty model,” Arandi said.

In the meantime they’re looking for the right partners to help them grow Sensory Box regionally and eventually internationally. They’re keen to talk to international investors who can help them enter the US market. 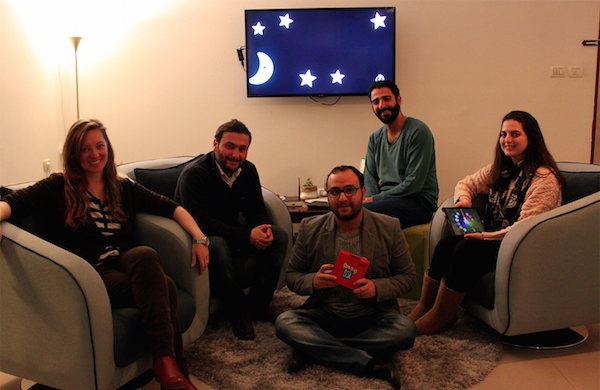 With all their success, the team at Iris faces substantial obstacles as a result of their location. For instance, Israeli customs holds the hardware they import to build their products for months at a time.

“It’s a nightmare for us. Sometimes we pay bills and taxes on the goods, we don’t know where they’re coming from,” Arandi said. “And sometimes the goods never come. One year we bought three projectors and they got stuck at the port for 6 months.”

To get around these restrictions they’re looking to open an office in Jordan in the very near future.

So why didn’t Arandi and his team leave sooner?

“Its part of giving back to our society and country,” he said.” Promoting economic development is part of resisting the occupation. There are opportunities everywhere, and Palestine has opportunities too.”